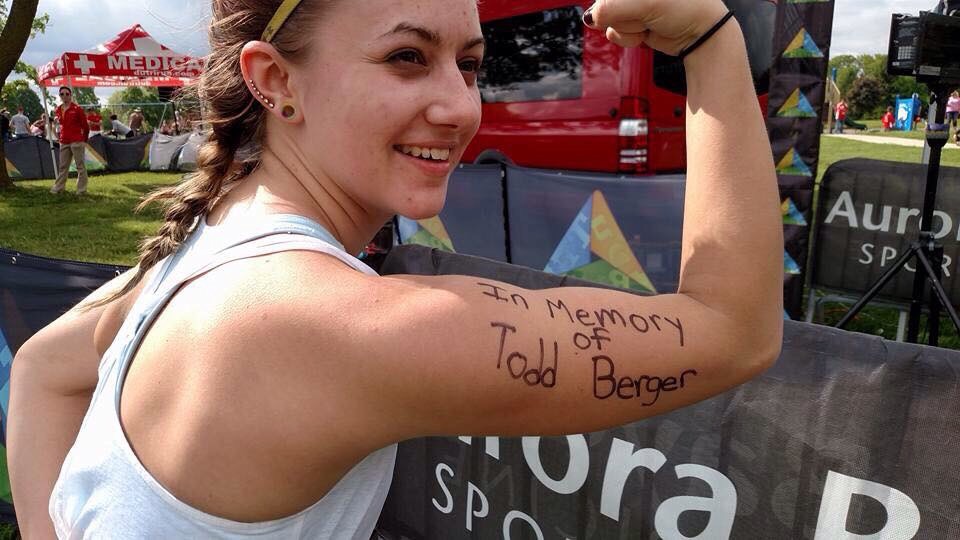 On Sept 10, 2017 Karlie Kiel’s life changed forever. On that day, Kiel became an Ironman, swimming, biking, and running a total of 140.6 miles. What completing the Ironman proved to be, was much more than finishing one of the most difficult endurance tests, but rather the start of a new life.

Kiel’s journey started in 2015, after she attended a motivational seminar called Unleashing the Power Within. After which, she told herself she would no longer let her depression and struggle with anorexia control her life. Leaving the conference she was ready for change. However, upon returning home, Kiel’s life flipped upside down.

“I was scrolling through Facebook, and I remember thinking it was all a joke. But the day I got back I found out that my best friend, co-worker and someone who had helped me overcome my own depression had committed suicide,” Kiel added, “To hear that my friend Todd had been struggling with his own depression and I had no idea was just a shock.” The high she was once on, turned into the greatest low she had ever felt. But 2015 was far from over.

Three months after the passing of Todd, Kiel found out her grandmother’s cancer was terminal. Shortly after her grandmother’s death, Kiel was emotionally and physically damaged by man she loved. To cope Kiel began working out.

“Working out became one of the only ways to numb the pain” she explained. “I found that I was able to run faster, bike farther, and lift more than I had ever done before.”

Kiel opted to try a sprint triathlon, a race that is one quarter the distance of an Ironman. After finishing, she was hooked.

“I heard about the Ironman from a co-worker and the seed was planted and I was ready to take on the challenge” Kiel stated.  “I was ready to train a whole year and prove to myself that I could take back control of my life.”

Kiel knew that training was going to be an uphill battle. She was diagnosed with anemia, a disorder which according to Mayo Clinic causes your body to not produce enough red blood cells which carry oxygen throughout the body. Kiel stated, “Training did not test so much my physicality but rather my mentality.”

“It was easy to motivate myself because I would just think of what Todd or my grandma would say. And how proud they would be.” She continued to note, “No matter what happened in my past, this was going to be my redemption.”

The year of training quickly ended, and it was finally time for the Ironman. As the race started, Kiel knew she would be in the back of the pack. However, her purpose for racing was never to place. “I wasn’t running the Ironman to impress anyone. It was solely about me and wanting to accomplish something.” Kiel expressed.

The hardest moment in her whole journey took place during the biking portion of the race which is notoriously difficult at Ironman Wisconsin.

“I sat down on the edge of a curb ready to quit. Dehydrated and exhausted I was ready to call over the medics and end right there. I remember looking down at my arm where I wrote “In memory of Todd.”

“Todd would have told me to keep going and to finish what I started or it would all be for nothing.”

Kiel finished on the bike and made the time cutoff by 30 seconds. But she still had 26.2 miles of running between her and the finish line.

As her friends and family cheered her on in the last seconds of the race, she finally crossed the line. The announcer’s voice came over the speaker, “Karlie Kiel you are an Ironman”. At that moment Karlie started crying. Though Kiel failed to cross the finish line under the 17 hour cut off mark, she had completed the full 140.6 mile distance and accomplished her goal.

“My whole life has changed and I will never be the same. The Ironman meant a lot and I am now a whole new person.” Karlie tearfully stated. “No one will remember me as the depressed girl I once was, but now the girl who did an Ironman.”

“I hope to inspire someone who feels like they want to give up. I want them to know they have the power to change their life for better. I hope someone hears my story and know that they can’t give up.”

If you, or someone you know, needs someone to talk to regarding depression, sexual assault, or any other struggles, The UWL Counseling and Testing center offers many services that could help as well as the resources below.