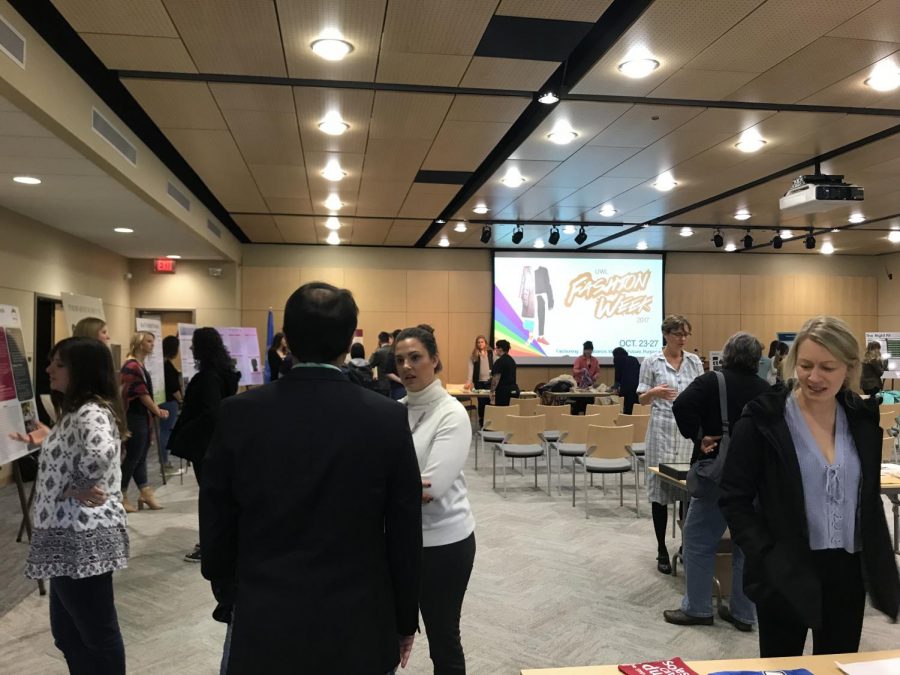 The beginning of a tradition for the University of Wisconsin – La Crosse, Fashion Week, was an impactful and meaningful event. On Friday, presentations in the Hall of Nations gathered for the Fashion Week Symposium that entertained guests with projects and students to challenge our beliefs on human rights, environmentalism, body image, and much more.

Caroline Nickerson presents an exhibition entitled, “Made in the USA: Prison labor in the Clothing Industry” in which she discusses the issue America has with using prisoners as paid less workers, similar to a sweatshop atmosphere.

Nickerson says, “Outside cooperation’s come in and say that they will pay prisoners to sew and make clothes, but what happens is the head of the companies receive all of the money because in the constitution it quotes that slavery is illegal, but if they are prisoners, it is allowed.”

The idea for this project came from the Netflix original, Orange is the New Black. Nickerson adds, “I was watching Orange is the New Black and did a little research and discovered that this actually happened in South Carolina with the company Victoria’s Secret, so the items could still say ‘Made in America’ even though they were being produced by inmates and not the average worker.”

It gets closer to home when Nickerson ends the presentation with, “These prison made products are sold in more common companies than people think, they sell at Walmart, K-Mart, the coffee sleeves at Starbucks, and even the employee uniforms at McDonalds.”

On the environmental side, Abbey Driggers and Samantha Kohnle share, “Reduce, Reuse, Refashion – Upcycling” a project in which they share why to upcycle.

Kohnle tells where the idea originated from, “We started with the idea of fast fashion and the globalization and the production time of clothes. Considering it is so fast, people tend to toss their clothes out right away and go and buy new clothes because it is so cheap.”

She goes on to talk about the harsh conditions of the sweatshop workers who are making the clothes people replace every day, “They work in rough areas and are only paid fifty dollars a week. Many of them get skin disease from dying the material.”

Driggers discusses how she uses upcycling in her life, “I try to reuse outfits a lot and mix and match what I wear so it is all versatile. We are promoting upcycling in hopes that it decreases the demands for clothing.”

With body image impacting almost all of us, Rena Duell and Taylor Bekkum took the time to address the body image issues that have changed through the years with their project, “The Ideal Body Type Through the Decades.”

Bekkum introduces the project by saying, “Body image is an issue that impacts everyone, and we wanted to use it as our idea to show that no one really knows what the true body type is because…  it changed dramatically from the decade before.”

Duell adds, “There is not one perfect body type and that is what we wanted to show. The idea of body image is constantly changing and although we have made great strides towards the body positive movement, there is still room for it to grow.”

Terry Lilley, one of the many people in charge of “Fashion Week” shares, “An alumni gave me the idea to begin ‘Fashion Week’ after her presentation on ethical fashion.”

Lilley describes his passion for social justice and the root of events like Fashion Week, “I am a social justice researcher and when I was a graduate student I took a lot of culture and sociology classes and a few fashion courses. I have always been interested in fashion because it represents a specific lens in which you can see a lot about social justice, environment, gender, labor, consumption, and production.”

Lilley goes on to discuss what fashion means, “Fashion is a way we can address a lot of social justice issues in a way that brings people to the table that may not be interested in social justice, but fashion intrigues them. It is seen as trivial because it is associated with the feminine and therefore it dismisses the feminine which further generalizes the idea of gender and sets up a lot of important questions.”

Fashion Week was a  reminder that social justice is in every aspect of our lives.