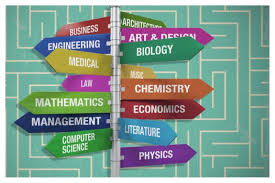 Picking a major is easily the hardest decision a college student will have to make. Between doing something practical and following their dreams, students are often caught in the crossfire of decisions. I asked five University of Wisconsin La Crosse students their reasons for picking their college majors and here are their responses.

Mary Franitza, Junior at UWL with double majors in Spanish and Women, Gender, and Sexuality Studies, found her calling in the attitudes and behaviors of her professors. She says of the WGS department, “Everyone is looking out for you and everyone is on your team. Even professors that I barely know; I can set up a meeting with them and it isn’t weird at all.”

With Franitza’s Spanish major she comments, “It is a smaller faculty department, but they make an influence on their students.”

Double majors like these may seem like they do not have any relation, but Franitza adds, “I enjoy them together because of the intersects. I can be in a current events class for Spanish and learn about woman’s rights in Nicaragua.”

Victoria Lee, a sophomore majoring in Recreation Management with an emphasis in Outdoor Recreation, shares how she found herself in an uncommon, but completely desirable major in a world outside of college. Lee says, “For several years I have worked at Girl Scout camps during summer and I think it is a great way to get people outside because there are so many benefits that people may not see at first.”

When asked what she wanted to do as a future career, Lee states, “The details are fuzzy on what I want as a career, but I would eventually want to create gender inclusive outdoor experiences for people because outdoor pursuits are often seen as hyper-masculine.”

Lee, pursuing a lesser known major, does so with full confidence. She says, “People who know me saw the fit between the major and my personality, but when you have to go around in class and say your major and others hear me say ‘Recreation Management,’ they always ask what I’ll do with that, but the thing is, there is so much you can do with it.”

Choosing an unlikely major for a UWL student, but thriving in a program that proves itself on campus, Freshman Shane Flaningam, Musical Theater Major, depicts his journey to this choice.

Flaningam begins, “I chose this major because when I am on stage it feels like home. It is a whole different vibe; I am a happier person and nothing outside of that theatre can bother me. I am surrounded by people who love what I love. “

Flaningam goes onto add, “I know that me being on stage will make others happy, and that is my top goal in life – to leave an impact on others. It is not about the payment or the people, it is about everywhere this major can take me in life.”

Concluding, Flaningam says, “I just want to be on any stage. Hopefully Broadway, but any stage would be amazing.”

Amanda Krueger is a sophomore taking the safe approach of Biology major. She starts off with, “It really was a hard decision. It was mainly for my future because I want to be a pediatrician and be prepared for medical school with a more practical major.”

With her musical theatre background (one of her two minors), Krueger chimes in on the differences between a science track and an arts track, “I love finding ties between Biology and Theatre because I am very different from the average Biology student. Hearing my Biology professor talk about owls with the same passion that my theatre teacher talks about composers, proves that if professors are excited about the subjects they teach, that is what matters.”

A freshman and eager for medical school, Connor Zankle is completing a Biology major with a pre-medical track. “The influence came from my family and my older brother who is in medical school.”

With his future planned out, Zankle adds, “I have always seen myself as a surgeon and although BIO 105 is pretty tough, I am sure it will get better.”

It may be hard to pick a major but rest assured, the average college student changes their major four times. The most important thing is that you find something you love, and turn it into a job.