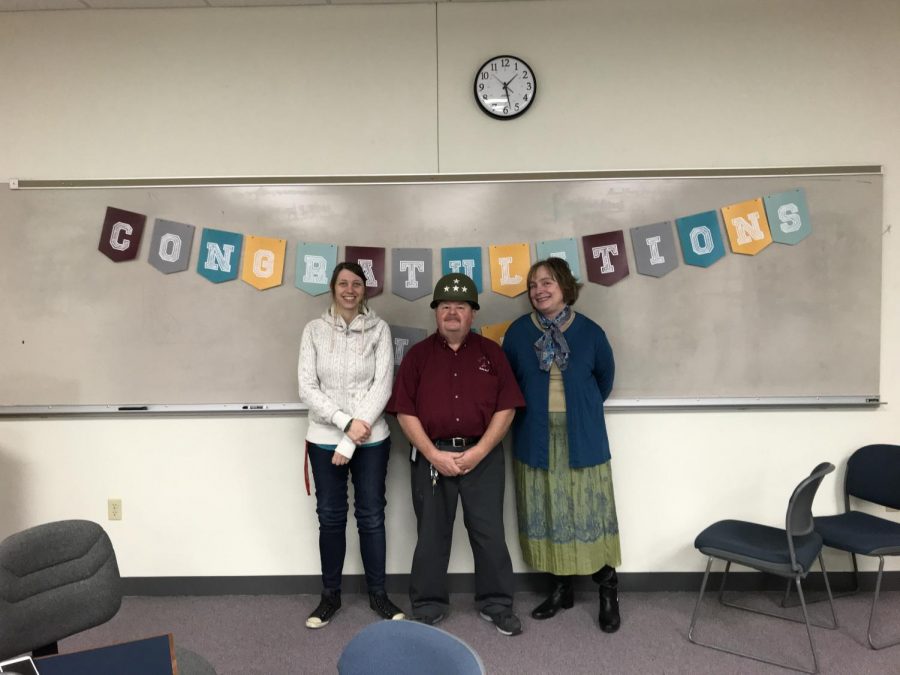 Good-hearted, helpful, reliable – just some of the words fellow employees at University of Wisconsin – La Crosse have used to describe Al Patton. Thirty-three years in the making, Al Patton, or as his friends address him, “The General,” will be retiring from the UW System. Patton, the lead custodian at Murphy Library, has demonstrated what it means to be not only a dedicated worker, but a passionate person on and off the job. In an interview with Patton at his retirement party, he disclosed his journey with the UW System and his co-workers.

Patton started with, “I began on November 12th 1984 at University of Wisconsin – Milwaukee. I was a custodian in the fine arts building for almost exactly one year. I left on December 1st of ‘85 in a blizzard to come to La Crosse. I spent my first eight hours here shoveling snow.”

During his years at UWL, Patton has been the face of many buildings. This including Cartwright, Whitney Dining Center, Graff Main Hall, and then into where the magic happens – Res. Life at Drake Hall. Patton commented on his experience of being a member of Res. Life: “I enjoyed working everywhere I did at UWL. Each place I worked I had a different reason to enjoy the job. Working in housing is different than main campus because of the sense of family Res Life provides.”

After six years in Drake Hall, Patton moved into the Recreational Eagle Center when it first opened. Soon after that, he was off to Morris Hall for two years, then a return to housing and finally, the Murphy Library in 2006. Patton was primarily a floater around campus so each job he had was never permanent, which was exactly what he liked the best. Patton noted, “I’ve been all over campus, even the old Reuter Hall building. You meet a lot of nice people around the campus who are always friendly and helpful.”

The people Patton met continued to be visible in his life even with every position switch he had. Gathered at the retirement party, friends, coworkers, and admirers sat down with a slice of cake and light refreshments to talk about just what it is they will miss most about Patton.

Dave Anderson, custodian service supervisor, had fond comments to be said about Patton, “I have known him his entire career. He always worked hard as a custodian and supervisor.”

Patton’s dedication to the job is something that always stood out to Anderson; he added, “Al is committed to the job and he has all the necessary knowledge to get the work completed. He is well-schooled in the custodial arts.”

Others chimed in one by one complimenting Patton on his character as well. Terry Stika, Murphy Library’s technician, said, “It will be hard to find a person who cares for this area as much as Al. He will be missed.”

Matt Hotlen, the second-floor custodian at Murphy Library jumped in as well. Holten reflected, “We worked together but we are also close friends. Al and I work as a team; if you needed something you knew he always had your back.”

As the conversation continued around the room, each attendee discussed the good nature Patton has continuously displayed. His co-worker, John Gray, said, “Al is always available for you. He wanted to go deeper in conversation, he could talk about non-work-related things and it was natural. He goes above and beyond in every form of the sense.”

Ingrid Iverson, another colleague, noted, “I’m going to miss having Al here to count on. If he sees something, he reports it, he takes care of it- he does the best work a person could do.”

A final comment from co-worker Domingo Carrion was a light-hearted glimpse of how Patton has touched all of the people around him. Carrion concluded the conversation with, “Patton is pretty decent – I’m just kidding, he’s very good. I met him at Wimberly on the second shift and ever since I’ve known him he has been nothing but a helpful person. Al is always helping others first.”

It is easy to see how Patton left a lasting impact on UWL and his friends and co-workers. Patton concluded, “I’ve been doing this for half of my life – this is my life, and I’m going to miss it.”