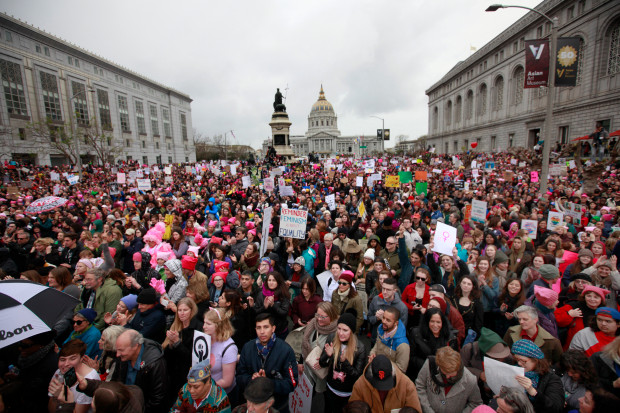 The 2017 Women’s March lead to more discussion about women in power positions, rape and sexual assault, inclusivity, and reproductive rights. The march served as an important reminder that the fight against the patriarchy is truly never over, but who is this fight serving? Your everyday woman, or a cis-gender, heterosexual, white woman?

Feminism is a turning point in our society as it defines human equality, but we reach error when we do not create intersectional feminism. Feminism without intersectionality is feminism for the white and privileged. The beauty of our advancement in human rights is including every type of woman on the list—trans women, women of color, LGBTQ+ women, and many more.

There are many questions surrounding the march, but the main one is focused on who it is helping. Critics at the USA Today said, “The march centered on cis white women at the expense of women of color, and trans women— both groups who many felt had more to lose under a new administration many saw as hostile to human rights.”

These women are left hanging while they are unrepresented in some of the marches across the world. They still do not feel included in the conversation because of the lack of representational intersectionality seen in this movement.

The recent #MeToo and “Times Up” slogans have also lead into the 2018 Woman’s March. Many people took to the streets focusing this year’s march on rape and sexual assault. Although rape and sexual assault is an issue for everyone,  keep in mind the racism in sexual assault. The Connecticut Alliance To End Sexual Violence says, “Sexism and racism are both tools of oppression, and the intersection of these attitudes make women of color particularly susceptible to sexual violence. They also may make it difficult for women of color to access support services or receive ail treatment within the criminal justice system.”

Rape and sexual assault impact one out of four women, but the exact percentages depending on race are staggering. Eighteen percent of white women will be assaulted, but nineteen percent of African-American women and thirty percent of Native American women will be assaulted at least once during their lifetime (Connecticut Alliance to End Sexual Violence).  The #MeToo and “Times Up” movement although great in theory, need to include women of color and these statistics prove it.

President Trump took to Twitter Saturday afternoon to chime in on his perspective of the march. He wrote, “Beautiful weather all over our great county, a perfect day for all Women to March. Get out there now to celebrate the historic milestones and unprecedented economic success and wealth creation that has taken place over the last twelve months. Lowest female unemployment in eighteen years! (Twitter.com)”

Although seemingly supportive, President Trump mistook the true meaning of the march. There was no celebration of success or milestones. In the last twelve months, the president has eliminated DACA, stood by sex predator Roy Moore and dozens more, and has failed to condemn the alt-right, along with a list of many other things that people were truly marching against, not for.

The Women’s March that I believe in serves as a reminder that things do not change unless we fight for them in America, and you have to be willing to enter the battle. I believe in embracing every type of woman and the unique differences that make us diverse. I believe in reproductive rights, but I also believe that we are marching for many more rights than that. I believe in a day where any type of person, regardless of gender, can hold a power position without being questioned. We need intersectionality in the twenty-first century or we will not succeed.

Ruth Hopkins, a Native American writer and activist, stated at the march, “We have to decide: Do we want equality and justice for a select group, or do we want it for everyone? We know all of these issues are tied together. Gender justice is related to economic justice and racial justice and we have to think about all these things” (USA Today).