UWL among community at March for Our Lives 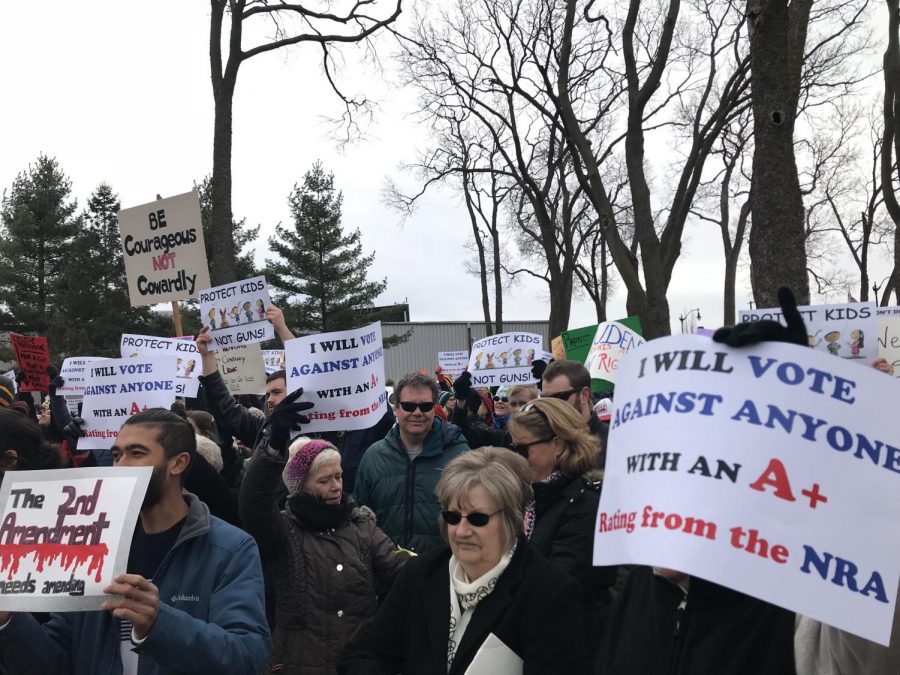 The song verse “A well-regulated militia is just what you’re not – good kids are dying everyday” could be heard echoing from the crowd of almost a thousand at the March for Our Lives rally on March 24th at Cameron Park.

Among the primarily older crowd, University of Wisconsin – La Crosse students joined the rally to march for the lives lost in mass school shootings and to encourage gun control in our country.

UWL sophomore Aprajita Singh commented on the event, “Gun violence needs to be stopped. The 45th thinks that he can arm teachers but they did not sign up to kill, they signed up to educate. We cannot stop violence with violence. I wish more UWL students were here today because thinking about changing something won’t do anything, you have to be supporting the cause in every way.”

Another UWL sophomore Sabah Khan said, “We all should care about this issue because it could easily happen at UWL. Even if it doesn’t we need to empathize with other institutions that this has occurred at. People’s lives are more important than your right to bear arms.”

Jessie Solberg a freshman at UWL did not stray away from the march even though being a new-comer. Solberg said, “I want UWL students to know that educating themselves is the first step to new learning. As students, we need to speak up about these issues so our future can be brighter. We need better gun control, period.”

Rev. Ben Morris took to the podium first to lead the discussion by stating, “Thoughts and prayers are not enough this time.” Morris, the twelfth-generation hunter against gun violence shared what he wanted the La Crosse public to recognize about the NRA, “The NRA does not speak for me. They are a small group of people that control far too much of our lives. They want you to believe that all hunters are anti-gun control but that is not true. I am a hunter and I know guns have no other purpose but to kill – any other reason is a lie.”

Another speaker, Mayor Tim Kabat took to the stand to read a proclamation, “March 24 is officially March for our Lives Day in La Crosse. We are marching so we do not have one more senseless death. This is a call to action and you must get involved.”

From a religious perspective, Father Brian Konopa shared his personal thoughts on gun regulations, “We have speed limits in this country and we need gun limits as well. Let us pray but also let us work towards ending gun violence.”

Many attendees were Central High School and Logan High School students. Marley Richmond senior at Central High stated, “Please do not turn my learning environment into a warzone. The excuses must end and actions need to begin. I am scared every single day I will be next.”

Professor Richard Breaux, of Ethnic and Racial studies at UWL, spoke about the NRA. Breaux said, “The NRA does not care about your, mine, or anyone else’s constitutional rights. The industry hedges in bets, no matter what party is in power.”

March for Our Lives in La Crosse brought many residents together and generated a variety of conversations throughout the community. Gretchen Guinn Paquette, member of Moms Demand Action ended her speech with, “This march is where our work begins, not where it ends.”