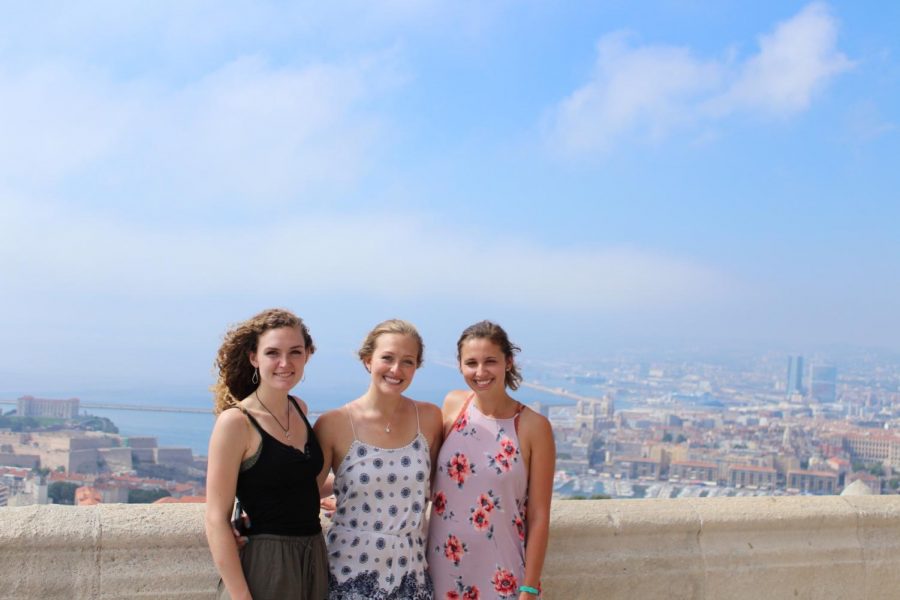 The University of Wisconsin-La Crosse prides itself in its’ support of undergraduate research. The Undergraduate Research and Creativity department’s (URC) said, “UWL is dedicated to supporting research and other scholarly and creative activities by students in all academic disciplines.” This summer, art students Julia Mielke, Rachel Alderton, and Lydia Reilly took advantage of UWL’s commitment to student research and travelled to Barbizon, France.

“A collection of prints were graciously donated to UWL over the past year that depict images of France and were created by artists who all attended the same printmaking school in Barbizon, France,” said Reilly. “Exploring the prints intrigued us all to research further aspects of the prints.” For Reilly, this meant the specific locations the prints depicted, visiting the present-day locations of the prints and creating new prints, while highlighting the differences between the two.

“It was incredible to see the locations that the prints presented in real life and to see how they had changed over time and their role in the everyday lives of French citizens,” said Reilly.

“My project was to compare the current culture and human interaction in the Barbizon region of France with that depicted in the etchings and lithographs of the mid-1800s,” said Alderton. “I decided on this project because the prints that were donated to UWL not only inspired me but captivated me. I have always concentrated on realism in my artwork and being a psychology major as well as an art major, I am also fascinated by human interaction and how we perceive others.”

For Mielke, the intrigue came from the history of the artists and the school in Barbizon. “I wanted to know why this tiny little area produced so many amazing images, and how Barbizon influenced the transition from French Romanticism to the beginning of French Impressionism,” said Mielke. “My trip to Barbizon revealed that the connection between man and nature is what led to Impressionism.” Mielke also learned about the Barbizon school, where French Realism landscapes were created.

“My travels to Barbizon also taught me new techniques in my own printing styles,” said Mielke. “After studying and recreating many prints, I made some of my own ‘Barbizon prints’.”

Undergraduate research trips like this one also provide students with opportunities that they might not have gotten otherwise.

“This trip was my first time leaving the country,” said Mielke. “It was amazing experiencing the French culture and having the opportunity to go to so many French art museums and try French foods.”

“The best parts of the trip for me were the things that weren’t planned. Whether it was exploring small lunch places and finding the most interesting everyday people or getting lost in the Fontainebleau forest on our way to the Barbizon school, every part of the trip was amazing,” said Alderton. “This trip impacted my knowledge as an artist as well as helping me become a more well-rounded person.”

“One of the best parts of my trip was walking down the street where all the Barbizon artists lived. There were tiny stone streets, and tall stone fences with amazing mosaics of images Barbizon artists had created,” said Mielke. “The prints themselves are very detailed, so it was impressive to see it done in glass.”

Experiences such as this one would not be possible without the support of UWL and the URC department. The URC helps fund many study abroad trips making them financially available for students at UWL.

“The trip would not have happened without the support of the University,” said Alderton. He elaborated that the University provided prints for him to study and learn from initially, provided a teacher who pushes him to be better every day, provided amazing classmates who have the same inspiration and will to learn as him, and provided the funds for him to travel and further his education.

The art show will showcase the work inspired by their trip to France on April 26th, 2019, from 4:00 PM to 6:00PM, in the third-floor gallery of the Center for the Fine Arts. Other viewings of the show are available by appointment.