A lack of pay: UWL Vanguards work on a volunteer status during the academic year 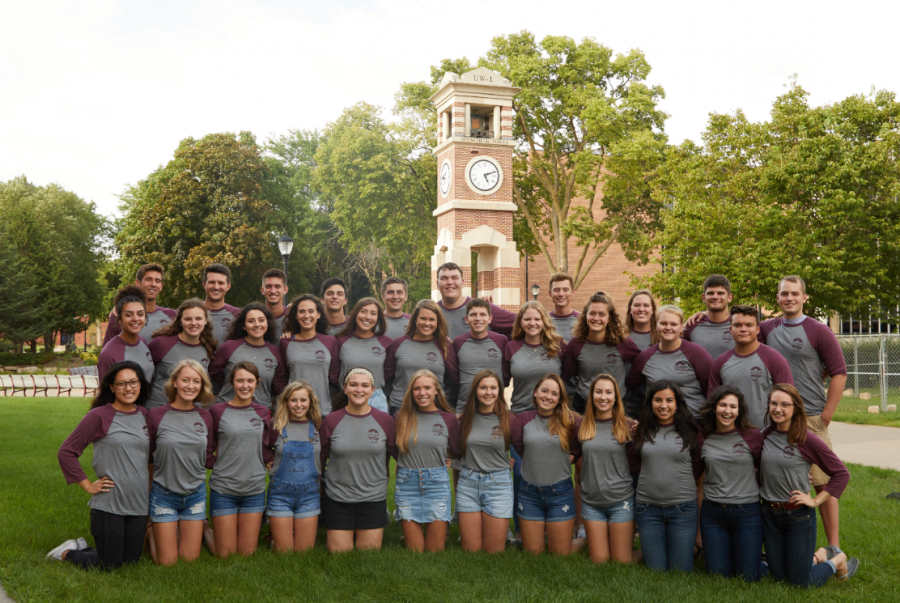 The University of Wisconsin-La Crosse website defines a Vanguard as “A UWL student that represents the UWL student body during campus tours, Campus Close-Up programs, college fairs, high school visits, and assists the Admissions Office in recruiting high quality students to the University of Wisconsin-La Crosse.” Most UWL students can recall their first tour of UWL or walking by a tour on campus and there’s no doubt that Vanguards are an extremely visible representation of UWL. Although Vanguards are paid during the summer, during the school year the pay is exempt and it is only a volunteer position.

Being a Vanguard is a big responsibility. According to their website, Vanguards are expected to be scheduled for a least one tour or special event a week, complete at least 14 tours a semester, attend Campus Close-Ups, and attend training sessions, which include shadowing and being shadowed by a veteran Vanguard. Vanguards are also expected to act professionally, socialize with prospective students, adjust tours to fit the needs of the group, give tours regardless of bad weather, and know a lot of information about UWL. Finally, Vanguards must have a grade point average above 2.50 and be at least at sophomore standing.

“During the academic year, the Vanguard Organization is a volunteer position,” said Sam Pierce Assistant Director of Admissions at UWL. “In the summer, we recognize that students use that time to make money to pay for school and we are able to offer a part time summer job opportunity for students who give campus tours.”

Summer Vanguards are getting paid for doing the same job that is a volunteer position during the school year. “The summer and school year tours are mostly the same, but with way less college students on campus,” said Vigre. “The expectations [of the position] are also the same.”

However, this doesn’t change the way Vigre views her position in the Vanguard organization. “I don’t mind that we don’t get paid during the school year. It is such a fun organization that gives back in many other aspects, especially socially,” said Vigre. “Getting paid during the summer does not change my view [of the position], however it is nice to get paid too.”

“The Vanguard Organization has been a volunteer organization since it was founded in 1976. As the Vanguard Advisor, I have worked with the organization for the past two years. In that time, we have seen over sixty applications each year for roughly twenty spots, so I believe that we continue to see interest from our current student body,” said Pierce.

“Before the selection process, the Vanguard Organization holds a few information sessions that explains details about the organization and that it is a volunteer position,” said Pierce. “Some students continue through the process by applying for the organization and some do not apply. Additionally, we advertise to students during the part time job fair and on Handshake about the summer Vanguard position if students don’t want to apply for the academic year position.”

“I give tours during the summer if I am here,” said Vigre. “It’s fun to meet all the prospective students who are trying to decide which school to go to, or who just wants one more ‘yep, this is where I feel at home’ moment.”

Although there are good parts of the Vanguard experience, not every member feels this way. An anonymous student commented on their time with the Vanguard organization. They asked to remain unnamed, they will be referred to as *Brian.

Brian believes that the Vanguards not being paid during the school year is related to student exploitation. Brian said, “I think it is definitely an exploitation of the students. Expecting them to walk around with a group of parents who question why you know what you know or ask niche questions that even the people who work in their specific department that they are asking about might not know proves this.”

Because of the erasure of pay during the academic year Brian notes that this makes the quality of tours go down because there is a lack of accountability. Brian said, “You get the quality you pay for. These students don’t feel any accountability because what is the repercussion of losing this job. Why should they have to talk about anything if they are not being paid for.

“The motto is always ‘We are not being paid for this so we must really want to do this,’ however, if students were being paid then wouldn’t that demonstrate the respect the University has for student workers? To me this is just another example of the University refusing to pay students for the hard work they put to make this institution look good,” said Brian.

Brian does explain that the part they enjoyed the most is impacting future students. By being a Vanguard they play a role in the student experience. Brian said, “I think what went well was the fact that you do have the ability to directly impact a students experience on this campus and when it is done well it drastically changes a students experience. It feels good to do something beneficial for someone else.”

For more information regarding the Vanguards, the application process, and requirements of being a Vanguard, please visit their website.

*This UWL student’s name was changed due to them wishing to remain anonymous.

Show Global Grounds cashier this article for a FREE bagel with the purchase of a regular-priced drink! Limit one coupon per customer.