Women on the wall empowers female students to climb 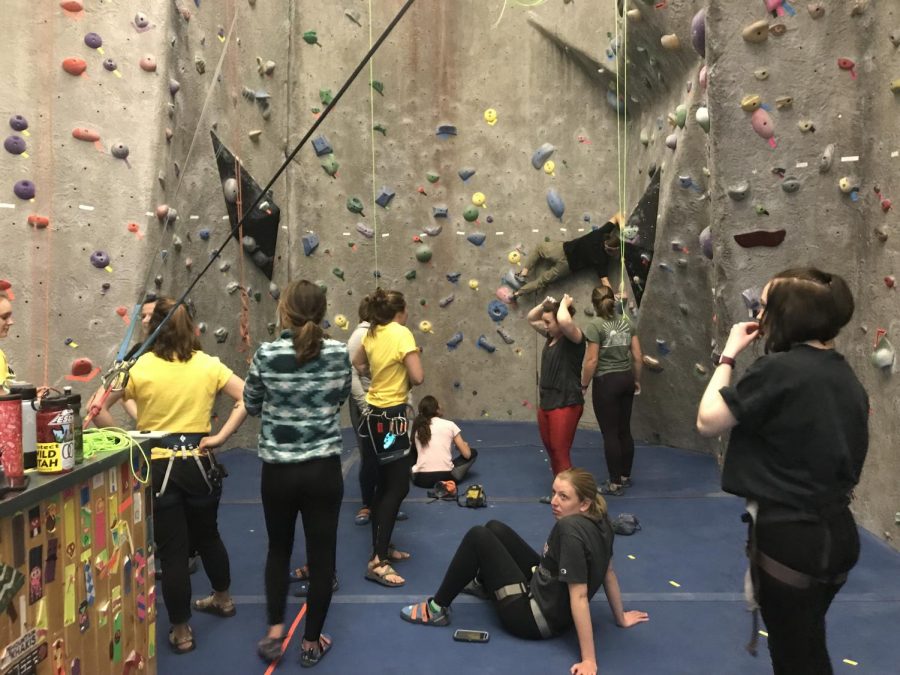 Women on the Wall climbers. Photo by Kayleigh Marshall.

On Saturday, April 27, women climbers at the University of Wisconsin-La Crosse gathered together for the first W.O.W (Women on the Wall) event. The event was marketed as a day of empowerment. The event’s Facebook page said, “A day of empowerment and support for any woman wanting to take up space in outdoor recreation. A fun day filled with recreation, discussion and of course…climbing to help build a stronger female outdoor recreation community at UWL.”

“The energy on the wall right now is just so positive and helpful and everyone’s rooting for each other, whereas on a normal day, I find myself not even wanting to come into the wall sometimes because the negative eyes and the judgment and doubt that is perpetrated through that space is just so off-putting and makes you not want to be there,” said Stephanie Zukowski a UWL student who works at Outdoor Connection and is also a part of the Inclusion Committee at the Recreational Eagle Center and one of the organizers of the event. “But now, so many people are trying things they wouldn’t try before, they’re climbing in the cave, they’re doing things they normally wouldn’t do…and I think that’s due to the positive environment of having all of these women here, cheering for each other.”

Climbing, and outdoor recreation in general, has been a community in which women feel unwelcome and unsupported. “It’s not just in rock climbing, it’s like the whole outdoor community across the world, it’s not just a tiny problem in our one climbing wall, typically, the sport is male-dominated,” said Emily Lesniak, UWL student and an organizer of the event. “Not only is it male-dominated, but it also tends to be a thing where women often get talked down upon or make it seem that their hard work or their accomplishments aren’t as worthy or important as a man’s. And it’s so engrained in the climbing community that some people don’t even realize they’re doing it or that it’s happening.”

“We wanted to do an event like this to bring a bunch of women together who were feeling the same way and let them know that they’re not alone, it’s a big thing that happens,” said Lesniak.

“The climbing community is a microcosm of our country and our nation as a whole, and there are certain identities that are significantly less supported than others,” said Emma Fischer a UWL student and one of the organizers of the event.

The event started at 10 a.m. and ended at 8 p.m. Throughout the day there were climbing demonstrations, free climbing, discussions on inclusions, the grading system, and outdoor climbing.

The creators of the event were inspired by the Flash Foxy Women’s Climbing Festival, a national climbing festival. Their website reads, “This awesome event will bring together and celebrate our growing community of badass women climbers!”

Lesniak hopes that building a community of women climbers who have more confidence, they can make the wall a more inclusive environment. “People are opening up about lots of things that maybe they wouldn’t have felt comfortable opening up about before,” she said. “The wall is primarily used by men. [If there are a lot of women in it], they’re in the corner. It’s a very intimidating place.”

Those attending noticed a shift in the environment of the wall during the event. “It’s super welcoming, there’s no put-down language, where someone’s putting someone else’s abilities or skill level down, whether it’s intentional or unintentional,” said Jade Wahlgren a UWL student who attended the event. “I think in general females have different things that they struggle with and being an all-female group, we understand what the other people are going through and what they struggle with, so we’re working on encouraging people in those areas that we share common struggles with.”

“I cannot tell you how stoked I am at the environment that we have created today,” said Fischer. “It has just been so wonderful to see a group of women come in and unapologetically try hard and explore climbing and share their experiences, and have seen them just come together in support of one another.”