The Racquet Press • May 2, 2019 • http://theracquet.org/6323/news/senate-meets-to-discuss-the-eagle-dome-and-veterans-memorial-pool/ 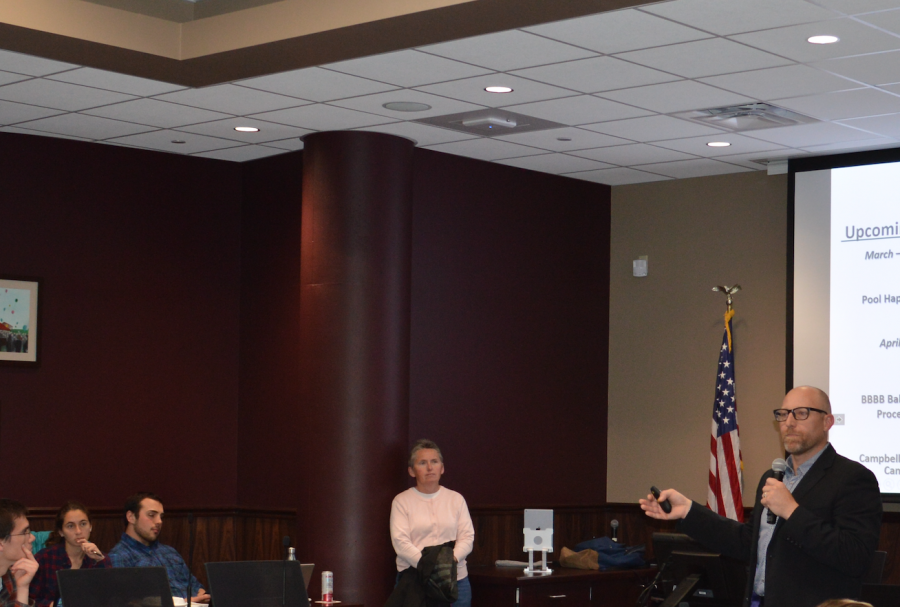 The Student Senate met and passed several resolutions that were discussed in prior meetings, as well as debated a new resolution on the Eagle Dome. During officer reports, Student Senate Sustainability Director Wolfe discussed the hands–on gardening classes to be held Thursday May 2 at 4 p.m. There was a discussion during adviser reports regarding closing the Student Union each day at 11:30pm rather than midnight due to low usage during the final hour, as well as suggestions about where new print stations may be located around campus.

The Senate again discussed and voted on the Resolution opposing Senate Bill 150 and Assembly Bill 160 requiring UW System schools to charge part-time students segregated fees on a per credit basis. President O’Connell explained the resolution was once again considered due to a conversation he had that seemed to confirm that UW System may not be involved in exploring alternatives.  “They did not give me a direct answer involving UW System at all,” he noted. “I think that it’s just important that we pass this tonight and have it on record as a stance that we have.”

Under new business, the Senate then considered a Resolution Endorsing the Eagle Dome, authored by Vice President  Jurecki. Sen. Kallis clarified the content of the resolution. “We are addressing not the validity of the results” she said, “we are currently discussing whether or not we endorse the dome.”

Several senators worried that their constituents had concerns with the dome or were simply opposed. “Most of the people I talked to in Angell Hall, and outside Angell, they don’t want this,” Sen. Micech said.

Sen. Woodmansee said that the money going to the dome would not be available for funding general academic programs and suggested the Senate should be careful before ignoring the non-binding referendum that narrowly approved the dome in the past spring elections. “We should not just say I heard this, therefore the 1800 people that voted, their votes don’t matter.”

Jacob Sciammas who is a local neighborhood leader was the guest speaker for the evening.

He updated the Senate on the veterans memorial pool campaign. “What’s amazing about a public pool? It’s for everyone,” he said.

He also provided information on fundraising for the current $500,000 gap in existing funding, which represents 37% of the remaining dollars needed, as well as discussing the ongoing construction of the facility.

The pool is planned to have numerous access points and will accommodate everyone from youths to lap swimmers. “We haven’t had a project like this in the city, [and] we’re really trying something new,” Sciammas said.