The Racquet Press • May 3, 2019 • http://theracquet.org/6337/news/communication-studies-department-student-gabby-aguilar-receives-john-e-magerus-award-for-outstanding-graduating-senior/ 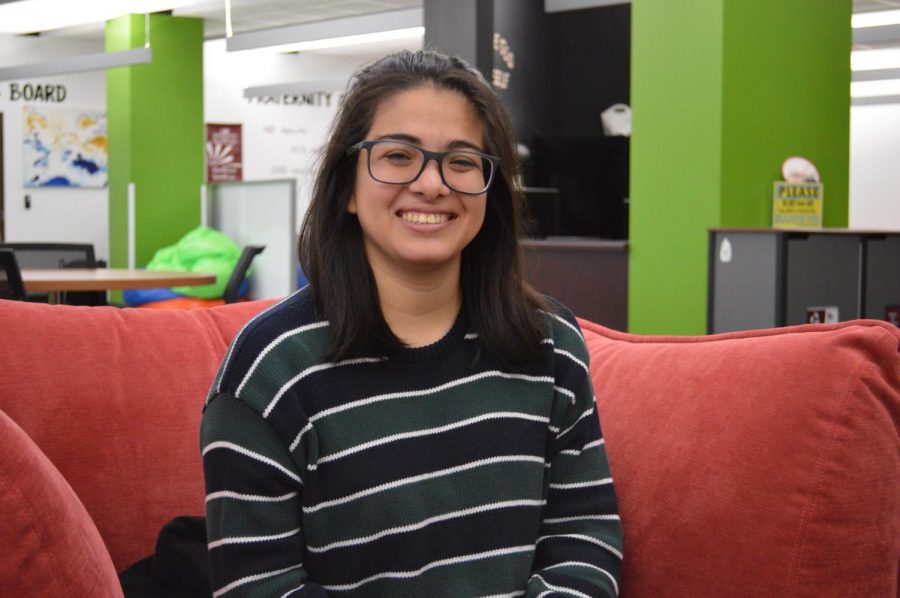 Gabby Aguilar, the recipient of the John E. Magerus Award for the Outstanding Graduating Senior. Photo by Kayleigh Marshall.

“I graduated a semester early,” said Aguilar. “I originally came to UWL because I was on the gymnastics team and was recruited. I am from Texas and every time I say that, people ask me, ‘So why are you at UWL?’, and it was always just because of gymnastics but I fell in love with UWL, and I especially fell in love with the communications department. They did a lot for me and I would not be where I am without being a communications major.”

Aguilar grew up in Austin, Texas, and saw it as a much more diverse area than La Crosse, “It definitely did feel different, especially being from Texas, and being from a community that is more naturally diverse, as a senior in high school, I didn’t think Wisconsin was going to lack much diversity and I just thought it was going to be a different experience. But my parents thought that, and they said they weren’t going to tell me because they didn’t want to influence my decision in any way,” said Aguilar.

“But I do feel that it was an experience that maybe I did need to go through, it definitely helped me grow as a person and communication studies brings those conversations into the classroom, and the curriculum here is very aware of how the campus is, but I definitely would go back and be involved in more student organizations if I could,” said Aguilar.

After earning her degree, Aguilar moved to Los Angeles to pursue her dream of working in television and entertainment. “I felt confident in moving to L.A because the communications department is amazing and I was able to talk to professors who went to USC or lived in California and talk about their experiences,” said Aguilar. “My major gave me a really strong baseline in doing a bunch of different things, and I felt like the doors were open.”

Aguilar had a semester gap before she begins graduate school at the University of Southern California. She is using that time to gain experience in her field. “Currently I’m a Communications Associate at NALIP, which is the National Association of Latino Independent Producers. We basically focus on advancing Latinx voices and diverse voices in media and entertainment, so we have this big media summit at the end of every summer, and this year it’s our twentieth anniversary, so it’s a big one, said Aguilar.

“I currently am running the communication department, which basically entails a lot of social media stuff, and then helping plan the summit, so we help with the programming department a lot, and help find panels and finding panelists who are relevant, and invite them,  and write the programming. Basically anything that is communication and spoken at the summit, our team has to write.”

For students considering graduate school, Aguilar recommends visiting a few different schools and asking a lot of questions. “It’s important to know what each school would offer compared to a different school,” said Aguilar.

After school, Aguilar wants to explore the television field. “What I want to do in television kind of changes every day. I still haven’t really solidified exactly what I want to do. Right now I’m thinking like, a head of development for a major television network,” said Aguilar.

“I’d really like to be some type of executive because the content that we’re getting comes from the top, and most of the people at the top are white, straight men. So, I feel like it’s really important to have that voice up there, as an executive, and possibly helping get those projects passed that are telling more diverse stories,” said Aguilar.

Aguilar expressed her generosity for UWL and the impact that the communications department and gymnastics team had on her. “Thank you to UWL, and specifically the communication department and the gymnastics team,” said Aguilar. “UWL is an amazing place, and maybe when you walk through the door you think it’s just another school, but I honestly really cherish my time at UWL because it is a smaller community and I think each student is able to get what they want out of it. These opportunities are here, you just have to look for them.”