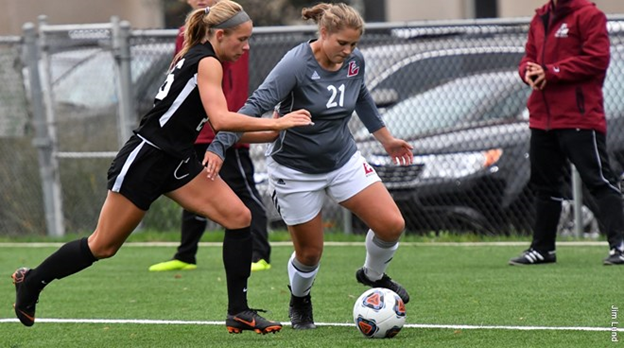 The United States Women’s National Soccer Team (USWNT) won their fourth World Cup on July 7 by a score of 2-0. The two goal scorers for the United States were University of Wisconsin-Madison alum Rose Lavelle and team captain Megan Rapinoe. Rapinoe was awarded the Golden Ball after defeating the Netherlands, which is the award presented to the best player in the FIFA World Cup Final.

Over 4,200 miles away from where the World Cup Final was played in Décines-Charpieu, France, The University of Wisconsin La-Crosse Women’s Soccer team was rooting on the United States National Team. Throughout the entirety of the tournament, Eagle players and coaches were at the edge of their seats, rooting for what they hoped to be a United States second consecutive FIFA World Cup Title.

“Regardless of political distractions I think it was super important for Megan Rapinoe and the U.S Women’s National Team to have such a successful World Cup in order to bring eyes back to the female soccer league,” said UWL Senior and goalie Lily Brock.

Brock added, “They were able to shine light on the fact that the women’s team has been performing so well over the past couple years and they have been inspiring young boys and young girls all throughout the country.”

UWL Women’s Soccer Head Coach Jason Murphy said that most of the players and coaching staff watched the World Cup. Murphy said, “It is the pinnacle of our sport, so it is great to watch. I personally learned a lot, not just from the USWNT, but many of the teams in the event and I look forward to trying it with our team here at UWL.”

Brock added, “The number one thing that we will likely take away from the way the U.S. team played is just their possession style of soccer and their ability to get ahead early and stay ahead.”

Like Brock and her teammates were inspired by the performance of the U.S Women’s Team in the World Cup, girls and boys in the La Crosse area are inspired by Brock and the Eagles Women’s Soccer team as well. As Coach Murphy explains, “I believe our players and program does a good job of engaging the local soccer community…I hope we inspire younger players to play the game. We work hard to connect to those players and want to continue to make an impact on their lives.”

Coach Murphy also added that there’s various soccer camps throughout the year that younger soccer players in the area can attend. The age for the campers ranges from eight-year olds to high school seniors.

Brock said, “I think the number one way the community and UWL can enhance the sport is to continue fostering the skills of young players. Also, to allow young players access to watching good players and teams play.”

One way UWL fosters the skills of younger players is through the 2019 August ID camp. The camp occurs August 10 and 11 at Veterans Memorial Stadium. High school girl soccer players will work with the UWL coaching staff and players in a camp “designed to test and enhance your skills in preparation for a potential future in college soccer,” as it says on uwlatheltics.com.

Brock added that she’s noticed the La Crosse community has given her team a lot more attention the past couple of years. More and more citizens in La Crosse and even the UWL student population have been going out to Veterans Memorial Stadium to root on the Eagles.

Both Coach Murphy and Brock stated attendance and overall attention for their games has been very impressive. “I’ve noticed an increasing number of fans throughout my collegiate career,” said Brock.

The UWL Women’s Soccer team led the Wisconsin Intercollegiate Athletic Conference in home attendance in 2018. “We look to do that again,” said Coach Murphy.

While there has been some controversy on gender disparity in sports the past few years, both Coach Murphy and Brock said that on UWL’s campus, men’s sports do not overshadow women’s sports. Brock said, “Personally I think we have had a lot of success in both female and male sports here at UWL. I don’t think that our female sports get overlooked.”

The Eagles have had a massive amount of success in women’s sports recently. Asides from the soccer team, who finished 18-3-3 last season, other teams have succeeded as well. The Eagles women’s basketball team went 22-5 and made it to their conference semi-final game. UWL’s women’s cross-country team placed 9th at the NCAA Tournament last fall. UWL’s tennis, gymnastics and track and field team all had a tremendous amount of success this past season as well.

“I would say the number one reason to come out and support UWL soccer this fall would be because we will play really good soccer and it will be really fun to watch,” said Brock.

After last year’s success and exciting matches, there’s nothing Coach Murphy could say but that the community won’t want to miss what the Eagles have in store for this upcoming season.

“The UWL community and La Crosse community should come support UWL soccer because we play an attacking style of soccer – we have scored 137 goals in the last two seasons – and we are coming off two deep NCAA tournament runs. One Sweet Sixteen in 2018 and an Elite Eight in 2017. We finished 2018 ranked number seventeen in the country and look to build off that this fall. See you in September!”