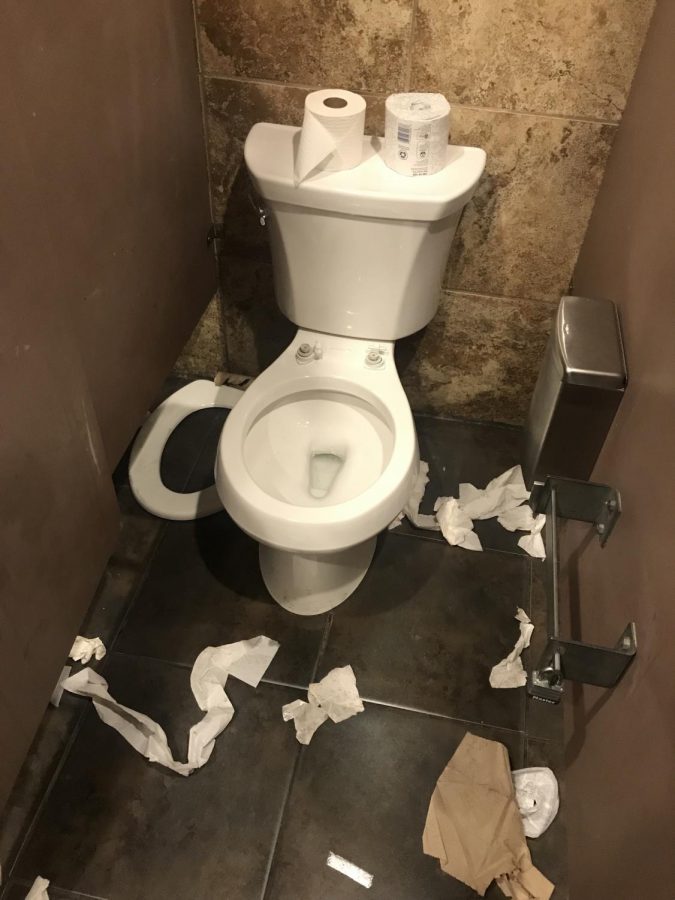 This fall semester some students in La Crosse took part in the senior pub crawl downtown. Bar owners of La Crosse experienced increased damage to private property, something they say needs to end if students wish to inquire about their business for next year’s event.

Brothers Bar saw damage to bathroom utilities and property during the day and evening of the pub crawl. Paper towel dispensers and toilet seats were torn off from their bolts in the women’s bathrooms, as well as a motion-sense faucet from a sink in the men’s bathroom, which damaged some of its plumbing. General manager of Brothers, Cade Michael said, “It sucks that there is a handful of people out there that ruin it for everybody else because not everybody is here to destroy things.”

Michael has been with the bar for six years and an employee in the downtown area for nine. He said that large events are accompanied by these issues more often than not. Summer provided many issues for the establishment as well, explaining how the months prior to the start of the school year felt as if the bar was being “targeted.”

Small things were consistently stolen from the bar, such as the chains from their toilets which allow water to enter its bowl from the tank. A piece of property Michael says was stolen every Thursday, Friday, and Saturday for a month straight. While these chains tend to be relatively cheap and easy to repair, other instances where people ripped out handfuls of mechanical parts from toilet tanks, and even shattering their toilets by use of its own tank cover have proven to be very expensive drunken acts.

Brothers does not employ a bathroom attendant, which is compensated by implementing bathroom checks every 20 minutes by bouncers or bartenders. This process, however, has never been successful in catching someone in the act.

Attendees in the past who have been caught trying to steal the vibrant signs that cover the bar or destroying property have their information recorded by law enforcement and are obligated to pay damages or risk having charges pressed against them.

The large central police station sign that hangs over the DJ booth to the back left of the bar has been broken twice, a situation in which police were called both times in order to record the vandals’ personal information.

Larger festivals with more out-of-town crowds such as Oktoberfest is handled by adding more staff to the bar floor. With no definitive budget for damages, Michael says the issues like the damages from the pub-crawl tend to “add up,” making it very difficult for the popular bar and college-crowd favorite to implore the extra help needed for other, more important weekends.

Polito’s Pizza also saw some damage to not only their bathrooms, but property that manager Jeff Zarecki said had nothing to do with the restaurant. Polito’s had a toilet cracked open, which spewed water out into the hallway. Zarecki was forced to turn off his water and operate from 7:30 p.m. until 3 a.m. and into Sunday without one of his toilets.

A door to a workshop belonging to the owner of the building was kicked open, damaging it beyond repair, which had cans of spray paint stolen. Zarecki said that someone entered through the emergency exit and kicked the warehouse door, which according to him is “very unusual.”

The toilet wasn’t replaced until the following Monday morning, along with a new door. “It was all kind of a headache,” said Zarecki, “maneuvering around these issues all while keeping busy focusing on food preparation.”

Zarecki described the frustration of having to function around the damaged property: “That’s the unfortunate thing, it usually doesn’t happen here too often.”

Zarecki, after all the damage, still supports a bustling nightlife full of college students, as long as they benefit his business respectfully. He emphasized how much fun it is to work bar times, “but honestly I wish they didn’t feel the need to destroy our downtown.”

If Zarecki could deliver one message to students who enjoy La Crosse’s nightlife, it would be “respect it while you’re here.” He made sure to express how college students in this area are here four-to-five years max and their representation during that time as college students’ matters to the people who call this area home. “When you guys come in at bar time, we want to have a relationship with you, we don’t want to have to think ‘oh no here comes a college kid,’” said Zarecki.

One bar owner had to call their contribution to the bar crawl quits earlier than expected. Robbi Wolf, who’s owned and operated Christos Taverna for two years now, recalls having to kick bar-crawl attendees out at 8 p.m.

“As it got later, a lot of the pub crawl was in here. They were sitting on my glass tables like they were at home,” said Wolf. Wolf recalled having to physically push a pub crawler’s feet off a fragile $300 table. She also dealt with what seems to have been a trend for the bar-crawl: a urine covered men’s bathroom and a broken soap dispenser was thrown into the toilet.

The decorations in the Taverna’s bathrooms survived, but were out of place, having been taken down and left on the ground. “It was 7:45 p.m. when this happened and I just turned on all the lights, paused the music, and said, ‘everyone in the pub-crawl has to go,’” said Wolf.

The tavern operates more like a wine bar, while also offering specialty drinks and beers of all kinds. “It’s been two years of operating for a more mature crowd, and I’ve never experienced any property damage until now,” said Wolf.

For Wolf, her contribution to the pub crawl was more of a personal decision rather than a business one: “I went to college, I was a poor college student. The reason why I joined the pub-crawl is because I understand not having money in college. I was there, but we never disrespected any establishments we went into.”

Most of the decorations and furniture you see around Christos Tavern comes out of Wolf’s pocket, explaining how she operates on a deducible of $1000. “This is my house, this is how I pay my mortgage, this is how I pay everything. For students to come in here and act like they couldn’t care less is extremely disrespectful,” Wolf said.

The way she’d describe her first experience participating in the pub-crawl: “very disappointing.” She will not participate in next year’s event. As a small business owner, Wolf feels it is very difficult to support another pub-crawl if this attitude continues. Wolf made sure to clarify that these problems were not caused by all pub-crawlers, “but it was some of them; and I can’t afford to have even one person breaking a toilet.”

In a Facebook post, Joe Zenz, a longtime member of the pool and dart bar Top Shots, talked about the damage the senior pub crawl brought to the business:

“Tonight was the UWL senior class pub crawl…..by 6pm someone had ripped the men’s room door off the hinges and broken the pipes to the urinal, clearly done on purpose. Pool cues broken, tables with pitchers of beer spilt, etc. It’s so sad how disrespectful people have gotten. I’ve been at Top Shots for 17+ years and seen some stupid shit, but I’ve never seen such a blatant disrespect as I have over the last 2 years. Not to sound too old, but I really hope this next generation can get their shit together. It’s just sad.”

The comments were met with both sympathies for the long–time business and some backlash from university students who caught wind of the post, calling it unfair to pair a few unruly partiers to the rest of the student body or an entire generation.

Throughout the years, La Crosse has had alcohol-related activities, which in return is a stipend on the La Crosse county taxpayers. According to a representative group from La Crosse County, yearly damages to property, hospital visits, and law enforcement cost taxpayers $915 per person, amounting to $105 million in total.

The report, known as the “Burden of Risky Alcohol Use in La Crosse County” updated its findings in Sept. 2017. It comes from the group “Changing the Culture of Risky Drinking Behavior Coalition,” which seeks to identify and prevent what factors cause substance abuse, studying a range of subjects from middle schoolers to adults.

The report’s findings on area college students stated that 68 percent attested to drinking within the month of Sept. 2017. A concern the report brought forth suggested a “less than healthy” culture on La Crosse area college campuses, a trend the coalition is attempting to combat through “further education efforts, youth and college student engagement in marketing and leadership training, and a recognition program for area taverns engaged in safe practices.”

The National College Health Assessment (NCHA) survey is a national survey done periodically by the three higher-learning institutions in La Crosse (Viterbo University, Western Technical College, and University of Wisconsin-La Crosse). The survey asks college students around the country questions pertaining to personal alcohol and drug use, their sexual, mental and physical health, personal safety, exercise, and nutritional habits while living on or near a college campus.

In 2014, the survey concluded out of 1,833 responses, 35 percent of college students in La Crosse county participated in binge drinking in the last 14 days, compared to the national benchmark of 36.2 percent.