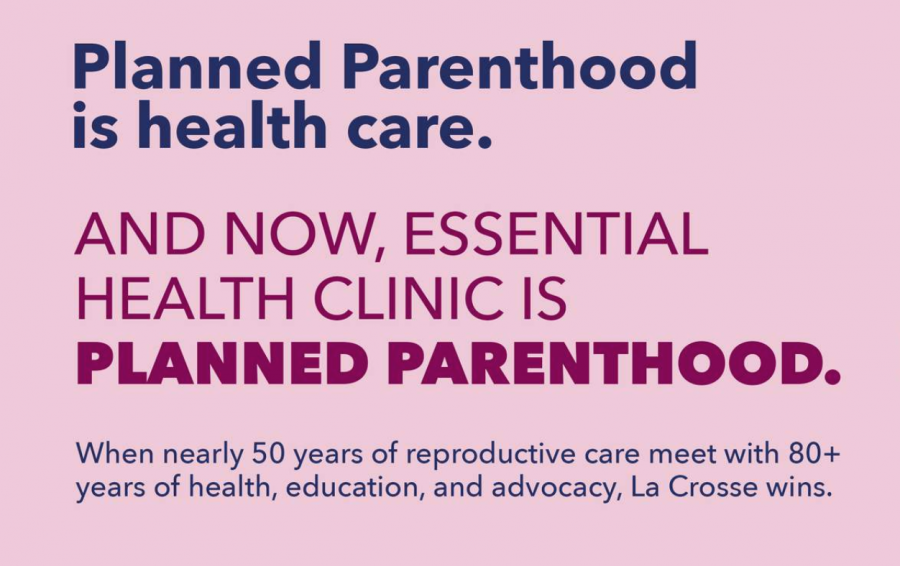 A fixture in La Crosse’s community for almost two decades, Essential Health Clinic is undergoing a rebranding process to align itself with a larger American Organization; Planned Parenthood.

Title X, formally known as Public Law 91-572, or “Population Research and Voluntary Family Planning Programs,” was a policy formed by President Richard Nixon in 1970 as part of the Public Health Service act. It is the only federal grant program dedicated to providing individuals with comprehensive sexual health education and services. It is designed to cater to those who, due to lack of healthcare or availability, would not otherwise receive such treatment. Under the Trump-Pence administration, it has been contracted to include a ban on healthcare officials providing abortion counseling. Planned Parenthood decided to withdrawal from Title X funding this past year, to avoid the legalities of Trump’s “gag-rule,” allowing them to continue providing safe and credible information on many of their health practices.

“We did not get Title X funding this year,” continued Beranek. “So, in our plans to figure out how to make a non-profit clinic sustainable, we decided that joining together would just make both of us stronger. So now we are the western side of the state’s Planned Parenthood presence.”

The now Planned Parenthood office provides an array of services for those in need. This includes preventative care options, such as wellness checks in relation to birth control methods, sexually transmitted diseases and infections screenings, birth control services (and education and counseling on which option is best for individuals), STD/STI treatments, pregnancy testing and counseling, and emergency contraception. The business will continue to provide these services under their new identity, while also adding on some others.

“There will be some new services for patients, including being able to run some new, additional tests. We’ll be able to birth control by mail, which is a big bonus for our patients. So if they have an appointment here we can send it in the mail automatically when they will need it. And then some added services like the HPV vaccine, which we weren’t able to do previously, and then syphilis testing and miscarriage management will also be coming eventually. Things that we weren’t able to do before due to financial constraints,” said Beranek.

After the official press release of the merger, Beranek said she saw a community response. “It’s been mostly positive feedback, I haven’t encountered anything too negative… except for the commenters sometimes.” When asked to elaborate, Beranek explained that the clinic does put out the occasional article on their site that receives negative comments. “But our neighbors in the surrounding community here on the north side have been very supportive of the transition. Old Towne Strings (a local music shop) and Gold Heart Tattoo (a local tattoo parlor) both wrote Facebook posts supporting our patients and the people who work here. So that’s been fantastic. We’ve also had a few people just pop their heads in to say ‘Hey this is great’, things like that, which is wonderful.”

Gold Heart Tattoo, which is located at the opposite end of the block from the clinic, released a Facebook post on Aug. 20, showing their support, and also offering up their time to help those who feel uneasy walking into the clinic alone, in response to rumors about protests.  Missy Hoch, one of the artists at the shop, explained that it the mutual idea of her and coworker to idea to write and co-author the post that is displayed below.

“Knowing that it was transitioning to Planned Parenthood, I mean there were a few people protesting, we heard about protesting, and we wanted people to know that they had an ally on the street, you know?,” said Hoch whilst tattooing a customer. “We wanted them to come to a safe spot and be able to walk in and be supported.”

Amidst press releases and the normalcy of clinic responsibilities, Essential Health Clinic of La Crosse has undergone the process of merging with the larger Planned Parenthood cooperation and maintaining their efforts towards their original mission statement: help to create healthier lives and families by providing and advocating for sexual health and education. For any further information on the services provided, both new and remaining, visit the La Crosse location’s website.