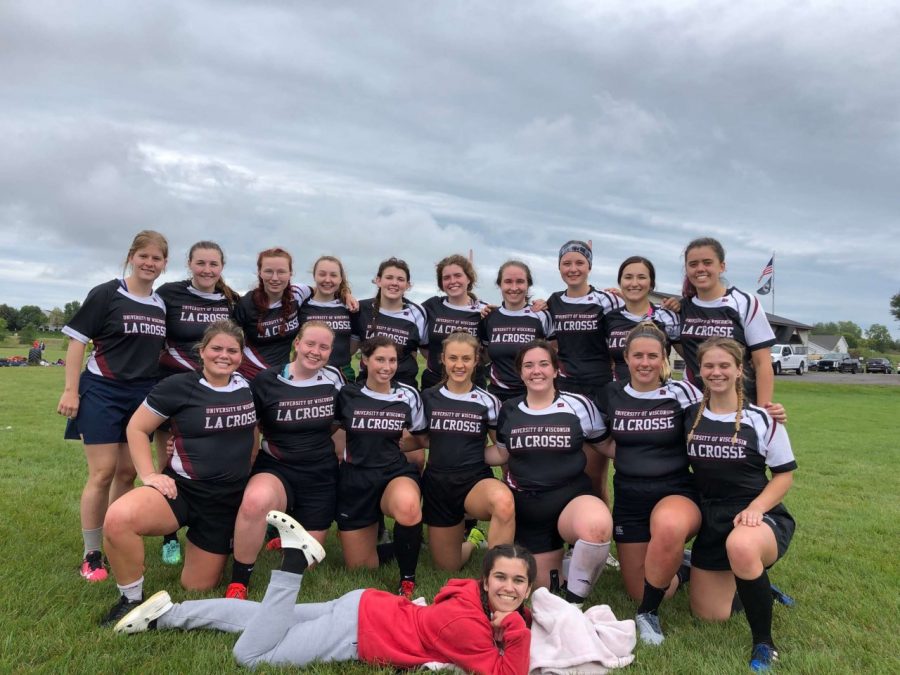 The University of Wisconsin-La Crosse’s Women’s Rugby Club Team has presented opportunities for members to be active, travel and meet new people for over 20 years. The team was founded in 1978 and remained until 1981 then made a comeback for good in 1994, gaining numbers every year.

The club runs from early September to November, having practice only two nights a week, Tuesdays and Thursdays, from 5:30 p.m. to 7:30 p.m. “I wouldn’t say our schedule is busy. We play most Saturdays from the beginning of September until the beginning of November, and we usually play two or three tournaments in the spring,” said UWL junior and three-year rugby player at Emma Malloy. The regular season for the team includes some games that are played here at UWL.

“Our team is part of the Great Waters Women’s Rugby Conference, so in the fall during our competitive season, we play all of Division II and III college teams of Wisconsin, Northern Michigan, and Northern Illinois,” said Malloy, “Our team plays our home games at the fields on north campus.”

Although the team’s schedule includes many games played at UWL, it offers chances to travel to many different places. “We play games all over the Midwest and try to travel to Canada every year,” said Malloy, “Every other spring, we also try to go abroad. Last spring break the team went to Amsterdam.”

There are no prerequisites to join the team and no tryouts are involved. Whether you have played rugby your whole life, or have never even heard of it, the club team is open to everyone. This club is built for athletes at any skill level, encouraging anyone to give it a try. “This is a club for both beginners and advanced players,” said Malloy. “We generally have about 20-25 girls. Which sounds like a lot, but with 15 girls on the field at a time, it means everyone gets tons of playing time.”

Each game of rugby has two 40-minute halves, with a ten-minute break in between, which can seem intimidating to some due to the time span. “I never thought I could run a full 80-minute game, but I eventually was able to do so. That may sound daunting, but rugby is a sport for any physical and ability level,” said Malloy.

The Women’s Rugby Club gives members a chance to travel to new places and opens doors many students don’t get opportunities to have. “If someone is on the fence about joining, I recommend just giving one practice a try,” said Malloy. “I would almost guarantee they fall in love with the sport just like I did.”