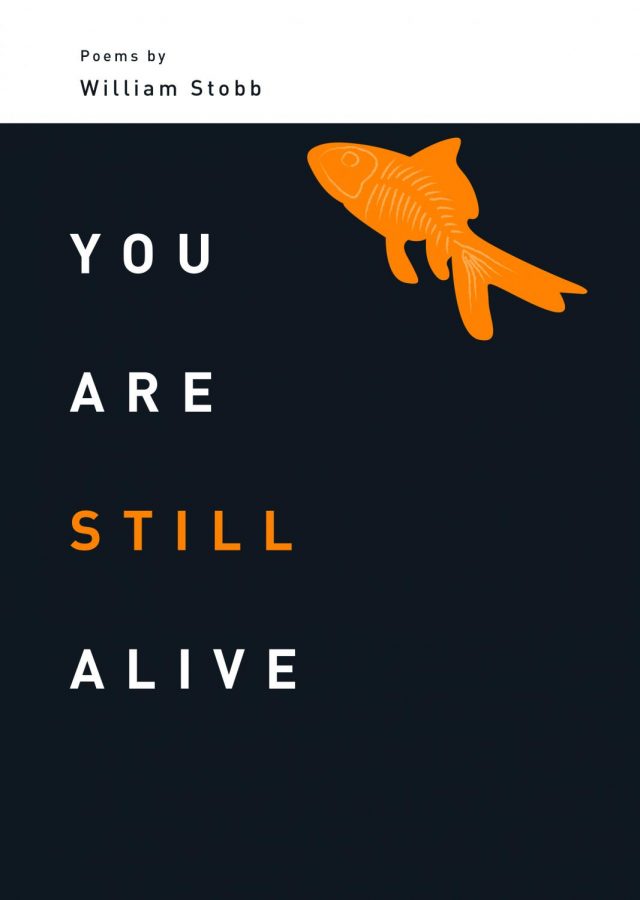 Cover of You Are Still Alive by William Stobb

William Stobb, a Creative Writing professor at the University of Wisconsin-La Crosse, released his latest book of poetry, You Are Still Alive, in Oct. 2019. Stobb’s poetry has previously been published in journals such as American Poem Review, Colorado Review, Conduit, Denver Quarterly, DIAGRAM, Interim, Jacket, Kenyon Review, MiPOesias and other journals and zines.

The process for You Are Still Alive began while touring his dissonant Absentia, a book of poems published by Penguin Random House which was a National Poetry Series selection. “I had a version of the manuscript ready by 2016, but my editor just kind of sat on it, I could never get an answer out of them,” said Stobb. He said Penguin Random House refused to place him as a priority, which caused him to explore other publishing options.

“I thought eventually that this book was going to be published, because it doesn’t suck; but there does come a certain time when you’d think ‘maybe this book does suck,” said Stobb.

However, David Dodd Lee, Editor-in-Chief of 42 Miles Press, a division out of India University’s English Department decided to publish You Are Still Alive.

“As an editor,” said Stobb, who is an assistant editor of Conduit, “I was familiar with Lee’s work, and he made himself available to talk with me about my poems without being bossy or negative. I never had that at Penguin, seeing the writer’s perspective was really cool to have,” said Stobb. “A good reader or scholar can be a good editor, as the ones at Penguin have proven, but we just didn’t have the kind of relationship that I have now with Lee.”

You Are Still Alive was awarded the 2018 42 Mile Press poetry award and has been met with positive reviews. “I’m really happy with it. I’ve done four or five events, and everyone seems to like it; it’s sold well at readings,” said Stobb.

Stobb says his love for poetry writing comes from his ability to elevate meaning beyond simple letters on a page and has previously published five poetry books that showcase that love for language and focus on the meaning of life. However, he says that You Are Still Alive was written with the intention to make audiences laugh.

“I love all my poems equally” said Stobb, laughing, when asked if he has a favorite out of the collection. “There are a few that I think are highlights, but even the ones that aren’t are still meaningful.”

“Any stupid idea can have the seed of a good piece,” said Stobb. “The more you are willing to explore from an artistic standpoint, the more opportunities you give yourself to write well.”

Stobb says collaboration is important to him, and he has created stage productions with La Crosse are writers and producers, as well as participated in projects with other editors and poets in the La Crosse area.

“Seeing what these specific people bring to your work is awesome,” said Stobb. Stobb has lived in the La Crosse area for 18 years and continues to discover the different creative facets the city has to offer. “There’s a lot of great writing being done about La Crosse itself. This city has its layers of life, from the active side to its unique natural setting; it’s a great city for writers,” said Stobb. Stobb’s writing is literally a part of La Crosse, as pieces of it are etched into the sidewalks of downtown La Crosse.

“When I first saw that, I was in a process with this manuscript under a different title, but seeing those words I immediately recognized how it resonates with the existential thread of this book,” said Stobb. Stobb hoped to have Sheely design the cover, but the publishing house was unwilling.  Instead, an orange-outlined goldfish swims against a black backdrop. The goldfish is transparent, and its’ bone structure is visible. Stobb believes this represents Sheely’s art, as Sheely’s works often contains skeletons.

Stobb believes the most difficult thing about teaching poetry is convincing students to eliminate their preconceptions of poetry. “Say what you have to say as directly as you can and go back and see what could be tightened or where a line break may create a dimension of possibility within your word choice,” said Stobb, “and then you’re making art within your own language; really, you’re already right there from the beginning.”