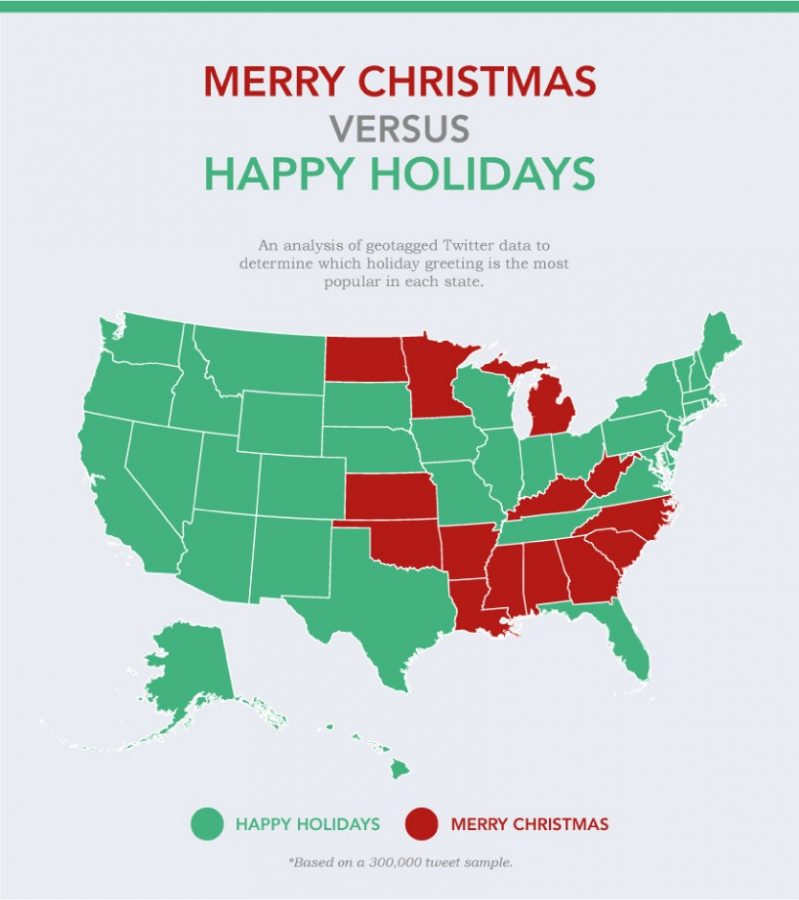 While “Merry Christmas” has been a largely common greeting during the holiday season, many have begun to transition to a new phrase, “Happy Holidays.” There are many different holidays that fall during the month of December such as: Hanukkah, Kwanzaa, New Years and Christmas. The adjustment to “Happy Holidays” has been done out of respect for those celebrating holidays besides Christmas.

The term “Happy Holidays” has become more popular in use to promote a more inclusive culture, although the transition has caused friction and added to the “War on Christmas” debate. “The idea of a “War on Christmas” has turned things like holiday greetings and decorations into potentially divisive political statements. People who believe Christmas is under attack point to inclusive phrases like “Happy Holidays” as (liberal) insults to Christianity,” according to The New York Times.

Each holiday celebrated during the month of December has its own traditions, celebrations and principles. There are over 320 million people in the U.S. that celebrate different holidays and partake in different traditions.

Hanukkah is an eight-day Jewish celebration beginning this year the evening of Dec. 22 and ending Dec. 30. The holiday celebrates the overthrow of the Syrian Greeks, as well as the rededication of the Second Temple of Jerusalem. After the overthrow of the Syrian Greeks, the Jewish citizens attempted to relight the menorah. In every home, on each night of the eight nights of Hanukkah, a new candle is lit on a menorah. It is celebrated with holiday songs, games, gift-giving and food.

A popular game played during the celebration is dreidel, which involves the spinning of a four–sided dreidel, winning and losing pennies, raisins, chocolate pieces, or whatever is chosen to be put in the “pot”. The food prepared during the holiday consists of fried food, another reminder of the lasting oil. Fried potato latkes and sufganiyot are popular items commonly seen in Jewish households during the holiday.

Kwanzaa is a holiday that is reflective of African cultures and begins on Dec. 26 and lasts until Jan. 1. The holiday is a celebration of family, community, and culture. Kwanzaa was created by Doctor Maulana Karenga in 1966, after the Watts riots in Los Angeles as an attempt to unite African American communities. Each night of the seven celebratory days, a candle is lit on the Kinara (candleholder). After the candle is lit, the family gathers to discuss one of the seven principles Kwanzaa is based around.

Each household celebrates Kwanzaa in their own way, usually involving songs, dances, storytelling, poetry reading and a large feast on the sixth day.

Typical celebrations are done beginning on New Year’s Eve and last around 15 days. The celebrations include: decorations, dinners with family, fireworks, and public ceremonies with dragon dances and imperial performances. Red is the main color for the festival because it is said to bring good luck. It can be seen on every building and decoration. The New Year’s “reunion dinner” is said to be the most important meal of the day celebrated with family. The common foods that are considered good luck and eaten during the meal include fish, dumplings, and rice cakes.

Christmas is celebrated on Dec. 25, to commemorate the birth of Jesus Christ. The holiday is celebrated by exchanging gifts, putting Christmas trees in the home, decorating with lights, caroling and hanging stockings. Modern traditions for Christmas also include, visiting and receiving gifts from Santa Claus, hanging of the Mistletoe and ringing bells.

The reasoning behind the evergreen tree was introduced by Martin Luther, explaining they were a symbol of eternal life. Candles during the holiday reason represent a picture of Christ being the light of the world. Holly is another symbol used around Christmas time, showing the thorns in Jesus’s crown. The color red is a large staple in Christmas traditions as well, representing Christ’s blood and death.