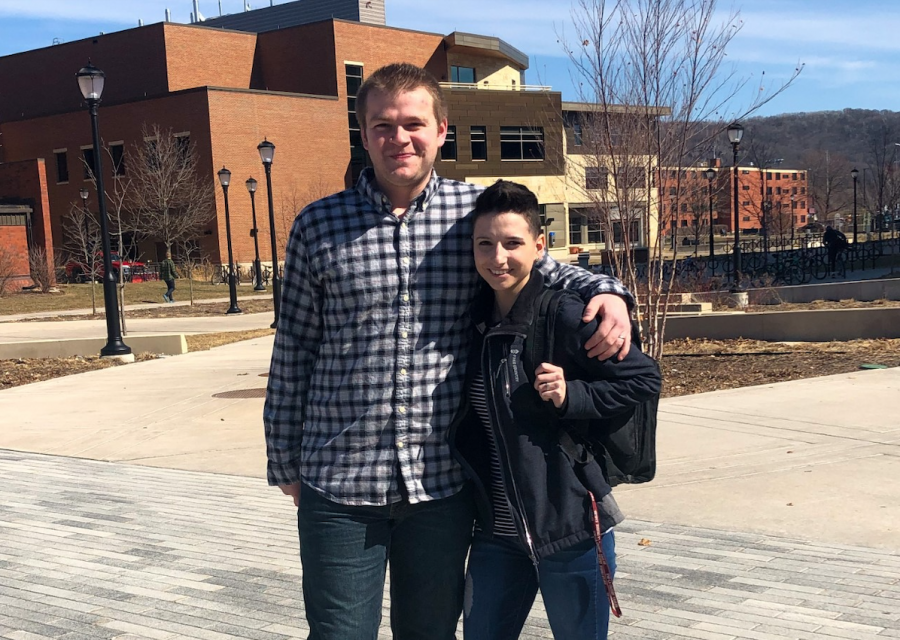 Seniors at the University of Wisconsin – La Crosse, Bridget and Benjamin Melke, have taken a non-traditional collegiate route, getting married their freshman year.

“We were engaged in October of our freshman year of college, then married that following June,” said Benjamin.

Both Bridget and Benjamin had supportive family and friends that backed their decision to marry at a young age.

“We were blessed in our situation. Yes, we had to grow up rather quickly, but we did have parents who were willing to help us from the ceremony to the party after that,” said Benjamin. “Since the wedding, we have definitely been full-grown adults doing everything ourselves but I think it was very kind of our parents to help us out.”

“We have very supportive families,” said Bridget. “My matron of honor was married at the time, most of my friends are advanced in their lives and families so they were beyond supportive.”

The couple stated although they wouldn’t change any of the choices they have made, they faced many obstacles they’ve needed to overcome throughout their years in college.

“Bridget used to say that during our first years of marriage we were more like roommates than anything else,” said Benjamin. “We used to hang out at the apartment but never had serious husband and wife conversations.”

The choice to marry while pursuing college degrees also impacted their experiences at UWL and put strain on their relationship.

“It’s difficult because, like every other student, you’ve got hours of studying on top of homework, you have to be on campus or in my case field course works, and then you’ve got jobs and there aren’t enough hours in the day,” said Benjamin. “Then we have to dedicate time to our significant other on top of that, which sometimes doesn’t happen. Sometimes we have completely opposite schedules and don’t see each other until 7 p.m. at night.”

“It’s especially difficult because you see every other college student is living on campus and mom and dad are still paying bills and we signed up for it, but we really had to grow up and become adults right out of the nest,” said Bridget.

“Also, unfortunately, we are not as involved in the UWL community as I would have liked to have been,” said Bridget. “I would’ve liked to be a part of different clubs and ever since I was younger I wanted to be in a sorority but instead, I put that on the sidelines and thought about how to better my relationship with Ben and pay bills. That all had to really come first.”

The Melke’s shared that their choice to marry in college has also had an impact on their social lives.

“[Marriage] has definitely affected our social life in the sense of, we feel like old people sometimes,” said Benjamin. “While every other college student goes downtown for thirsty Thursday or pub-crawls or whatever it may be, we are at home watching Jeopardy on Hulu.”

“We watch a lot of Jeopardy,” Bridget added.

“I mean don’t get us wrong, we are still fun, young kids but it maybe doesn’t come out that way when people see us,” said Benjamin.

While the Melke’s did choose to take a non-traditional collegiate route and have faced obstacles they’ve needed to overcome, they believe they have become stronger and are grateful for their journey.

“It is possible to be married and pay your bills and go to school full time,” said Bridget. “It is difficult, and with it, we’ve had a lot of downs, but in the end, we’ve come out much stronger than when we began.”

“This may sound a bit cheesy but I do think that, especially with our generation, people are quite hesitant to get married at such a young age. A lot of people want to wait until they are 30 and have a career, but if you know you know,” said Benjamin. “Don’t sit there and think about it and question it too much because if you know you are with the right person I think you can work it out.”

“Sure, school and your academics and your goals for your career are important but I think having somebody by your side while you’re going through it is important,” said Benjamin. “Maybe that’s some advice, if somebody is thinking about asking that person to spend the rest of their life with them, don’t think about it anymore, just do it.”