UWL Coate Hall under “shelter-in-place” order; students told not to leave their rooms 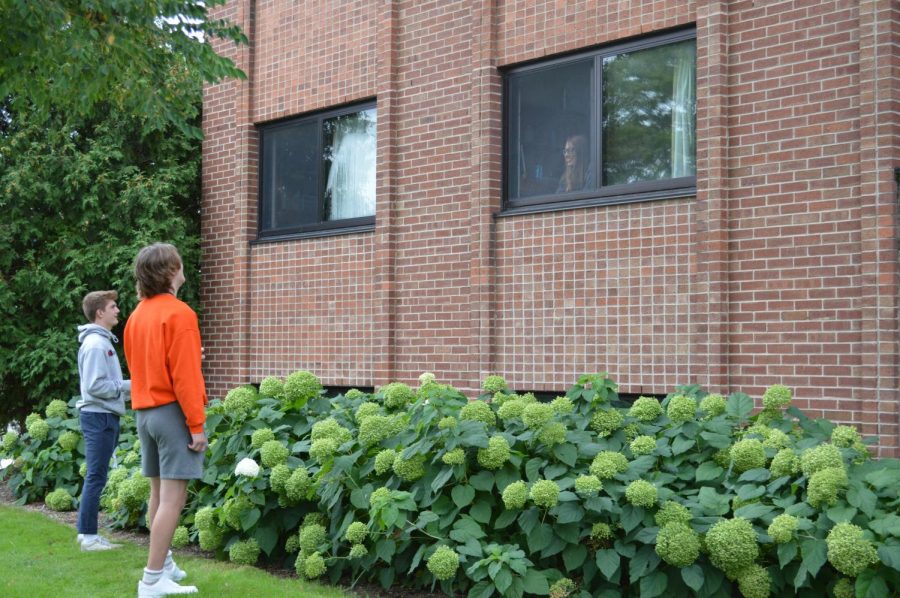 “As a result of this surge in cases, we are calling for a ‘shelter in place’ for Coate Hall effective immediately,” this from an email sent to the University of Wisconsin-La Crosse students.

At 4:22 p.m. on Thursday, Sept. 10, the UWL population received an email informing students that freshmen living in Coate Hall are being held in their residence hall for 14 days, due to a spike in COVID-19 cases.

The plan put in place by UWL for those students who came into contact with or contracted COVID-19 was to spend 14 days of isolation in Wentz Hall or Candlewood Suites in La Crosse, according to Director of Residence Life Jennifer Brundage. This available isolation space is at over half capacity, leaving those who tested positive in Coate Hall with no space for quarantine.

During the live webinar hosted by Chancellor Joe Gow on Aug. 13, when asked by a parent under what circumstances would UWL revert to entirely online classes, administration members told listeners that the university would adjust their plans after Wentz Hall could hold no more students.

In an interview with The Racquet Press, a Resident Assistant from Coate Hall, who would like to remain anonymous, said that they felt like they were being summoned when they got the phone call from the Coate Hall Director. The resident assistants in Coate Hall then had an emergency meeting where they were briefed of the lockdown, said the anonymous source, and then 20 minutes later the email went out to students.

“So we tested half of Coate Hall – we are getting randomized testing, in the halls randomly. And we tested half of our building in Coate, and we have 33 positive cases. So after testing 180-something kids we already have 33 positive cases. And that’s not even the whole building,” said the anonymous source. “And we don’t have enough room in the hotel and the hall [Wentz] anymore. So they were just like, ‘okay we have no place to put these kids, so we’re just going to put Coate on lockdown.’”

According to the campus COVID-19 Dashboard, 53 percent of the quarantine and isolation rooms set aside on campus are filled. Out of this percentage, 17 percent have tested positive, and 36 percent are at risk after having come in close contact with a positively tested person. Out of the available quarantine spaces, 74 of the 140 are filled.

The anonymous source says the lockdown will be held for the two weeks required for COVID-19 isolation, and without a unique medicinal or otherwise need, which are dealt with on a case to case basis, students are required to stay inside the dorm.

“So if you need to use the bathroom or the kitchen you can leave your room, or like laundry, but they want you to spend as much time in your room as possible. There is a food tent sitting outside of Coate Hall right now. And then people have the option of going to quarantine or going into lockdown at home if they would like to, but they still have to do the 14 days,” they said.

Resident assistants are scheduled to be tested every two weeks, and the anonymous source shared that to the best of their knowledge, this is the first round of randomized testing done in the residence halls.

Coate Hall houses 380 first-year residents, not all of whom were contacted for this round of testing, said the anonymous source. “We only tested half of the building, that’s 33 positive out of half of Coate Hall.”

The anonymous source said that although students were re-tested after the shelter-in-place was initiated, the resident assistants were not.

First-year Coate Hall resident Emma Saladis had previously contracted the virus over the summer, and because there had been less than 90 days between her initial encounter and the date Coate Hall students were tested, she was assumed negative, and not given a test. It was still expected that she would adhere to the shelter-in-place initiative.

“When I first found out it was from my RA and all she told us was ‘expect to hear some bad news via email.’ About 15 minutes later, reading the email and hearing we will be going into an immediate shelter-in-place made me sad immediately,” said Saladis.

She says that the decision frustrated her because she is best motivated by face-to-face learning. Three of her classes are in-person this semester. She said that she elected to go back to her hometown because the logistics of staying in her room would have made academic life hard.

“I decided to go home due to the conditions of staying in the dorms. You were not to leave your own dorm room unless to go to the bathroom or to get food. I did not want to be in my dorm for 2 weeks straight trying to balance school and my mental health. Also, my roommate and I would have to coordinate schedules and it is hard when we both have zoom meetings at the same time,” said Saladis.

Saladis said that she officially moved into the dorm on Monday, Sept. 7, and was on her way home by Thursday, Sept. 10. “Overall I chose to go home for my own safety,” she said.

Other UW schools are experiencing similar situations as well. UW-Madison placed two of their residence halls on a similar lockdown on Sept. 9, as cases rose. UW-Madison has also reverted to online schooling for the next two weeks in response to the case surge.

“Chancellor Rebecca Blank said in a statement UW did not see a need to send students home yet despite UW reporting over 1,000 total students test positive in the past weeks,” said Badger Herald Reporter Mary Magunuson. UWL Chancellor Joe Gow and UWL administration have made no statement regarding future decisions to date.

For more information on the University of Wisconsin-La Crosse’s COVID-19 situation, visit https://www.uwlax.edu/info/covid-19/dashboard/.