“I felt like I was in a lot of danger”: UWL students tell all on quarantine in Wentz Hall 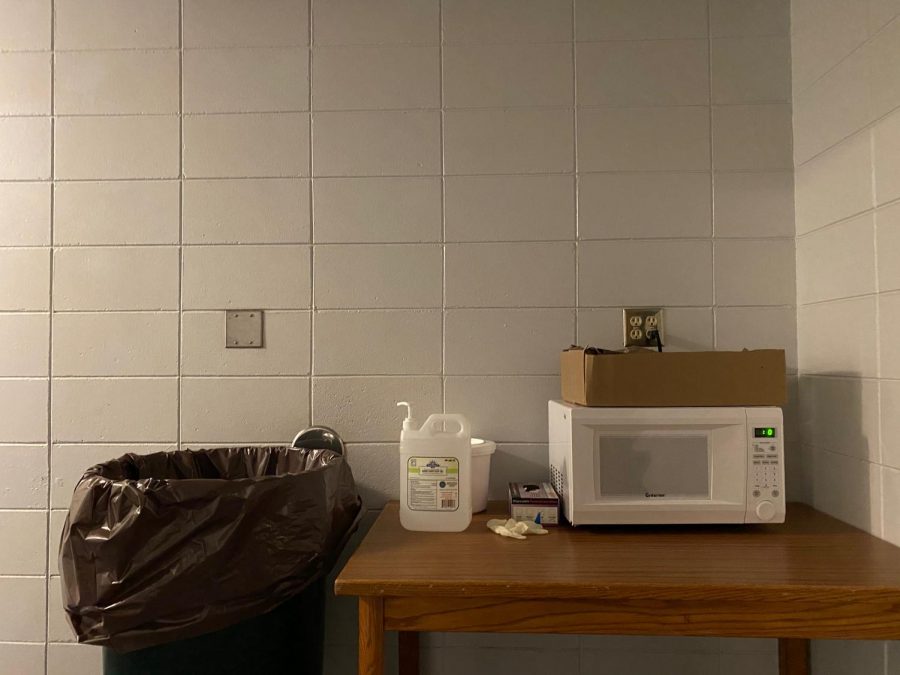 In preparation for the fall 2020 semester, the University of Wisconsin-La Crosse administration announced that Wentz Hall and some off-campus hotel locations would be utilized for quarantine/isolation rooms. As of Sept. 17, 89 out of 145 of the quarantine rooms are currently filled.

Quarantine supply boxes are dropped off daily to students who occupy quarantine rooms. However, a video that was posted to TikTok by UWL student Jake Wieneke showed a meal of beef stroganoff, wherein Wieneke questioned whether or not the meal had been expired. He had gotten the meal on Sept. 10, with the date “Aug. 30,” written on the take-out container.

UWL Student Association sent an email to students on Sept. 11 addressing the video, saying the meal was freezer-burnt. “University Dining Services has been preparing frozen meals in surplus ahead of time, knowing that there would be a possibility that students would have to quarantine in Wentz Hall and need food as soon as they moved into the facility,” this, from the TikTok centered email sent out to students.

This leaves some of the UWL community questioning the conditions of the quarantine/isolation rooms. The Racquet Press interviewed two UWL students, who were quarantined in Wentz Hall, on their experience during their stay there.
Sophie Byrne, UWL sophomore
UWL sophomore and general assignment reporter for The Racquet Press Sophie Byrne was staying in Wentz Hall after being tested for COVID-19 at the Student Health Center. She went to get tested after reporting that she had a sore throat and to make sure that it wasn’t COVID-19. “I got tested Wednesday [Sept. 9] right away in the morning. I figured that since I didn’t have any known exposure and I only had one symptom, I would be able to go quarantine back in my dorm room,” said Byrne.

Byrne said that she was not aware that she would be sent to Wentz Hall for quarantine after getting tested. “I had no idea I was going to be placed in Wentz,” said Byrne. “To be honest I would not have called and volunteered myself to be tested if I had known I was going to get stuck in Wentz.”

Byrne said she thought Wentz Hall was only for those who were heavily exposed to COVID-19, had multiple symptoms of COVID-19, or who had a positive case of COVID-19. “I didn’t realize that they were just putting anyone who went and got tested in there,” she said.

When an on-campus resident is tested for COVID-19 they are officially assigned a new room in Wentz Hall through Residence Life. Byrne said it took them a couple of hours after she got tested to get her new room assignment, her new room key, and an intake kit which consisted of some microwavable meals. “When you get to your new room in Wentz, it’s a totally bare room you don’t have anything. You need to bring bedding, clothes, all your textbooks,” she said.

Byrne said when she first arrived it was quiet in the residence hall. “After about an hour after I moved in, there was a bunch of commotion in the hall. The girls living in the same community as I was started running around in each other’s rooms, not wearing masks, and were sharing food. I was trying to do homework and they were outside being loud and distracting,” said Byrne. “Social distancing was not being monitored, there were never really any rounds or any presence of RAs or staff.”

Byrne said there was only one time that she noticed someone monitoring Wentz. “While I was in a Student Association meeting there were gatherings happening in the hall outside my room. Guys were coming up from the floor below and socializing with the girls in my cube. None of them were wearing masks, they were all in and out of each other’s rooms. At one point there had to be about 15 or 20 people out there based on the commotion,” she said.

Byrne said that she heard the people gathering saying that they didn’t care about social distancing because they think they already have it. “These were all people for the most part that hadn’t gotten their results back yet, but were just 95% sure they had it because they had either been exposed to someone who was positive, or had severe symptoms,” she said. “I got all of that just from being in my room and hearing it through my door.”

Byrne said during her first night in Wentz Hall there was a party occurring in the room next to hers. “There wasn’t that many people, there were a few guys and a few girls. Someone did rounds, which is the only time that it happened while I was there,” she said. “All I heard is them leading away the guys and sending the girls back to their own room in my community. I don’t really know if they faced any consequences for that.”

Byrne had stayed in Wentz Hall from Sept. 9 to Sept. 11 and was moved out after she received a negative test result. “On Thursday [Sept. 10] everyone in Wentz got a serious email about behavior and if students weren’t following protocols they would be assessed for conduct rules. So it got better on Thursday and Friday after that email was sent out,” she said.

“I don’t understand why me, with such a low as a fairly low possibility of a case, I don’t know why I was stuck in with people who had severe symptoms and who have definite exposure. I was just very confused as to why that was a thing that happened,” said Byrne. “I felt like I was in a lot of danger, and even after leaving I feel that I am still in danger.”

Byrne said that she felt she could have been exposed to COVID-19 during her time in Wentz Hall, and could have left with COVID-19 despite having a negative test result when she arrived. “I could definitely still come down with symptoms after leaving, and it could be as a result of Wentz.”

She said she felt very unsafe sharing a community bathroom with people who were positive. “I was only leaving my room twice a day. I would usually leave my room at 2:30 a.m.to avoid seeing people in the hall,” said Byrne.

Byrne said she saw very few protective measures in the residence halls. “In Eagle at the front desk, there were two crappy plexiglass boards to protect the desk assistants,” she said. “I think UWL has not done a good job to protect staff and people [in residence halls]. I feel like the university needs to accept some responsibility, and apologize to the students, especially the freshman class because they got the short end of the stick here.”

Byrne moved back into Eagle Hall after she was released from quarantine, and has since canceled her housing contract. Byrne now lives off-campus in the La Crosse area and is quarantining from her home.
Ethan Rindfleisch, UWL junior
UWL junior and resident assistant in Hutchison Hall stayed in Wentz Hall for two weeks to quarantine after being exposed to COVID-19. Rindfleisch was placed into Wentz Hall on Aug. 31 before the start of the fall semester. “I did test negative for COVID-19 thanks to the protective measures that Residence Life implemented and enforced for student staff members even before residents arrived,” he said.

Rindfleisch said his experience in Wentz Hall was not the most comfortable. “It was overwhelming, frustrating, stressful, and emotionally exhausting,” he said. “Thankfully, every member of the Hutch staff team was there for each other to support each other and process through what we were all feeling.”

While he was in isolation at Wentz Hall, the Hutchison staff team and Hutchison Hall director Carol Vang set up a meeting with the director of residence life Jenni Brundage, and coordinator of high-impact practices in Residence Life Victoria Carlson to discuss feedback concerns and to try to make the process smoother for future on-campus students who would have to quarantine in Wentz Hall. “A couple of days [after the meeting] we received an email from Jenni where she addressed each topic that we brought up with a solution. The fact that we were able to have a meeting with administrators where they listened to us and followed up on our concerns to make an actual change on campus was very empowering,” said Rindfleisch.

Social distancing in Wentz Hall is largely self-monitored by students. Rindfleisch said there are gloves and wipes by the microwaves and wipes in the bathrooms so that residents can clean all surfaces they touch. “However, after Wentz started filling up with residents, it became evident that stricter enforcement would be necessary,” he said. “So the director of residence life informed us that there would be a ‘no tolerance’ policy for violations and that University Police would be doing rounds each night to enforce those policies.”

Rindfleisch said that resident assistants were not placed in Wentz Hall for their protection. Rindfleisch also said that Residence Life has been proactive in keeping the health of staff and residents in residence halls safe. “They cut back nearly all of our in-person requirements,” he said. “We still go on duty rounds because we have to ensure our residents are safe, but Residence Life has provided us with [personal protective equipment] PPE to protect us.”

Rindfleisch said his experience as a resident assistant in Hutchison Hall is interesting and different than usual. “I spent the first week of classes in quarantine and was only able to start meeting and interacting with my residents for a couple of days before the shelter-in-place order happened,” he said. A majority of Rindfleisch’s residents had moved out of the dorms during the two-week “shelter-in-place” order for all residence halls, so he said it has been hard to get to know residents. “It’s frustrating that we can’t do community bonding activities like grill-outs or intramurals because of COVID-19, but we are finding new ways to make those connections,” he said.

Rindfleisch said that it is easy to point all the blame at administration. “We as students need to take some accountability as well. The campus created new policies and procedures to protect students on campus, but now they have to react to the fact that some students are choosing to ignore the policies regarding facemasks and social distancing,” he said.

He said that it is up to students to keep the campus open. “In my opinion, the university has done everything it can to balance our health, safety, and education with its financial well-being – it’s up to us to use those protective measures to protect ourselves and keep the campus open,” he said.