Photo Series: 2020 March to the Polls 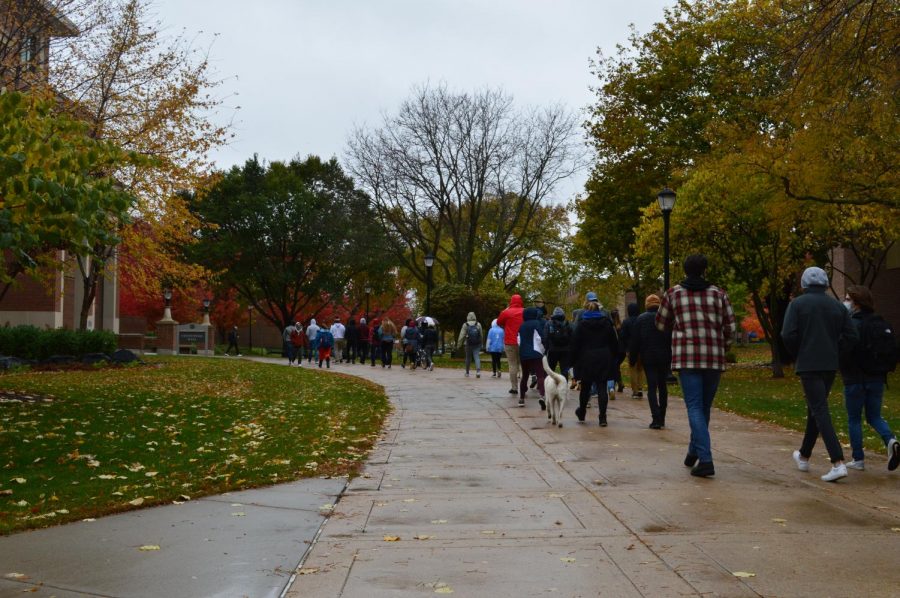 UWL students march through campus on their way to City Hall. (Photo taken by Maija Sikora).

On Oct. 23, 2020, the March to the Polls event occurred, with University of Wisconsin-La Crosse students and community members in attendance. The event was created by Campus Election Encouragement Project (CEEP) and the Andrew Goodman Foundation (AGF) to promote Vote Early Day, which is on Saturday, Oct. 24. The event was organized by UWL students Courtney Conway, Gurtej Grewal, and Ryan Kreiser.

The event began at 12 p.m. with an introduction from event leaders and a speech of encouragement for young voters. At 12:30 the march began at the south lawn of the UWL Student Union, with organizers leading the march through campus to La Crosse Street and then to La Crosse City Hall. Once City Hall was reached, marchers were given the opportunity to register, cast their ballots, or turn in absentee ballots.

UWL senior and AGF Ambassador Courtney Conway spoke with The Racquet Press on the planning of this event. She said that UWL senior and CEEP fellow Gurtej Grewal originally thought of the idea for the event at UWL. “Gurtej was the team member who had the idea to plan a march to the polls. Our meetings usually consist of the two of us, another student named Ryan Krieser, and our advisor Kelsi Grubisich. We brainstormed different ways to spread the word and make the event more inclusive and fun. In doing so we reached out to Vote Mob, NextGen, the League of Women Voters, and other groups with the goal of increasing voter turnout on campus and in La Crosse as a whole,” she said.

They additionally provided drivers and vehicles that could drive participants from the Student Union who wanted to take part but couldn’t walk to City Hall so they could still participate.

Anyone who participated in the event was required to wear masks and social distance from others. “We have tried to make this event as safe as possible by holding it outside and requiring masks and social distancing. The drivers will be volunteers who understand the risks associated with transporting others. Drivers will be wearing masks and requiring their passengers to do the same,” said Conway. “La Crosse has seen how terrible the spread of COVID-19 can be, and we do not want to add to the hurt our community and its members are feeling as a result.”

Conway said that their main goal for this event is to increase voter turnout and to make participants feel confident and empowered in voting. “Our main goal is to increase voter turnout. Voting early allows people to vote in a safer environment considering the risks associated with the pandemic,” she said. “Also, early voting accounts for potential mistakes that happen in the election process (e.g. having an expired ID or forgetting a proof of residence) by allowing people time to fix them before Election Day. We hope by providing people with the support and information they need to vote, people are confident and feel empowered to vote themselves.”

When marchers reached City Hall there were two separate lines for participants. One was for those who need to register and the other was for those who wished to vote early in-person. People can also drop off their ballots at the green drop box at City Hall if they do so before Election Day, as long as they are voting in La Crosse. If someone is voting absentee from home, they will have to return their ballot to the municipal office in their respective location.

When asked about why she believed it was important to vote, Conway said, “Elections have consequences, and they oftentimes harm the most marginalized groups the most. Not coincidentally, those groups are typically the ones whose votes have historically been denied and are currently being suppressed in numerous ways. I have seen firsthand how decisions made in government have hurt and helped myself and members of my family and community depending on who was in office. We each have a say in who is going to make those decisions and I believe it is essential that we use that power in the polling booth.”

Follow @uwl_votes on Instagram to receive updates on the upcoming election and information on any future events.