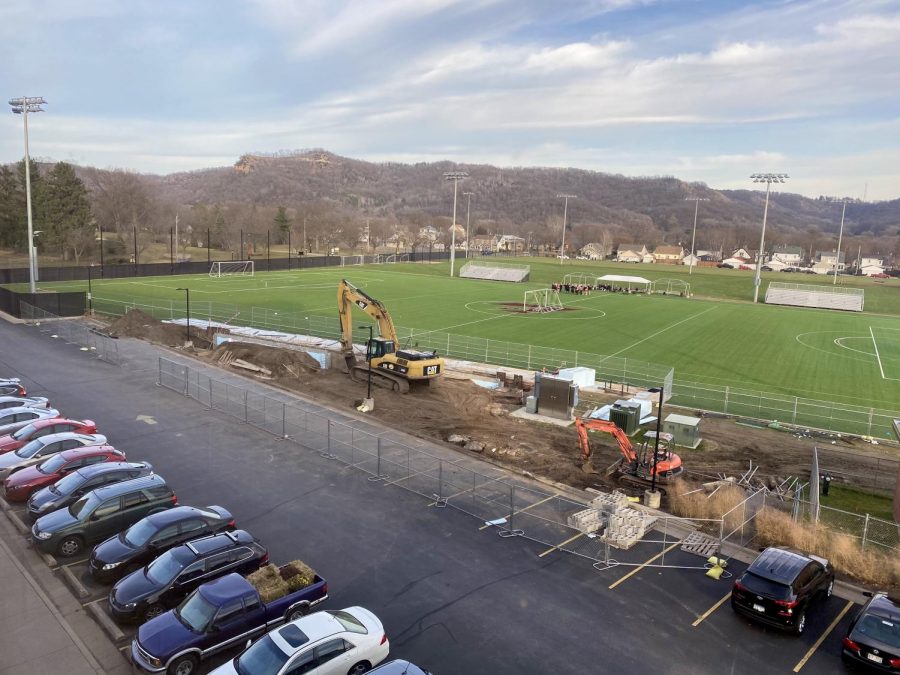 This partial closure of the R-4 is due to the construction of the soccer and lacrosse support facility,    which is part of the new field house project, not construction on the parking lot itself.

Campus Parking notified students in the email that if they were parked in the red or gold shaded area (see image), they would need to move their vehicle to the C-3 lot by 7 p.m. on Thursday, Oct. 29, 2020.

Also mentioned was that the closure would “last [four] weeks but may go longer depending on weather conditions”. As of Dec. 1, 2020, the closure is still implemented.

According to the Associate Director of Planning &

The fenced area occupying 24 parking spaces serves two purposes for construction. “One is to create a safe working area that also prevents potential damage to cars. The second reason would be to allow for utilities (water, sewer, etc) to be installed to support the building,” said Schumacher.

The delay in construction is irritating some students, due to its effect on parking. According to Schumacher, “The plan was initially to have both the foundation for the building and the utilities complete before winter. Due to unforeseen circumstances, the utility work will likely have to wait until spring.”

Sophomore, Emma Rosolek said, “Because the Reuter parking lot is one way, a lot of the times I would go all the way through, not find a spot, and end up being like, ‘well, shoot.” I have to exit onto the street and park at C-3 lot. It was kind of a hassle.”

For Rosolek, the added time walking to Reuter Hall is also a frustration. “It’s an annoyingly far walk, especially when you have to carry stuff like groceries. It’s not ideal,” said Rosolek.

Sophomore, Lily Human, said while she was able to find a parking space in surrounding lots, the construction has made parking difficult. However, according to Human, the COVID-19 pandemic has opened up parking spaces due to the lack of students on campus and said was, “probably the only reason I can find a spot.”

Another issue for some students was the late notification about the Reuter Hall parking space closures.

“We tried to notify students as soon as we were aware of the timeline. We do have certain controls over what work is done and when, but typically, the details of the schedule are left to the contractor for the most part,” said Schumacher. “We coordinate the construction, but the State Division of Facilities Development and Management actually holds the construction contract and manages the work. So, it may seem like we do not have as much control over the details of the work as some people would think.”

Rosolek said she was unimpressed with the communication from Campus Parking. “I got an email out of nowhere about it, telling me the regulations started the next day. I was annoyed because they hadn’t said anything when I bought my parking pass. It was like, ‘where did this come from and why didn’t I know about this earlier?,’” said Rosolek.

Human expressed similar frustrations. She said she wished that the students would have had some notification before signing up for parking passes at the beginning of the fall semester.

“I also think it’s kind of unfair when people expect to get something, and they end up changing it up midway through,” said Human. “They probably should have disclosed if they were going to be doing construction earlier in the year or before people signed up to get a parking pass.”

Overall, the University of Wisconsin La-Crosse students said that they would have appreciated earlier and clearer communication from Campus Parking.