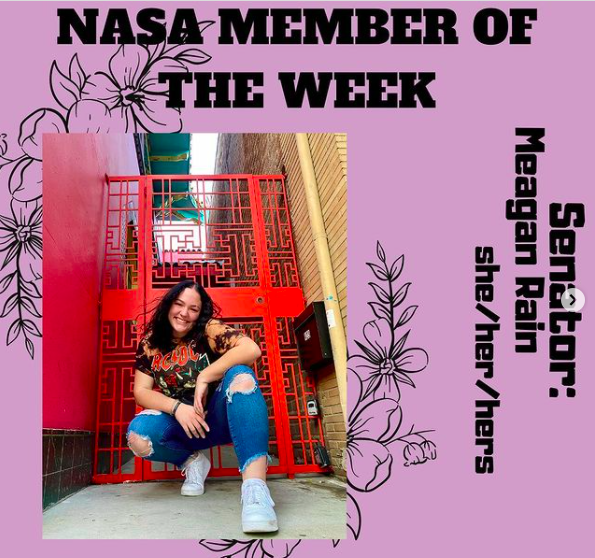 University of Wisconsin-La Crosse junior Meagan Rain is a political science major and international relations minor. Rain is also a student senator for the Native American Student Association (NASA) and was featured the week of Nov. 9, 2020, as the NASA member of the week.

Rain discusses the atmosphere provided by NASA amidst the pandemic. She says, “This year especially, our group is focused on being there for each other and being a support system.” Rain discussed the normal activities for NASA which include outreach, events for the community, and educational services.

Rain said she wants to emphasize the inclusiveness of NASA. “A lot of people think that it is just for Native American Students. NASA is a very welcoming organization for all people. We would be glad to have anyone join. We love people,” she said. When Rain is not working on school or extracurriculars, she can be found doing one of her passions: art.

Rain said she has been interested in painting since her freshman year of college. “I started painting because I have really bad anxiety. Painting is a really good outlet for me to help calm me down,” she said. Rain said she has been painting to keep her occupied during quarantine. “I actually had COVID-19 twice. I was doing everything I was supposed to, but I got it at work. I was trapped in my room for three weeks. I just sat here and did homework and painted,” she said. Rain said that living during the pandemic has allowed her to focus on her artwork and her mental health.

Rain said she began with canvases and old records but eventually moved to paint pours. A paint pour is a process that includes mixing acrylic paint with other mediums and pouring it over a desired surface. Rain said, “It’s a very messy process if I am going to be honest. You have to mix a bunch of things together, slap it down on a canvas, and hope for the best.”

Rain has sold her work to multiple friends and on Facebook Marketplace. When asked how much the paint pours sell for Rain said, “It depends on the size of the canvas. The bigger the canvas the more paint I have to use.” Prices range from $10 to $50 depending on the size of the canvas but on average they are usually $15 to $25. Rain said she sells other artwork as well, but she says paint pours are her favorite and most common work.

Rain said, “It sounds bad, but it’s easier for me to mess up and still have it look good.” Rain discussed the messy and complicated process that includes clear glue, silicone oil, mod podge, and paint.  She says the process is messy and tedious and takes one or two days to dry.  “It’s super messy, I get it all over me every time. It stains my clothes and my skin. It’s so worth it, It’s so amazing. I recommend it 100%,” said Rain.