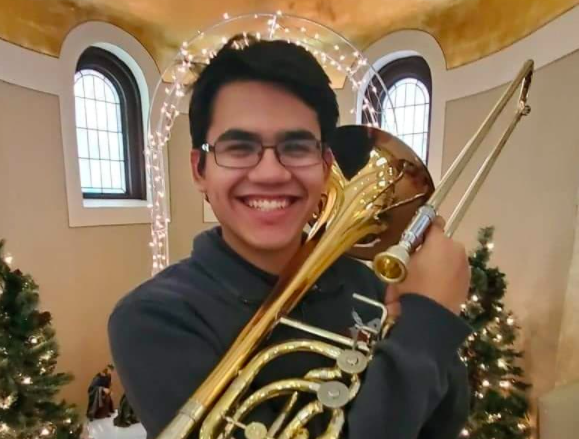 University of Wisconsin-La Crosse freshman Leo Chavolla is an involved member of the La Crosse area arts community. His involvement began in 2014 when his family moved to the region from Mexico and continues today as he studies jazz performance at UWL.

Chavolla said he has experience playing many different instruments. “I started playing guitar in Mexico and then I played piano, then joined the choir. The choir dissolved and then my piano teacher left. When I came to the states I started playing euphonium,” he said. Chavolla also later added bass, trombone, and sousaphone to expand the types of musical groups he could play with.  After initially starting college at an agricultural school, Chavolla said he realized that path was not for him and turned his attention to music.

Chavolla said he looked at a conservatory in Mexico that had an emphasis on classical music. He said that because of his interest in jazz performance, the fledgling jazz program did not seem like the right fit. “The jazz professor is nice and he’s good at it – he knows what he is doing – but the jazz program is definitely in the creation stages,” he said.   UWL intrigued Chavolla because it was close to where his parents live.

Chavolla said he was also drawn to La Crosse because of the vibrant community of musicians and performers that he already had connected to during his years in high school. “I already knew a little bit of the music scene around here so I thought, ‘Well, if I’m here I can do the productions at the Weber Center and the La Crosse Community band and the La Crescent community band,’” he said.

During his time in the La Crosse region, Chavolla said he has also been involved in productions with the La Crosse Community Theatre, UWL Jazz Orchestra, UWL Wind Ensemble, and Screaming Eagles Marching Band. Next semester he looks forward to adding the Symphony Orchestra and spring drumline to his ensemble schedule as well, “Not to toot my own horn – pun intended.”

Chavolla said he spends most of his time on campus in the Center for the Arts, practicing, going to class, and conversing with his friends and peers.

Annett recital hall is Chavolla’s favorite place to practice because of the sound it produces and the useful practice it offers him as a musician. “It’s a big room and it’s good practice for us brass players – and any musician really – to practice filling up the room,” he said.

Off-campus, Chavolla said he enjoys going to antique shops in downtown La Crosse to look for records. “I actually have a record from 1972 from The Tribe, which at the time was the jazz orchestra here at UWL. It’s got this old crusty sleeve – it sounds really good and the players are really good!” he said. Outside of music, Chavolla said one of his long-term interests has been the videogame SimCity 4. “It’s a city building game, so you make the roads, you make the zones, you put schools and fire stations and all that stuff. I don’t know how accurate or real the mechanics are but it’s pretty interesting,” he said.

Outside of music performance, Chavolla has recently found work with local La Crosse business owner Dana Erickson on various audio/visual projects. His background with CAD [computer-aided design] drafting and machining has been a useful asset in this position, he said.

In addition to the UWL ensembles, Chavolla has also recently been accepted as one of two trombonists in the Kids From Wisconsin group. The group puts on a themed, Broadway–style show that typically travels around the Midwest giving performances. “I think there’s like 30 dancers and singers, and then there’s like a pop band in the back. Four trumpets, two trombones, four reeds, drums, bass, piano, guitar,” said Chavolla.

Because of the COVID-19 pandemic, the rehearsal weeks have been limited, more virtual meetings have been employed, and there will be fewer opportunities for crowd interaction after the show. “It’s supposed to be very interactive with the public in normal years,” said Chavolla.  Still, Chavolla said he is excited for the performances. “It’s going to be a blast! It’s two months of solid performing, traveling, performing, traveling.”