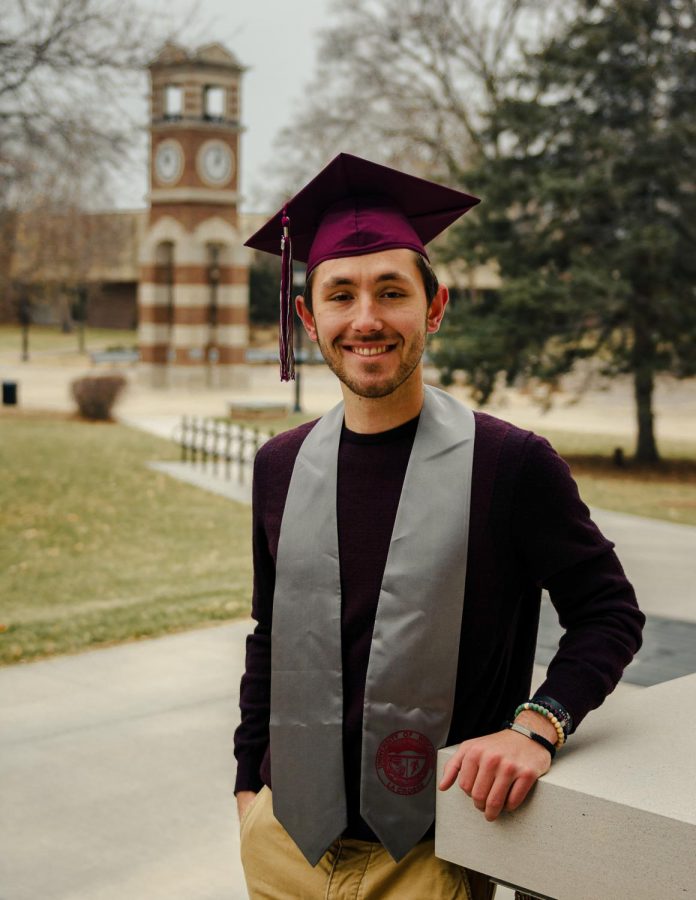 Recently graduated senior from the University of Wisconsin-La Crosse, Seth Polfus, reflects on his undergraduate experience and envisions his future in light of the COVID-19 pandemic. Polfus graduated with a major in exercise and sports science on the pre-physical therapy track and a minor in photography.

Polfus grew up in Hermansville, MI, in a town of around 1,000 people, with 27 students in Polfus’ graduating class.

When asked how he ended up in La Crosse, Polfus said that a few years ago, his family went to a concert at Fort McCoy and decided to stay at Pettibone RV park to tent. They looked up the nearest ice cream shop and were directed to The Pearl. They walked around downtown and thought La Crosse was a beautiful town. When applying for colleges, Polfus took into account his family’s experience and another of his own. In his sophomore year of high school, Polfus tore his ACL while playing basketball. While recovering, he had a great experience with physical therapy and knew that he wanted to become a physical therapist. Polfus said that UWL’s physical therapy program made the college decision process much easier.

Another aspect that Polfus liked about La Crosse was the size of the campus. “Especially coming from a small high school, one of the things I liked was the small class sizes. The majority of my classes were fifteen to twenty people, so I got to know them personally one on one. La Crosse really had that small town feel, especially with how the campus is laid out,” said Polfus. He also enjoyed being a part of the outdoor recreation community that hiked, backpacked, ice climbed, rock climbed together.

Some of Polfus’ interests include disc golf, camping, hammocking, exploring the outdoors, meditation, and photography. At first, photography started as a hobby for Polfus. Eventually, he created his own business to do more portrait work. Nature and landscape photos are his favorite, however he is trying to book more portraits and has also started selling prints. During his time at UWL, he also did an internship with the campus photographer, Michael Lieurance. “With photography, having a mentor is really valuable,” said Polfus. Now that Polfus is in the La Crosse area full time, he is trying to develop a clientele base from scratch. He said that it has been a good experience.

When asked if he would like to give a shoutout to any professors, Polfus said that Linda Levinson and Kathleen Hawkes “created such an interest within [him] for photography”.  “Freshman year I never saw how far it would take me,” said Polfus. Having recurring classes with the professors due to his minor helped “create a good connection with both of them”.

Another aspect of Polfus’ college experience that he appreciated was being a resident assistant (RA). Although most connections with residents this fall semester were conducted virtually over WebEx with little in person interactions, being an RA last year was much more enjoyable for Polfus. “Last year, I had the greatest community ever in Eagle Hall. I was the RA of the outdoor recreation community. It was a bunch of outdoorsy students like me. I still see some of my residents around. We became friends, and it was awesome to create that bond,” said Polfus. However, it can be hard to navigate the role of an RA. “I am your supervisor kind of, but I’m also just a student like you are. I tried to be a friend more than anything else,” said Polfus.

During his freshman year, Polfus’ RA emphasized the importance of getting outdoors and organized engaging activities for their residents. Polfus tried to remember the impact his RA made and the support they provided when taking care of his own residents, especially during the COVID-19 pandemic. “The ones who I really think about are the freshman. They had their high school graduation canceled, and now their Freshman year has been impaired in a lot of ways,” said Polfus.

Polfus shared his own challenges as a Freshman. “When I came in as a Freshman I didn’t know anyone. I was just from Hermansville, where we didn’t do anything on the weekends, where we would just go to Walmart for fun,” said Polfus. Although he said that it can be hard to get out of your comfort zone during the first year of college, one way that Polfus was able to connect was by attending every event and seminar that he could. “I made a lot of acquaintances over the past three and a half years, people I only met one time, but those relationships are still so valuable. The conversations we had changed the way I thought a little at a time,” said Polfus.

When asked about his plans after graduation, Polfus said that he searched for jobs for around two to three weeks. “There was nothing in my field, which after three and a half years of studying, I was hoping to get a job in exercise. I pretty much did everything I could. I reached out and called every business in the La Crosse/Onalaska area that had any resemblance to my major, and no one was hiring. If anything, they were decreasing their staffing needs,” said Polfus. He was already planning on taking a gap year before applying to physical therapy school and found an opportunity within the La Crosse area to help him learn and grow within this time.

“Pending approval by the school board, I am accepting a position at Onalaska Middle School as a special education paraprofessional. I’m taking a gap year before physical therapy school and intend to apply this summer and I’m hoping to get into UWL, that’s my number one option. I wanted an occupation that would give me the time to continue photography on the side and also give me a way to help others,” said Polfus. Some requirements of his job include chaperoning students, helping teach the class, grading, and helping at recess. “It makes me nervous because I don’t have a lot of experience, but it allows for so much learning, which I’m excited for,” said Polfus.

The fall 2020 semester was a whirlwind for Polfus. “Last semester was pretty wild in general. It gave me a lot of time to spend with my family that I haven’t had, which I am grateful for. I reflected on it a lot, obviously I missed out on a lot that my last spring and fall semesters had to offer,” said Polfus.

The graduation process was also bittersweet. “It’s kind of saddening to think that we couldn’t walk across the stage and that it was just me and my friend Taylor watching it online. At the same time, there’s people losing their lives and there’s families that are grieving every single day across the country. Just the fact that I won’t be able to walk across the stage is pretty small when compared to that. I try to frame it like that just so I can keep a positive mindset. With the vaccine coming out, there’s a lot of hope now too. I have a lot to be grateful for, regardless of if a lot of my senior year was lacking in the way that I was able to interact with others,” said Polfus.

In the future, Polfus would like to possibly become a traveling physical therapist, however, his plans are not set in stone. “Especially with COVID, you live one week at a time. Life is going to change and I’m just going to be led wherever it takes me,” said Polfus.