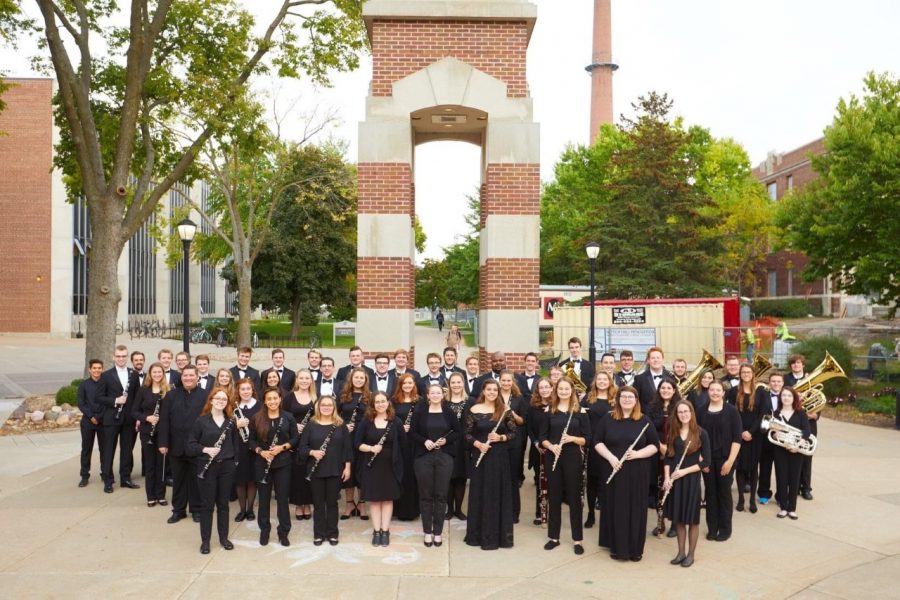 The University of Wisconsin-La Crosse’s Wind Ensemble recently got the opportunity to perform the world premiere of composer Nicole Piunno’s piece “Letters from the Traveling Doll.” The piece was recorded on March 7 at Viterbo University’s music hall and was the ensemble’s first live show since COVID-19. The recording was shared virtually on YouTube and Facebook.

After numerous performance cancellations over the past year, this was the ensemble’s first time back on stage. UWL junior Jacob Jorstad said, “It felt like home…it reignited my love of performing.” This performance is just the beginning, the ensemble also has their spring concert planned for April 24 at the new Concert Hall at G.E.T High School.

The ensemble has faced several challenges this past year, especially with COVID-19 restrictions. Jorstad explained that they are only able to rehearse in a room for a half-hour due to the way musical instruments spread aerosolized droplets.

At four points during their 2-hour rehearsals, the ensemble must pack up their equipment and set it up again in a new room. The ensemble must also wear masks while they rehearse, although their masks do have mouth holes so the instruments can be played.

“It’s dedication,” said ensemble director Dr. Justin Davis. “The students have never complained. Not once. It says a lot about how grateful they are to be able to play.”

UWL ensemble member Mackenzie Taylor explained that all the instruments have bell covers to reduce the air being spread, the covers are pieces of fabric with elastic that is put over the instrument to reduce the number of aerosol droplets being released. However, this can affect the range and tone of the instruments and can make it difficult to perform certain pieces. Taylor, who plays flute, has a cage that goes over her instrument which impacts her ability to play specific notes, as well as the clarity of sound.

Davis explained that the last year has had a big impact on the ensemble. “We are moving ahead full steam despite having a rough fall. We were back in person but we didn’t have our sea legs yet. We didn’t feel grounded, but this semester we recommitted and have done great work,” he said.

Davis was one of the main reasons the ensemble had the opportunity to premiere the piece. He had worked with Piunno in the past and was able to get the university on board to back her financially. UWL led a consortium with seven other groups to help fund the creation of Piunno’s piece. Since it was spearheaded by UWL, they were asked to be the first to premier it.

Taylor explained that premiering a piece had its challenges since there was no recording to compare it to. “You know that what you put out will be the baseline for every single performance afterward.” Luckily the ensemble was able to perform over Zoom for Piunno before the performance so she could give feedback and make edits to the piece.

Davis also explained that the ensemble wants to support lesser-known composers and so it made sense to work with Piunno. “We are a big believer in supporting new composers and new music. Especially new music by people who are often viewed as underrepresented composers,” Davis said. “Persons of color, women composers and others who have not always had the limelight in our eurocentric white bred classical music…we need to make sure those voices get out there.”

The ensemble is currently working on another piece by Piunno called “Where Words Cannot Go.” UWL was a part of the consortium to help fund the creation of that piece as well. It was intended to be performed by the ensemble last May but was put on hold due to COVID-19. The piece is about love and grief and is very fitting given what the past year has brought to our communities.

Not only is the piece relevant given the loss experienced with COVID-19, but it is also extremely meaningful for students on campus. Davis said, “Music is often something that helps people grieve when no words make sense.”

The piece has hit home for students mourning the loss of a fellow student who recently died by suicide. “We were rehearsing the piece last night and I had a student who had to leave the room because they were overcome with emotion….This is just an example of how powerful music is. We are dedicating this performance to everybody who has suffered loss for whatever reason in this last year.”

The wind ensemble currently has around 50 members and is open to all students regardless of major or minor by an audition process. It is a one-credit class, however, most students are members throughout their college experience. The Wind Ensemble’s performance of Nicole Piunno’s “Letters from the Traveling Doll” can be viewed at  UWL Wind Ensemble in concert “Letters and Dance.”