The Racquet Press • May 3, 2021 • https://theracquet.org/11757/news/uwls-theatre-departments-spring-musical-songs-for-a-new-world/ 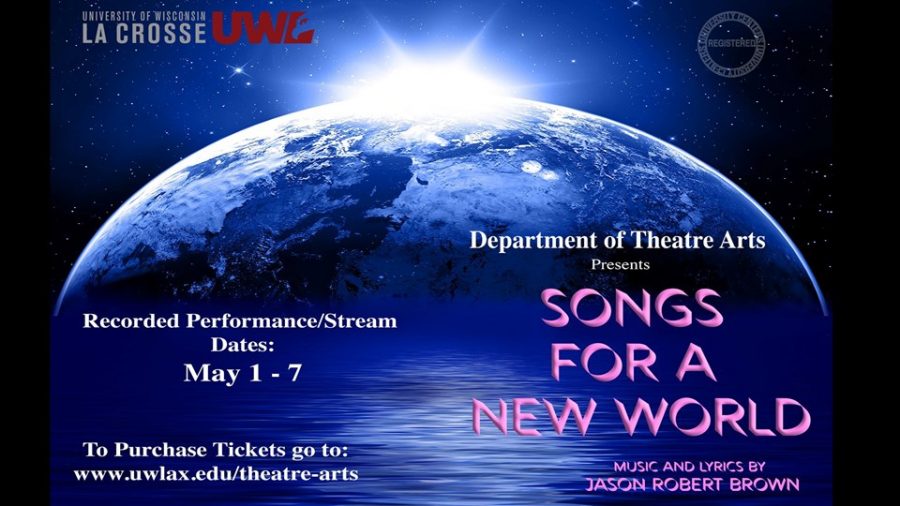 The University of Wisconsin-La Crosse’s theater department is preparing for their spring musical “Songs for a New World” which will be available via on-demand streaming May 1 through May 7. Tickets can be found by visiting the department’s website. In a similar style to other productions this year, the show is performed virtually to allow for social distancing. The show was pre-recorded on stage and can be viewed at any time during the week it is available.

Songs for a New World is unique because it doesn’t have an overarching plot or recurring characters, instead, each song is its own story and represents a specific moment in time. The show deals with love, loss, and hope. Erik Berg, a sophomore at UWL, explained that the main theme of the show is emotional enlightenment and finding yourself and that each storyline is tied together with emotion rather than an actual plot. Berg said, “there’s a message in every single song that can resonate with somebody in some way.”

The songs for the show were pre-recorded since singing on stage would create droplets that can spread germs, and then the tracks were played during the performance while the actors lip-synced. Because UWL doesn’t have a recording studio, the department improvised and created their own by putting up plexiglass with gym mats over them to block outside noise and get a clear recording. Most theater students don’t have the opportunity to experiment with voice recordings, so, while the situation was not ideal, it provided a unique learning opportunity for students.

Emma Henry, who plays three different characters in the show, said trying to lip-sync during the performance was a new challenge. “It was just weird, like you had to make sure every word was connected with your mouth, so yeah there were definitely times when I turned away from the camera because I was like “I don’t know what I’m saying.” Berg agreed, saying “when you watch the show it’ll look fine but, from our perspective it’s been a little bit weird to have to sing and breathe the same way that we would on stage without actually saying anything”

There were also some benefits to having the songs pre-recorded. In a live show, mistakes can happen, but with the recording, the actors didn’t have to worry about hitting the notes and could focus on their characters more. Henry explained that “everything always sounds the same (with the recording) and so that gave me more freedom to play with my characters, so that part definitely helped.”

The cast got their music in January and started rehearsing in March. Each cast member would show up for only 30-45 minutes and rehearse their songs, to allow for safe distancing. In April they started to record the songs and rehearse on stage for the final recorded production. While the cast does not wear masks during the performance, they are all safely distanced, and lip-syncing minimizes the spread of germs.

While there still wasn’t an audience, this was the closest thing to “normal” the theater department has seen since the beginning of the pandemic. The department is optimistic that staged productions with a live audience will be possible in the fall. Berg said that he is grateful for the opportunity to perform again, and while he is aware things still aren’t ideal, he encourages people to give the virtual show a shot, saying “ it’s so nice to be able to have an outlet to be able to put such important and intentional songs out there in front of people….we’ve been adapting well this whole time, but we’re all excited to get back into being able to, hopefully, be in front of an audience again.”