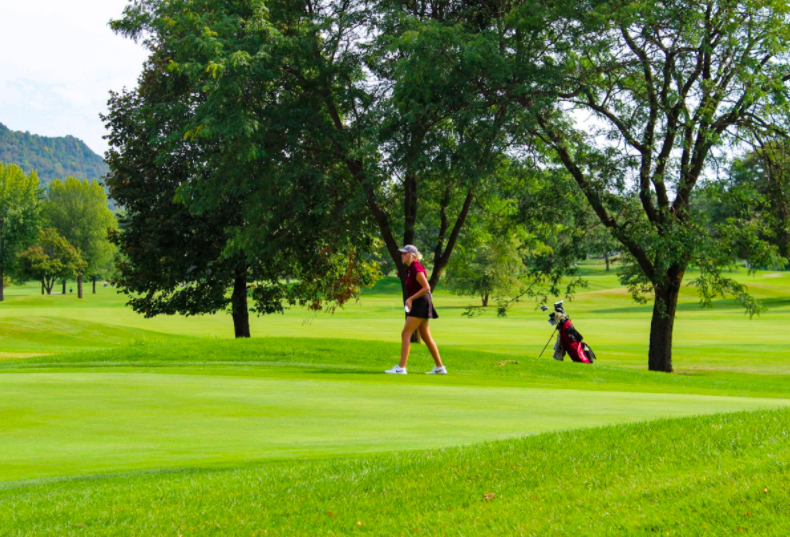 The University of Wisconsin-La Crosse golf team started out their 2021 season with back-to-back second-place finishes. Their first tournament of the season was the University of Wisconsin-Oshkosh Invitational, held on the weekend of Sept. 4, at the Oshkosh Country Club. This past weekend they held their home tournament at The Golf Club at Cedar Creek in Onalaska Wisconsin. The Eagles had three players in the top-10 at Oshkosh and four players in the top-10 at the Cedar Creek invitational.

They said that while starting off the season with two second-place finishes is good, they know they have not played their best golf yet, according to senior Captain Maija Tanberg in an interview with The Racquet Press. “It was a pretty good start, but that is not how we wanted to play,” said Tanberg, as she comments on the team’s performance in the first tournament.

The team has four new members this year, and they are still working on group dynamics. “Tough to know how we will mesh as a team,” she said. But overall Tanberg was proud of how they competed. “Knowing that none of us really played our best and still taking 2nd, we are ready.”

“The first weekend we had, it was a bit chillier,” said Senior Co-Captain Haley Dunn, as she speaks on the conditions they played in during their first step onto the field. “Overall very nice.” This is the first official fall season the golf team has had since 2019 due to last year’s cancellation of all Fall sports due to COVID-19. “We are getting closer, but still adjusting.”

Dunn talks about what the team anticipates will happen as the team adjusts back into a normal season. They had the opportunity to play last spring, but, as Dunn says, midwest springs are second winters, they had less opportunities than they would have liked. “In the spring we are bundled and can barely swing.” Tanberg says, “But everyone plays through it so we have to too. The fall is the definitely the time that we want to play.” There is a clear consensus that the team is excited to be playing in the nicer weather.

Both captains agree that placing well at Conference is their goal for the season. At the end of the fall season, all the schools in the Wisconsin Intercollegiate Athletic Conference compete for the chance to be conference champions. They finished second in the tournament last year in their third year as a program. According to Tanberg, they know they have the girls and the talent to win conferences.

The captains have faith in their coach Dave Tabel. He has been with the team all four years of its existence here at UWL. “Seeing the progress, the team has made… our coach has done an excellent job,” said Dunn. “I am so happy I chose this school” Dunn has been with the team all four years and took a chance on a new program and there is no regret from her end. “We just want to applaud our coach,” Tanberg said. “Taking our team in its third year and getting second, and then having the chance to win this year is impressive.”

There is no shortage of confidence and excitement for this season. While for them it is not the start they wanted, this still very young program is showing the other WIAC teams that they are contenders.