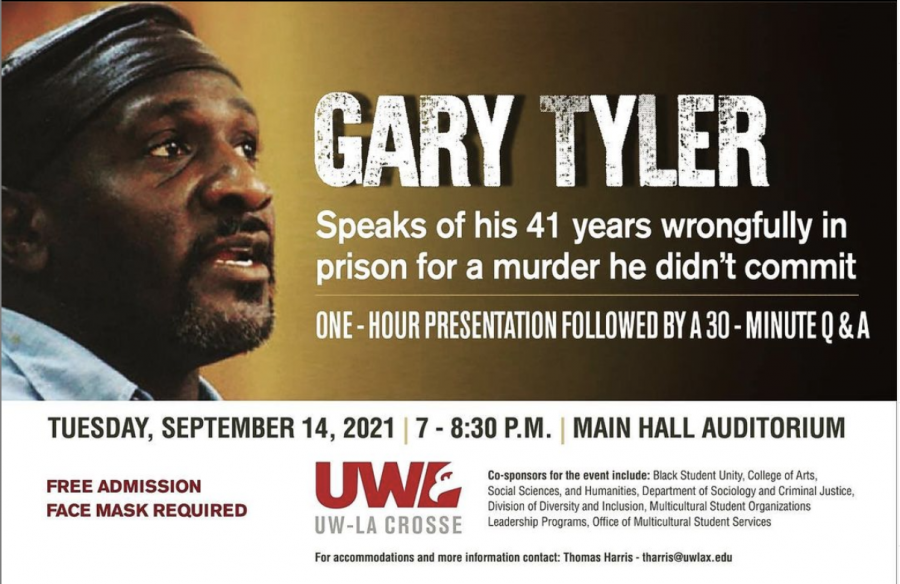 Gary Tyler was 16 years old when he was wrongfully convicted of first-degree murder, sentenced to death row, and sent to maximum-security Louisiana State Penitentiary. On Tuesday, Sept. 14, Tyler presented to a full auditorium at the University of Wisconsin-La Crosse. Tyler described him over 41 years wrongfully imprisoned and touched on topics such as racism, rehabilitation programs for convicts, as well as what it was like to be on death row.

Tyler was introduced by Vice President of Black Student Unity (BSU) Jaiya Edwards, as well as Nicholas Bakken, a professor in the Sociology and Criminal Justice department. The talk and subsequent Q&A were additionally co-sponsored by the College of Arts, Social Sciences, and Humanities; the Division of Diversity and Inclusion; Multicultural Student Organizations Leadership Programs; and the Office of Multicultural Student Services.

The audience made up of primarily students but including faculty and staff and community members, sat silently as Tyler described the events that led to his incarceration. According to a 2007 New York Times op-ed, “Mr. Tyler, a sophomore at Destrehan High, was on a bus filled with black students that was attacked on Oct. 7, 1974, by a white mob enraged over school integration. A shot was fired and a 13-year-old white boy standing outside the bus collapsed, mortally wounded. Mr. Tyler was arrested on a charge of disturbing the peace after he talked back to a sheriff’s deputy.

Although the bus and its passengers were searched and no weapon was found, Mr. Tyler was taken into custody, savagely beaten, and accused of committing the murder. A gun was found during a subsequent search of the bus and witnesses were rounded up to testify against Mr. Tyler. It turned out that the gun (which has since disappeared) had been stolen from a firing range used by officers of the sheriff’s department. All of the witnesses who pinpointed Mr. Tyler would eventually recant, saying they had been terrorized into testifying falsely by the authorities.”

Tyler recalled having hope, even after being baselessly accused and physically beaten by authorities. “After all I went through, I still believed in the criminal justice system. I was taught to believe the criminal justice system was the best system in the world, that I needed to believe. My mother, my parents believed that. The truth will come out, you will be exonerated. I believed that. When I went to court, I was confident they would find me not guilty. “

Despite outcries from his family and community, Tyler was convicted. According to Free Gary Tyler’s website, “Gary’s trial lasted five days and the jury deliberation three hours before he was found guilty of first-degree murder, in November 1975. Under Louisiana law at the time, this was an automatic death sentence. His date of execution was set for May 1, 1976. At seventeen, he was the youngest person on death row in the United States.”

With Free Gary Tyler campaigns active around the nation and multiple pending appeals, Tyler’s execution date was postponed. Soon after, the U.S. Supreme Court ruled that the Louisiana death penalty was unconstitutional, and Tyler was spared from death—but re-sentenced to life in prison. Requests for parole, pardon, or a commuted sentence were all met with rejection.

Tyler weighed just 107 pounds and stood 4’7” tall at the time of his conviction. He recalled being awoken by screams in the first 72 hours at the prison, looking out the window to see a prisoner engulfed in flames, set alight by another prisoner.

Tyler was surrounded by convicted criminals. “Little did I know that the men who were around me had my interest at heart. When I walked into that prison, they didn’t see me as a threat. How could a small child—young enough to be your son, little brother, nephew, your friend’s son—come to prison with grown men?”

He then described how he was mentored and protected by some of these criminals, saying that they took him under their wing and taught him how to survive. “The same ones protected me and became my guardians, raised someone else’s child, and made sure he didn’t become a victim. They became my big brothers, uncles, mentors, everything.”

Tyler eventually saw a radical change in fellow inmates, recalling people who once hated him based on the color of his skin who grew to love him and, “became my best friends.”

Throughout his time in prison, Tyler pursued education. He was initially denied a request to obtain a GED based on his life sentence and told that, “it would be a waste of taxpayer money.” Tyler ended up reading all of the books he could get, joining clubs and organizations in prison, and taking any classes or rehab programs that were available. He became CPR certified, engaged in bereavement counseling training, studied graphic arts and printing, and attended paralegal school. He volunteered in the prisons’ hospice care facility for seventeen years. Most notably, he became the president of the drama club. Tyler credits drama club with empowering him to use his voice, lead, and inspire. Eventually, Tyler became well known for his ability to rehabilitate and inspire prisoners who had previously lost hope. “They grew to love me just as I grew to love them.”

According to Free Gary Tyler’s website “After enduring over four decades of incarceration, the St. Charles Parish District Attorney’s Office in Louisiana finally agreed to overturn Tyler’s conviction in 2016.

Tyler agreed to enter a guilty plea for manslaughter and received a maximum sentence of 21 years. Since he had already served more than twice that time, his sentence was overturned. Tyler was quietly released from Angola penitentiary on April 29, 2016.”

For more information about Gary Tyler’s life both before and after prison, readers may visit https://www.freegarytyler.com/.