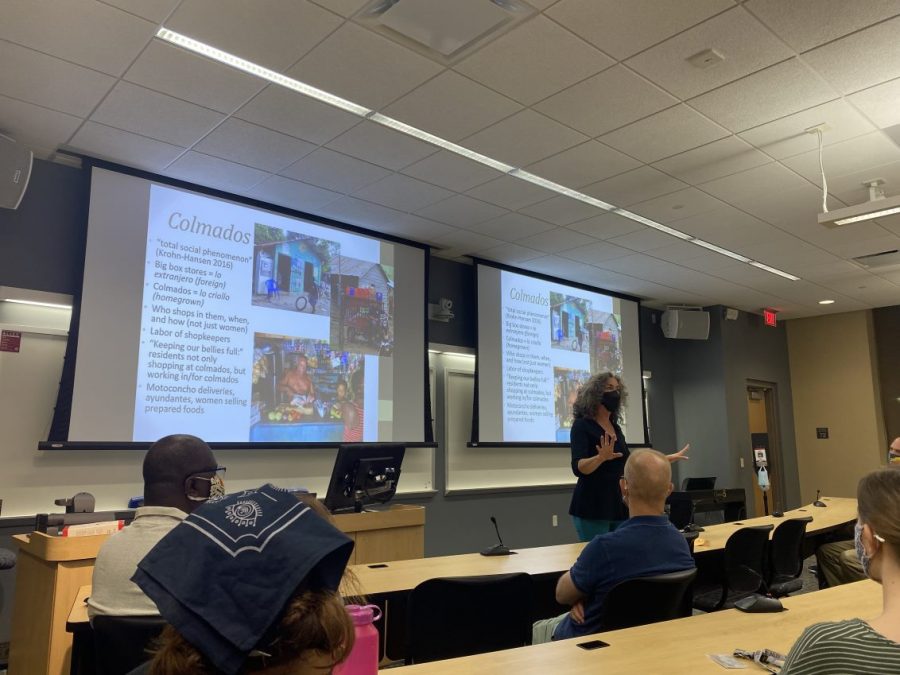 Photograph of professor Christine Hippert speaking about her book "Not Even a Grain of Rice" in Centennial Hall. Photo taken by Sophie Byrne.

“Not Even a Grain of Rice: Buying Food on Credit in the Dominican Republic” is the new book by University of Wisconsin-La Crosse anthropology and archaeology professor Dr. Christine Hippert. The book examines the cultural practice of buying food on credit from small corner stores (or ‘colmados’) in low-income urban communities, while also looking at race relations between Haitians and Dominicans.

On Wednesday, Sept. 29, Hippert spoke to a full lecture room in Centennial Hall, formally introducing her book for the first time since it was released in January 2021 (just before the start of the COVID-19 pandemic.)

According to Hippert, she’s, “…looking at food shopping to tell a story about how race and racism is changing in a tourist destination on the North Shore of the Dominican Republic.”

Hippert’s talk was introduced by Dr. Omar Granados, who is the chair of the Global Cultures & Languages Department as well as the Director of the Latin American and Latino Studies program. The talk was also sponsored in part by the Latin American Student Organization (or LASO) as part of UWL’s celebration of Hispanic Heritage Month, which runs from September 15th – October 15th nationally.

Hippert, a Boston area native, has been teaching at UWL since 2007 and is multilingual. Some of her areas of study include the anthropology of food, community development, and social construction, particularly in Latin America and the Caribbean. Hippert’s intended audience for the book was undergraduates. However, the book offers constructive insight for anyone interested in the intersection of food, poverty, race, language and cultural barriers, Latin American culture, and more topics.

Hippert’s research for “Not Even a Grain of Rice” draws on qualitative data and long-term fieldwork experience from the resort town of Cabarete in Dominican Republic. This research was conducted between 2011 and 2015. Hippert mainly studied two lower-income neighborhoods, or “slums” as she says they were self-described by residents, where resort employees live and raise their families.

“Really, my book is about culture change: about how things used to be and how things are changing, and what that change is doing for interpersonal relationships particularly between Dominicans and Haitians,” said Hippert.

When Dr. Hippert refers to “buying food on credit,” she doesn’t mean with a card or bank. Instead, credit is used in the more literal sense of “to trust.” The Spanish verb for this is “fiarse” and the conjugation simply meaning credit is “fiao.”

Under this system customers will come to the colmado, tell the owner or helper what they need (these are not full grocery stores, simply small buildings with counters behind which food and goods are safeguarded), and the cost of their goods will then be tallied up and added to a running tab that most customers keep with local colmado owners. Customers are expected to pay all or a portion of their tabs at loosely pre-determined intervals in the future. “People are buying food in Dominican Republic more often than not without money,” Hippert said. “Fiao is everywhere. It is part of the fabric of Dominican society.”

She explained, “People always repeat, ‘fiao gives me dignity. If it weren’t for fiao, my kids would starve,’ and people know that, so they say that fiao is all about being a dignified human being and is how they obtain their human rights.” She continued, “Fiao gives them the ability to take care of others. A lot of people talk about creating these relationships [of trust and credibility] as really hard work. For a lot of people that’s what fiao means, the morality of fiao is taking care of people and of hard work.”

On the other side of the coin, Hippert says that there are those who see fiao as restrictive.“Fiao is synonymous with perpetual indebtedness. They know that people have to use it, they gotta feed their kids, but they don’t like the system.”

According to Hippert, people of this mindset often express a desire for higher wages or lower food prices, which might decrease the need for fiao. “A lot of people talk about fiao as part of a colonial system. Colonialism was the perpetual exploitation of one group of people over another,” said Hippert.

As Hippert described, these fiao systems are entirely dependent on the small size of their communities. In order to have “credit” with a colmado owner, you must know them and convince them of your trustworthiness. If you’re deemed untrustworthy you must find a sponsor to vouch for you, or move along and find another colmado with which to do business.

According to general belief, Dominicans will sometimes refuse to do business with Haitians, who they are more suspicious of than fellow Dominicans. Much of this is due to complex historical context and colonization, as Hippert explained, but some is also due to the language barrier.

Haitians speak Haitian Creole and Dominicans speak Spanish. Although some of this discrimination does occur, Hippert also described seeing cooperation and camaraderie between Haitians and Dominicans, and Dominicans of Haitian descent. Hippert examines these occurrences and why they happen in further detail in the book.

“Not Even a Grain…” looks at many intricacies that Hippert observed in her research. Some of these are what makes a person trustworthy to receive credit, the implications of the tourist season on a town like Cabarete, the language barrier between Haitian Creole and Spanish, the different types of fiao and the reasons for them, the ways in which debt affect interpersonal and intercultural relationships, and even the distinction between the prefixes “inter” and “intra” when you’re looking through an anthropological lens.

To purchase a copy of “Not Even a Grain of Rice: Buying Food on Credit in the Dominican Republic,” or to read reviews, readers may visit the publisher’s website.