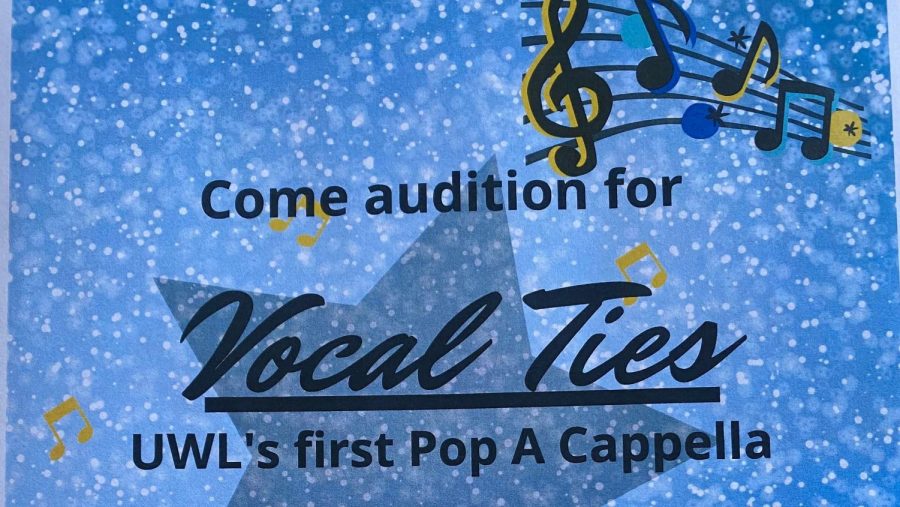 The University of Wisconsin-La Crosse has a new student organization for those who are looking to try their hands at singing without any instruments. Vocal Ties is a new acapella group led by sophomore Josh Piechowski and is currently the only acapella group on campus. Auditions for the group were held on Sept. 18 and 19 and there are currently 18 members. While the group is still in its beginning stages, they have a lot of things planned.

Piechowski said that he wanted to start the group last year but was unable to due to COVID-19. He said he was a freshman and a bit overwhelmed with starting a new group while adjusting to college life. He had joined choir in high school with some friends and discovered he really liked singing. Piechowski said, “We sang some Pentatonix in our [high school] choir and I found that I really liked their music…I was like ‘I want to sing Pentatonix with other people and I want to do acapella in college.’”

Piechowski explained that he saw a need for an acapella group on campus after talking to his brother, who attends school at the UW-Madison. “We don’t have any acapella groups and they [UW-Madison] have seven. We might as well have one, so I decided to make one.”

While auditions are closed for the semester, Piechowski said they would consider letting a few more members in. “We were shooting to have an even number of upper and lower voices so we would consider letting in two more baritone or bass voices.” Right now Vocal Ties is mostly freshmen and sophomores, so auditions won’t necessarily be held every semester, rather, they will be held whenever there are spots open. They want to keep the group around 20 members, with 10 higher ranges and 10 lower.

Piechowski said the most challenging part of forming a new group was figuring out all the red tape that he needed to go through. Creating bylaws, figuring out a meeting schedule, and finding an open space to rehearse, even finding songs, all proved to be difficult. Luckily he has friends who have experience starting student organizations and have been able to help guide him.

Now that the group is starting to come together, the next step is figuring out performances. Piechowski explained that he is hoping to do a concert or a performance during the semester. He is also considering a collaborative concert with the vocal jazz group or performing around campus.

Vocal Ties are also considering doing singing telegrams as a way to raise money. The concert choir used to do singing telegrams a few years ago, and they still get phone calls asking about it. Piechowski is hoping to start them back up again. “It’s a good way to raise money since we are a new student organization and we don’t have any funds. One person even suggested just like $5 to go to someone’s dorm to sing happy birthday, which would be a lot of fun.”

The group has only met once so far, to brainstorm ideas and get to know each other. Performance dates will be announced in the future.