“It’s a lot of pressure to do it right”: UWL students and faculty create original production, Severe Clear 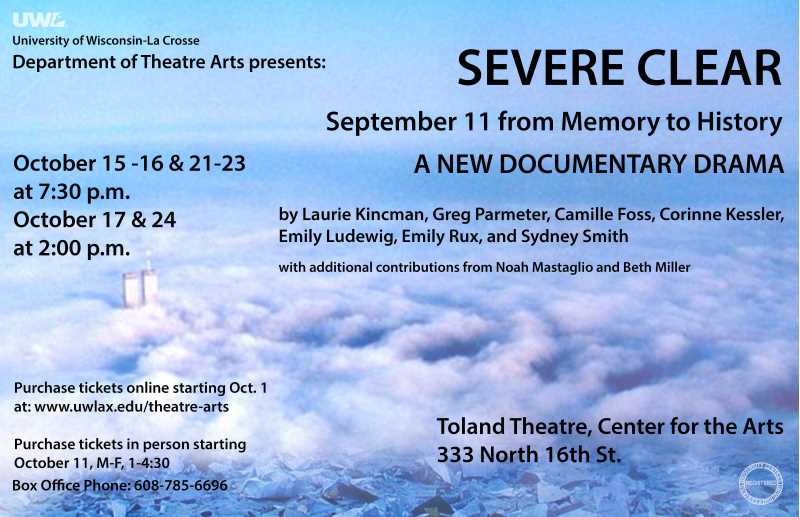 The University of Wisconsin- La Crosse’s theatre department is currently in rehearsal for their fall production Severe Clear, an original play written by students and faculty. The show uses first-hand testimony from people who experienced the September 11 tragedy to bring their stories to life and take viewers through the events of the day, from when the first tower was hit, to President George W. Bush reading to students when he learned of the events and the calls to loved ones from those aboard flight 93.

The idea of the show started two years ago when Associate Professor Laurie Kincman approached Assistant Professor Greg Parmeter with an idea for an original, documentary-style, play focusing on 9/11. Parmeter said, “[Kincman] approached me with the subject and her exact words to me were ‘you want to go down a rabbit hole?’ She explained in brief what she was thinking and it took me all about 30 seconds to say yes.”

The two decided to get students involved, and in fall 2020 they offered a new course titled “Creating Documentary Theatre.” Seven students registered and over the semester they created a rough and second draft of the show. Five of the students became so invested in the script that they continued the class in the spring of 2021 and finished a fourth draft of the script.

Over the summer Parmeter and Kincman worked to finalize the script and began the rehearsal process in September 2021.

Sophomore Kenadi Tossing is a theatre performance minor, and one of her characters is a woman named Genelle Guzman who was in the north tower when it fell and was the last survivor found the next day. Tossing said, “It’s a tough show, it’s a lot of pressure to do it right and give it the justice it deserves.” She also plays a flight attendant on flight 93 which was headed to the capitol but crashed in Pennsylvania. “It’s the toughest scene…everyone on that plane died so it’s hard, it’s scary…and there are voicemails that people on the plane left…it’s so intense.”

Jasmine Kratt is a fifth-year theatre performance major. She plays 23 different characters in the show and explained that being a part of an original production was a very exciting process, but also had its challenges. “The process of being in a new show does mean that, by design, it gets changed around sometimes… you’re saying lines in the early rehearsals that you’re not entirely sure will make it to the final production.”

There are 189 characters in the show and since each actor plays multiple roles, the costumes need to be simple enough to allow for quick changes yet be distinguishable to the audience. Most characters have a few simple items that are easily removed such as a hat or glasses, which will help the audience follow the different roles. “The costumes will help the audience be like ‘oh that’s the same person from before, that’s someone I should listen for,’” said Tossing.

The cast had a few UWL faculty who experienced 9/11 firsthand come into rehearsal and talk about their experiences. Two were in New York and saw the towers fall, and one was at the Pentagon when the plane hit. Parmeter said, “Listening to them talk about their experiences really did drive home that everybody has a different perspective and we wanted to be respectful to all of those that were involved so that one voice and one interpretation of events didn’t become the truth or the fact.”

Severe Clear is an important show for people of all ages to see, but specifically students who might not remember the events of that day.  Kratt emphasized the importance of students coming to the show saying, “I think this show is an essential one for people our age to come and see. A lot of young adults were really little kids or weren’t born yet and didn’t experience 9/11 the same way as some older adults….it’s something that has felt so impersonal when we learn about it in school and this is a way to see it face-to-face in a much more human way.”

Kratt also had a message for audience members, “I hope that everyone who sees the show knows it’s okay to laugh…cause we did too.. and it’s okay to cry. We definitely did that as well,” he said.

Severe Clear opens on Sept. 15 and runs through Sept. 24. Tickets can be purchased through the box office either in person or over the phone by calling 608-785-6696. Masks will be required for entry.