“The biggest goal was to run as a team”: UWL Men’s Cross-Country finish first at home meet 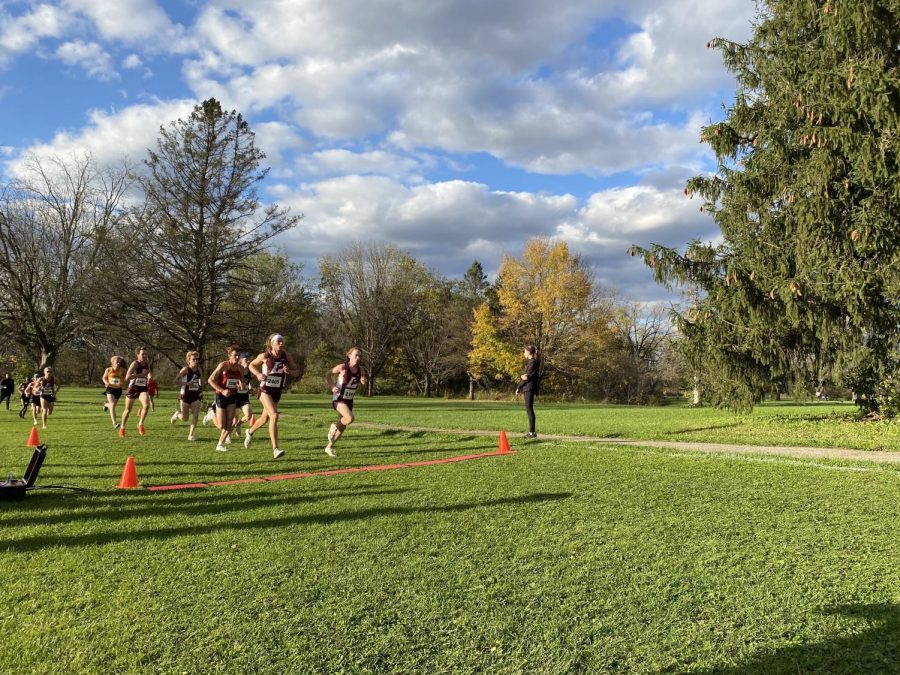 On Oct. 15 the University of Wisconsin-La Crosse won their 40th annual home meet, The Jim Drews Invitational. This is the team’s tenth first-place finish. This is also the first time in many years that they are competing at Maple Grove Venues located just outside of West Salem, Wisconsin. In previous years the meet was held at Ettrick Golf Club in Ettrick, Wisconsin.

UWL had five runners in the top 25 list in the state Ethan Gregg (3), Isaac Wegner (8), Ethan Thompson (11), Chad Franz (18), and Parker Huhn (22). A cross country meet is scored by adding up your five best finishers’ places and the team with the lowest total score wins. The Eagles scored 60 points while that doesn’t add up if your team doesn’t have at least five scorers you will not get scored for a team result. Iowa Central finished second with a score of 67. Eau-Claire was third with 89 points.

“Pack mentality,” UWL junior Ethan Gregg said about the plan for the race. “The biggest goal was to run as a team. Everything else came secondary,” said UWL junior Isaac Wegner. Even though they knew they had the talent to win that race they wanted to keep the pack for as long as possible. “To go out and actually do it and then win the meet and we ran very well individually, it was awesome to see,” said Wegner.

“Being at Maple Grove had a better experience for the fans I could definitely tell there were a lot more people,” said UWL senior Ethan Thompson. “Seeing everyone multiple times on the course was awesome,” Anderson said about how accessible it was for the fans to watch the runners. “It felt more like a home course, Ettrick was over 40 minutes away and this was only 15 minutes,” said Wegner about the differences between Ettrick Golf Club and Maple Grove Venues.

“Being more youthful we have had to be more patient on our ability to come together as one,” said Thompson referring to the much younger team than the Eagles have had in the past. Thompson said he is the only senior on the roster. The team is not worried about being on the younger side. Thompson said, “With that patience, people have learned what they need to do individually to help this team succeed.”

When asked about the team’s upcoming conference race, Gregg said, “Compete and do the best we can to hopefully come away with the win.” The Wisconsin Intercollegiate Athletic Conference cross country meet is scheduled for Oct. 30. When asked about goals past conference heading into the national meet they said they are not thinking that far ahead, they are all focused on “one day at a time.”