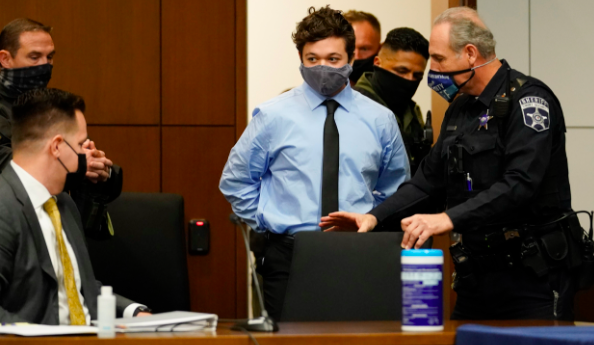 On Nov. 22, 2021, the University of Wisconsin-La Crosse Student Association Executives sent out an email to the entire student body regarding the decision in the Rittenhouse trial. In the first paragraph of the email, the Executives said, “We stand in stark opposition to white nationalism and the killings that follow it. Black and Brown people across this country should not be targeted and subjected to excessive brutality and violence.” In elaboration regarding the brokenness of the United States’ Justice System, the Executives said, “The idea that our criminal justice system is so broken as to allow racist acts of violence to go unpunished is shameful.”

The Executives also discussed their commitment to providing a safe, equitable, and welcoming environment at UWL while they also said, “[they] strongly condemn the actions of Kyle Rittenhouse, despite the court ruling on Nov. 19, 2021.” They concluded their email and said, “White supremacy has no place on our campus, in our communities, or anywhere else in Wisconsin.”

In response to community and campus conversation regarding the email from Student Association, Chancellor Joe Gow released a statement regarding the email from Student Association on Nov. 24. Chancellor Gow began his email by establishing that UWL is committed to shared governances, and it would not be appropriate for the UWL administration to sensor statements issued by student organizations.

In the chancellor’s email, he referenced the UW system’s Commitment to Academic Freedom and Freedom of Expression and said, “Every member of our campus community has the right to speak out in response to ideas they find offensive or harmful. No person is ever exempt from being criticized, but disagreement must be conducted without harassment, intimidation, disruption of learning or other university activities, and discrimination.” While Chancellor Gow established his support for free speech, his email also established that the views of students are not reflective of the university or any of its policies. To conclude his email, Chancellor Gow thanked the student body for being active participants in an important debate.

In response to the Student Association email, the UWL College Republicans released a statement titled, “Response to the Waukesha Terrorist Attack and Student Association plus Meeting Details (11/30/2021).” In the statement, released Nov. 30, the organization discussed the Waukesha parade attack and said, “Make no mistake about this incident, this was not a ‘parade crash’ as the media reports, this was a left-wing terrorist attack in response to the Kyle Rittenhouse verdict.”

The email detailed the organization’s thoughts regarding the Rittenhouse trial as well as written the media’s role in covering the Waukesha Parade incident in a poor light, as well as blaming the incident on a “BLM militant”.

With the email from the College Republicans accrediting the violence of the Waukesha Parade to the decision in the Rittenhouse trial, many similarities can be found between a press release by Florida Governor Ron DeSantis of the Republican Party. In the statement, DeSantis said, “So let’s just be clear. They are not wanting to cover this Wisconsin thing for what it is. They are not wanting the facts to come out the way they are because the facts do not support their narrative. And it’s all about pursuing partisan narratives.” The Governor then said, “We will see what the actual motivation was. Very well may have been in response to what happened with Kyle Rittenhouse. And you have to wonder if that’s the case, almost assuredly this guy’s view of Rittenhouse was colored by all these media lies.”

Though the safety and wellbeing of an entire race and community are not political, both the Governor of Florida as well as many Republicans believe that these statements regarding the relationship between the attacks of the Waukesha parade and the Rittenhouse trial are true. According to the right-leaning news source, Support, by Drew Berquist, “BLM LEADER CONFIRMS, WAUKESHA WAS REVENGE FOR RITTENHOUSE”. However, these statements are false, the aforementioned story notes that. “No connection has been found between the attack and the not guilty verdict in the Kyle Rittenhouse trial.”

In elaboration to the details of the email, the College Republicans also went on to argue that though racial injustice is happening around the world, it is also happening in our backyard. The email went on to call out student association for what the College Republicans argued is injustice. The College Republicans said, “Although we cannot change what happened in the past, we can learn from it. The university would go a long way by treating every individual as just that, an individual. Teaching students to see themselves primarily by their group identification (gender, race, class e.g.) only causes more hatred. We can learn about our differences without resentment politics.” The organization called for the complete desegregation of the Student Association, arguing that the UWL campus has racially-based clubs.

Nevertheless, these “racial-based” clubs accept all members and quite simply celebrate the culture and history of many diverse nations. According to the Recognition of Student Organizations, produced by the board of regents, racially based organizations are not prohibited as long as no student is excluded from membership.

The College Republicans went on and said, “These clubs get funding from Student Association and get to appoint a senator that you don’t get to vote for.” And that, according to the Guidelines for Student Governance, in the UW system, “Students shall have the right to select their representatives to participate in institutional governance, which means that students may choose the students who will be appointed by appropriate authorities to participate in institutional and faculty committees as determined by institutional policies and procedures and in accordance with the interpretation of the statute by the Wisconsin Courts.”

The organization also said, “No other clubs get any of these privileges. This means that according to student association bylaws, 30% of votes in Student Senate come from people that were not voted in.” Though the organization referenced Student Association Bylaws, they do not address ARTICLE IV, Section 3.103, in which there is a rotating senate seat that can be given to applicants of other organizations who wish to be a part of the senate. They also do not acknowledge the fact that the same section provides seats for Fraternity and Sorority Life, as well as for athletics.

In response to the email, College Democrats Vice President Ryan Sperling issued a statement to The Racquet Press. Sperling said;

“The UWL College Democrats are dismayed by the College Republicans’ response to the statement issued by the executive leadership of UWL Student Association. The College Republicans complain that scapegoating has caused the recent tragedy which occurred in Waukesha. And yet, they begin that very statement by alleging that the killings were a “left-wing terrorist attack” by “a BLM militant.” Disregarding the fact that there is scant evidence backing up those allegations, they are participating in the same sort of scapegoating that they claim to condemn.

The bottom line is that the killings committed by Darrell Brooks and Kyle Rittenhouse are tragedies that have torn apart families and communities from all ends of the political spectrum. They are also unrelated incidents, from what evidence is available given the recency of the Waukesha incident. Kyle Rittenhouse has been given due process via a trial by jury. Darrell Brooks, on the other hand, has had no trial, testimony, or jury decision as of the time of this writing. It is completely unreasonable to expect Student Association to lump a weeks-old mass-murder– which an entire community is still mourning from, and which officials are still investigating–into a statement that aims to support POC in our community and repudiates the verdict of an unrelated case.

The College Republicans claim that only multicultural student organizations get their own Senate seat, which is plainly untrue. Why would they omit the fact that Greek Life and Student Athletics have senate seats?  They make no mention of removing those seats, centering solely on disenfranchising the organizations involving race and ethnicity. How can they claim that “desegregating” Student Association is their goal while pushing for the complete removal of the few voices of color in Senate?”