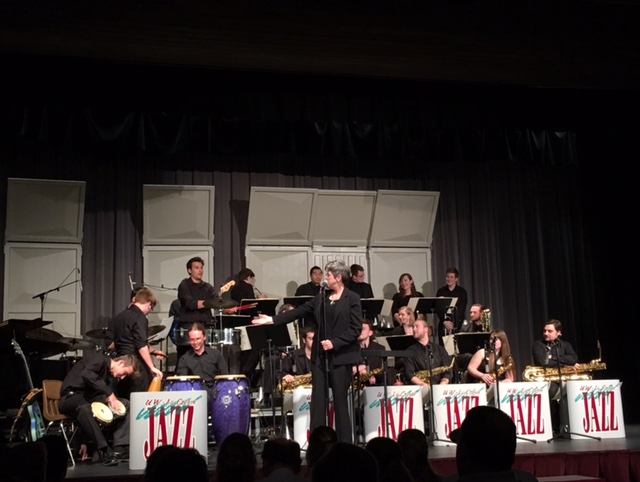 The UWL Jazz bands livened up the Cartwright Center with contemporary jazz tunes, and a bevy of different styles of music. Lively directed by Ms. Karyn Quinn both the Jazz Ensemble and the Jazz Orchestra performed for a packed Valhalla on the night of Thursday, April 21. Both bands performed various jazz tunes ranging from upbeat Latin songs like “Uno Mass” to more rhythmic and laid-back pieces like “Funky Wheels.”

UWL students were excited for the performance before the show. “I love the energy that is in the Jazz band’s music,” UWL student Abby Greiten said prior to the performance.  “It can be slow and beautiful or it can be fun and crazy, like Uno Mass,” said Greiten. The range that these two bands can produce is impressive to UWL students.

Director Karyn Quinn started the show off to a smooth start, giving no introduction other than a quiet 1,2,3,4. With that count, the Ensemble’s portion of the concert began with their rendition of “Red Rocket.” After they finished up with this piece Quinn took the microphone for a chance to thank the crowd for showing their support, to crack a couple jokes, and to give an intro to their second song, “Children of the Night.”

Between songs, Quinn told the audience about the bands excitement for this concert due to the song selection featuring many more upbeat tempos than their previous performances. Member of the rhythm section for the ensemble, Kieran Young talked about how he gets prepared for a more funky and upbeat selection of songs. “Mainly I listen to more funky and upbeat music to get into that kind of groove,” Young said, “Another drummer and I will sit and jam in the different styles we will be playing for the concert, just to get our groove on.” With such funky rhythms, Young likes to surround himself with the same type of music that he will be playing.

Students appreciated the variation that came along with different songs. “The most memorable part was when one of the musicians played the claves,” said UWL student JJ Simons, “He usually plays the bass so seeing him smiling while tapping 2 wooden sticks together was awesome.” The variation of the instruments impressed UWL students.

“Uno Mass” was not the only innovative song; each piece brought something unique to the concert. The selected songs featured different solo’s giving performers their chance to wow the crowd with their craft. These songs called for new sounds, allowing the performer’s to use different types of mutes to give their instruments the sound the song required.

Different songs even called for rotating performers around instruments in the rhythm section. Young elaborated on the rotation between performers. “It is really just to rotate around,” said Young, “We decide what songs we want to play on, so someone might choose a song they are better at playing.” Rotating the rhythm section allows performers to utilize their talents to the maximum.