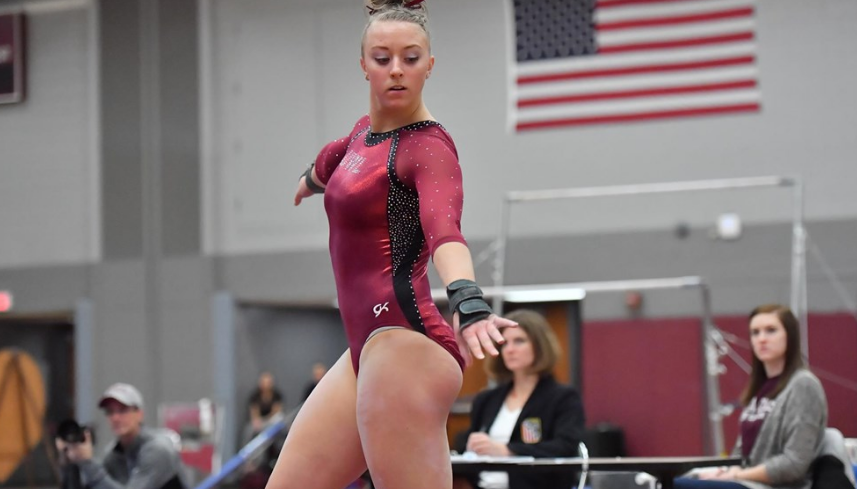 UW-L Junior Samantha Wiekamp collected the all-around title with a 37.500 and came in second on beam with 9.525. Wiekamp tied with teammate Dani Barmore for first, both earning 9.575, on bars. UW-L’s Monique Muehlethaler came in third on bars, capturing a 9.550. UW-L’s Amy Enright followed by tying in fourth on bars with 9.500.

UW-L’s Savannah Farrell, Leah Spankowski and Barmore all tied for third on vault with 9.525.

“We are definitely showing some good fight and that we have a lot of talent on this team,” explained UW-L Senior Kari Willett. Last season, the Eagles’ brought home their 16th NCGA National Team Championship. The team is working toward a repeated performance at the National Championships in March. “We are capable of so much. I am so excited for what this team is going to be able to accomplish this season.”

When asked what makes this team special, assistant coach, Ali Berry stated, “The family feeling. How they have each other’s backs and they have so much energy and so much fight. You can just tell that they want this,” Berry was a competitor for the 2016 national champion squad. “This energy and fight was shown again and again throughout the meet. It is clear that this team is a family who will unconditionally support one another.”

Throughout the evening, the Eagles’ team spirit was apparent. During various routines, non-competing teammates would line up along the mat and cheer after each successful skill.

“Even if you fall four times, your teammates are going to be there giving you high-fives and tell you ‘Hey, good job. You fought. You finished.’ Which gives you a level of confidence,” proclaimed Willett.

The Eagles’ will go on to compete against Illinois State University on Sunday, Feb. 19.