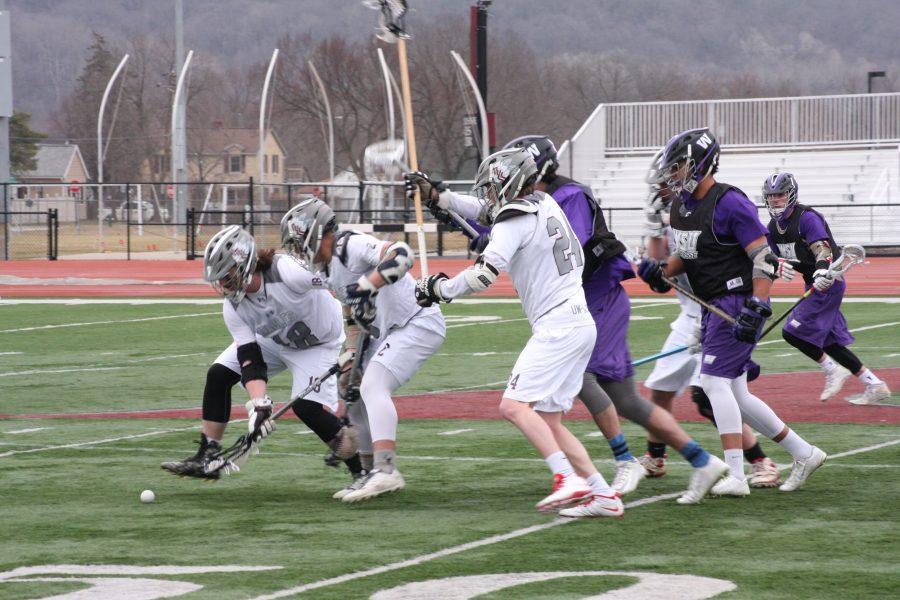 The UW-L Men's Lacrosse team fights for possession against Winona

It was a cold, windy afternoon, but the teams were ready to compete despite the weather.

Both teams were well-supported by their blanket-wrapped fans. These supporters enthusiastically cheered them on from the bleachers while the teams aggressively battled for the win.

“We’re really blessed to have a good coach and such good guys on our team,” stated Vitrano.

Vitrano, one of the team’s long stick midfielders, spoke highly of his teammates.

As club team, the Lacrosse club receives some funds from student fees but not enough to cover the team’s expenses. That means on top of practice twice a week and weekly tournaments, the team engages in fundraising to pay their team dues.

Such efforts have raised over $6,000 this season. The money funds uniforms, registration fees, and travel expenses.

“Team meetings get a little off topic because everyone’s just fun to be around,” Vitrano noted, “We all hang out after practice. Most of the people I’ve met through the lacrosse team are my friends now. They have a lot of personality and character. Practice is never dull.”

“All the players [make this team special]. They’re students first, but they like to come have fun, they’ve been playing this sport for a long time and after a while they all just become good friends,” reiterated Dahmen.

“Joe has done a wonderful job, he’s a natural leader and we see eye to eye on a lot of things,” said Dahmen of his team’s President.

“The team has been practicing since fall but this tournament marks the start of our competitive season,” explained UW-L Men’s Lacrosse Club Assistant Coach and UW-L alumni Kyle Dahmen.

Vitrano also added a comment about his freshmen experience on the team. “My freshmen year was probably the best time for me to play lacrosse just because I met so many people right away.”

The team’s next tournament is this coming Saturday, April 1, at UW-Platteville.