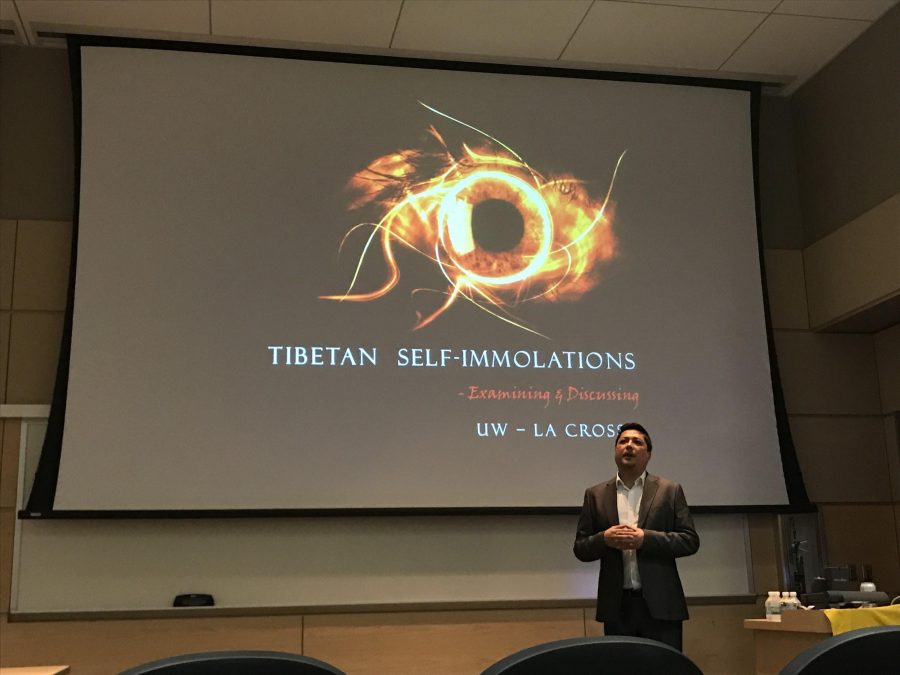 On Wednesday March 29, people filed into Centennial to hear keynote speaker Tibetan activist Jigme Ugen speak on the oppression of Tibet and more specifically, the use of self-immolation to protest.

Self-immolation is publicly setting oneself on fire in an act of protest.  Over 154 people have self-immolated in response to Tibet’s oppression.

“I think that’s heartbreaking that they’re under so much oppression that this is something that they resort to have their voices heard,” explained Emma Fischer the Students for Free Tibet Fundraising Executive, “Having said that, [Ugen] did a wonderful job in being their voice because a lot of people don’t even know this is happening.”

“A lot of us here are wondering why they self-immolate, it’s such a painful thing to do.”

Ugen said during the speech, “What they’re looking for to achieve is being the voice for the Tibetans.”

Tibet has been under Chinese occupation since 1959. In the 58 years of control, Tibetans have had much taken away from them.

A few examples of the extreme oppression Tibetans live under are: they will be jailed if found with a picture of the Dalai Lama, the religious figurehead for Buddhism, or the Tibetan flag in their possession. They also have extremely limited communication with places outside of Tibet.  “Those who took the pictures of the protesters self-immolating needed to drive several hours to get enough signal to send them to the rest of the world,” reflected Ugen “A lot of risks were taken for us to see these.”

“For [Ugen] to be able to come here and share this information and share these heartbreaking stories I think is really important because they didn’t die for nothing,” stated Fischer,

“We need to hear their stories and hear what they have to say even after their passing.”

Ugen explained that many Tibetans are currently displaced due to them fleeing oppression, but this does not stop them from giving up on Tibet.

“That is the legacy we carry as Tibetans; as refugees. We are ambassadors for freedom.”

Ugen iterated the importance of knowing the power of the consumer. “Make an effort; pick up a shirt-if it’s made in China, pick out a different shirt.”

After being asked how the issues in Tibet relate back to UW-L, Fischer explained, “Because we are all interconnected human beings. If something happens to one of us, it happens to all of us. There’s no such thing as independence when it comes to humans. When these things are happening to Tibetans across the world, they affect us here.”

Ugen’s final message of the evening was, “Hopefully, as peers across the other part of the world, you’ll do a little part for Tibet. Keep that in mind.”