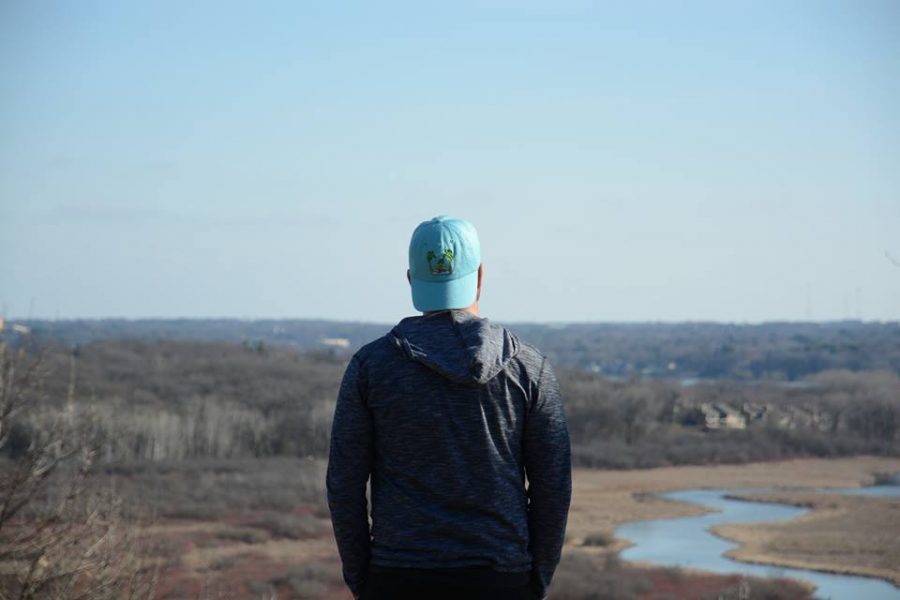 UWL freshman, Christian Anderson, is majoring in Marketing, loves spending time with his friends, and his top song on Spotify has been listened to over 24,000 times.

Anderson noted, “One of the hardest debates, as an artist, is: what’s your name gonna be?” Anderson makes music under the name of Trust’N.

Anderson explained how he created the pseudonym. “One of the big things of my life is just dealing with trust. I had a lot of trust issues because, as a kid, I was picked on a lot. So, with the word ‘trust’, I just tried to work on that.”

Anderson discussed his early musical training. “Maybe around five or six years of age, I started playing piano and I absolutely hated it.” Anderson also played trumpet throughout his earlier schooling. While trumpet and piano lessons didn’t inspire Anderson, Hip-Hop stuck with him.

“The first time I ever, really, started doing my own thing in music was when I was, maybe 14 or 15. I just started rapping along with my friends in the car. We’d do freestyles and try to burn each other,” Anderson recalled. “They told me, ‘Dude, you’re actually not bad at that’.”

Anderson added, “I just decided from there that I might as well try to make something into a song.”

After being encouraged by his friends, Anderson decided to record his first song. Anderson laughed and recalled, “It was really bad.”

Anderson worked on his music and eventually released a full, five song EP. “Then I started getting into marketing my music.” Anderson uploaded his work to SoundCloud and other online platforms. “As I got better, I started submitting my music to big websites to get reposted. As that went on, I met with some labels.”

Despite meeting with labels, Anderson has not signed with anyone. Anderson explained, “I love being an independent artist. The first reason is, I can put whatever I want out to my listeners, so there’s no filter with what I tell them.”

Anderson went on to say that the filter isn’t needed for explicit content. “I like to keep stuff clean, so it can be relatable to anyone. I’d rather create my own image and be my own entrepreneur, make my own sounds.”

“I’m constantly telling my listeners, ‘You can do music, too.’ We can all make music and it’s something to explore.”

Trust’N also wants his music to help his audience, “I…talk about addiction to drugs, things like that, because that was definitely something that I struggled with for quite a while. And getting through that and knowing that there are people that can help you.”

Anderson explained the meaning behind the album’s name. “So, Wolf Pack is, like, what I call my friend group. Like, guys who have always been there for me.” Anderson went on to say, “They’ve influenced me a lot and a lot of them are, like, performers on my album. And, as far as that goes, that’s just about just really living life with them; that’s about their issues, that’s about issues that I face.”

“On this, upcoming album, a big [issue] I discuss is suicide.” Anderson spoke about a song, on the new Album, ‘Suicide Hotline’. He described the piece as, “…me and the person I’m featuring on it, talking about how we used to have negative thoughts and that was something that was very real to us.”

There is one place that both Anderson and has music have found a home in. Anderson stated, “[The show] that I most recently played was just one at my friend’s church.” Anderson detailed more about the event. “We just threw like a little party, like a little concert there. Like, 100 to 120 people were there, like it wasn’t anything like super promoted, but it was super fun.”

Anderson talked about how religion influences both his music and his listeners. “A big part of my music is my faith, my personal faith. Personally, I’m a Christian and I love to express that. [I] don’t have a lot of songs that are all about that, but you’ll hear it, like, woven into the lyrics.” As for his audience, Anderson said, “I know I’ve influenced a lot of people that way. Like, listeners to come to church or come to youth group and that’s been really fun.”