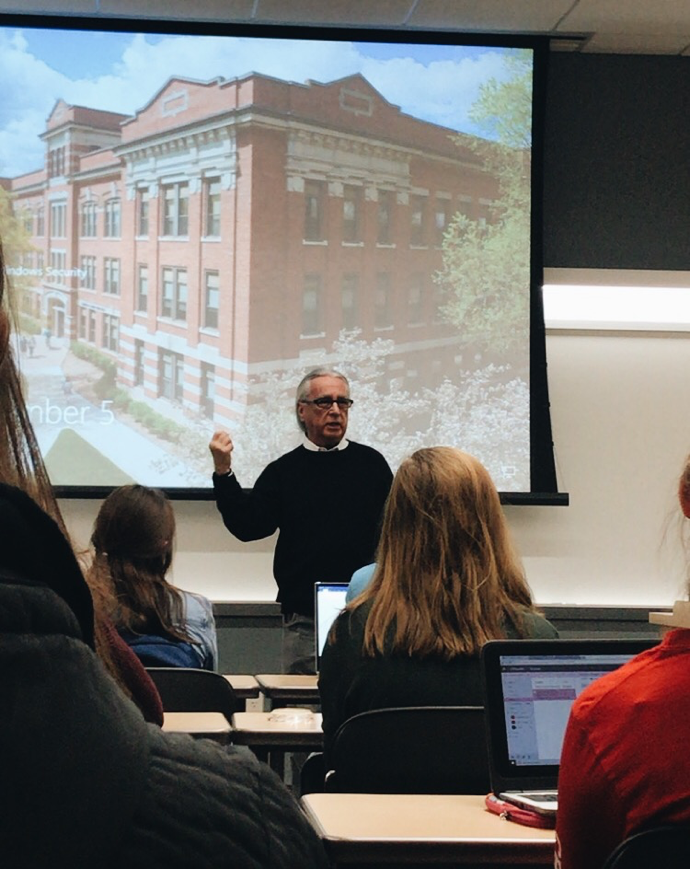 On Dec. 5 George Mendez took the spotlight in Centennial Hall. He smiled at the crowd and pretended to ponder their thoughts aloud, saying, “What is this old guy gonna tell me?”

Mendez launched his talk by discussing the course of his life. Mendez noted that, even from a very young age, he was fascinated by television. It was while he was in college that he worked for a radio station and wanted to be a disc jockey. Then, one day, he fell down a flight of stairs.

According to Mendez, his doctors told him to, “Kiss college goodbye”. This fall led him to drop out of school because he needed to recover from surgery on his back. Then, an opportunity arose. One day, he was playing pool in his friend’s basement when their father told Mendez he’d heard he’d recently had some bad luck. Mendez’s friend’s father then offered him a job at NBC.

Mendez turned to the crowd and said, “Always be open to any opportunity that comes to you. Many times in my life, things have changed, drastically.”

Mendez went on to say that his parents and grandparents had not been given the opportunities that he had. Mendez said, his Irish relatives recalled seeing signs for jobs posted that stated, “Irish need not apply”.

Mendez recalled his work at NBC, “I was always in management and management is just hard.” Mendez left NBC for some time and lived in Hawaii. He came back because of an opportunity. Mendez said, “This opportunity became the rest of my life.” He became the stage manager and described his job as helping others, “materialize their dreams.”

At the beginning of his career at NBC, Mendez shared that a man who ran the elevator told him that he’d go far in the company. After Mendez asked him how he knew that, the man responded, “You say hello to everyone, [from] presidents [to] janitors.”

Mendez stated that he conducted his work with this philosophy: “Everybody makes it work.” Mendez made time to get to know all the departments, from makeup to the people who write the cue cards. “I made every person feel like they were a part of the whole deal,” Mendez added.

Mendez name-dropped a few celebrities he had worked with in the past. He explained that Tina Turner once gave him a signed picture and it now hangs in his office alongside his Emmys.

Mendez ended with a hopeful message to the students in the room. Mendez stated, “I believe in you. You’re the ones that are gonna write the generation of tomorrow. I’m here because I believe in you.”

UWL Sophomore Hayley Meyer reflected on Mendez’s talk. She said that she liked him and that she “wrote down how he treated everyone the same”. Meyer believed that that was important to remember.