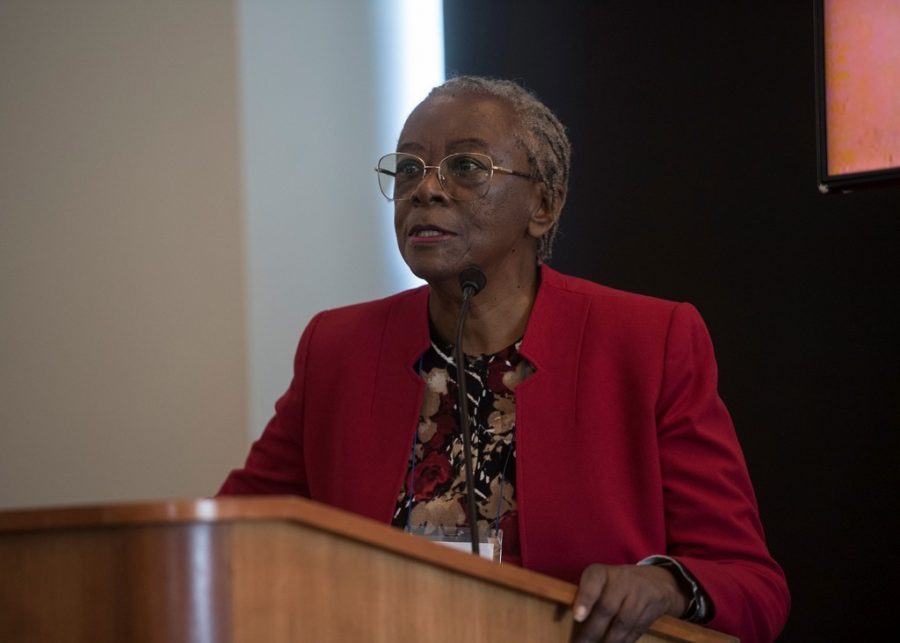 On the evening of Feb. 22 at the University of Wisconsin-La Crosse, Dr. Janet E. Helms of Boston College began her talk by stating that in this country we all think of race wrong. Helms is the author of four books, dozens of empirical and theoretical articles, and has accumulated numerous award for her work. “We don’t have a language for it,” Helms said. “Race is defined by law and custom in our country.”

Helms launched into discussing white heterosexual male privilege, which she abbreviated to WHMP and pronounced like the word ‘wimp’. “All of the institutions are designed to protect white, straight males,” explained Helms. While she notes that there are white men who will argue that they’ve struggled with various issues such as poverty or homelessness,  Helms asserts that not all WHMP’s are Alpha WHMP’s.

The Alpha WHMP’s are the ones who have much of the power in the United States. Helms provided an example about recent events. “The politicians who will not act in gun control are the ones being funded by Alpha WHMP’s”. To be a WHMP, Helms stated that you don’t necessarily need to be ethnically white, rather “…if people look at you and think you’re white, you’re probably white.”

“All “-isms” protect WHMP’s.” The “-isms”, such as racism, “are symptoms of white, male privilege. They keep the rest of us from uniting.” Helms said, “If you want to have a conversation about racism, you have to know the types.” The types of racism Helms identified were institutional, interpersonal, and intrapersonal.

Helms also introduced the idea of schemas. Schemas are the “…eyeglasses we use to view race.” The first schema presented was Contact, otherwise known as the “Happy Racist”. These people are satisfied with the racial status quo, oblivious to the way they benefit from racism, and, “minimizes or is unaware of racial differences in the ways that people are treated.”

The next schema is known as Disintegration, or “Rescue Me” as Helms put it. This schema is accompanied by feeling, “anxious and guilt-ridden when race is a concern.” and awareness, “that one can be kicked out of the white group for improper race-related behavior.”

Reintegration, “Ordinary Racism”, is the following schema. It consists of intolerance towards people of color, “and white liberals”, “idealization of the white group”, and “denies the existence of racism in any form”. These people also use their idea of what it means to be, “White to define the standard of what is good, moral, and socially desirable.”

Pseudo-Independence is the following schema. “White Liberals” is another name for this schema. These people can, “articulate principles of racial fairness, but not live by them”, depends on people of color to reveal is they’re racist or not, and assumes people of color are experts on racism. To this latter aspect, Helms commented, “The power for deciding who is or isn’t racist should not be in the victim’s hands.”

The next two schemas are, as Helms put it, “beating up racism.” Immersion Emersion is known as the “Caped Crusader”. These people attempt to re-educate other white people, “To help them understand racism at a personal level, too.” Individuals in this schema typically ostracized and comments, such as, “There they go again”, are used to put them down. Autonomy is the final schema, which is also known as the “Humanist”. They, “actively deconstruct racism” and they, “understand that internalizing a counter-racist identity is an ongoing process.”

These people also have to ask, as Helms said, “How do I think of myself as a racial being?”Helms noted that many white people have shame for being white because it’s associated with Nazis and other racist groups. However, Helms said, “There are other ways to be white.” Helms said that if you allow those groups to define what it means to be white, you give them power. “What you give power, defines who you are.” Helms added.

UWL sophomore Jessica Wener reacted to the presentation. “It was very cool. It was like explaining sociology in psychology terms.”