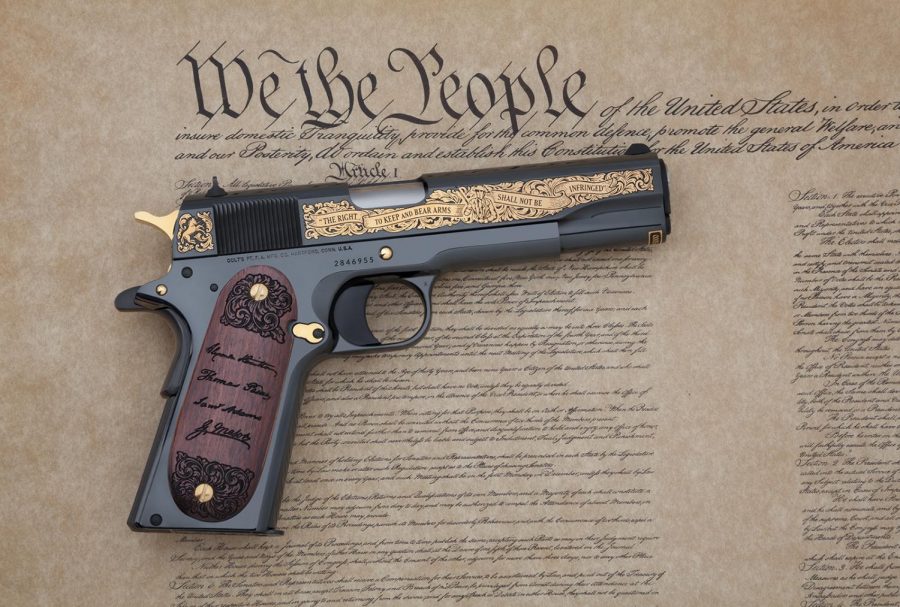 Growing up in the Midwest has its perks – unreal quantities of cheese, all four seasons, the best higher education programs and amazing cities. Yet, there are a few drawbacks to one state in particular – Wisconsin. Wisconsin is the 50/50 state. We are a swing state.

Wisconsin has voted ‘blue’ up until the last presidential election when they turned ‘red.’  Some say this is because of Governor Walker and Speaker of the House Paul Ryan’s close ties to capitol hill and their own home state. To be frank, Wisconsin usually cannot make their mind up in most situations.

I mention this theory because of the relationship Wisconsin has with the Second Amendment, 34.7 percent of Wisconsin citizens own at least one gun (CBS). The United States has seen a tragic amount of school shootings and things are not getting better, this is obvious. Despite the facts, I have had many conversations with peers at the University of Wisconsin – La Crosse campus who argue for the sake of our Second Amendment. More times than not I will hear someone claim, “You can’t take our guns! That goes against the Second Amendment.” Although I see the truthfulness in this statement, I see more manipulation.

On the other hand, some students I discuss this issue with claim that there should have been harsher gun restrictions in place years ago. This argument is split on the UWL campus and even more-so statewide. If we decide to argue that our Second Amendment rights are being threatened, then it is time to decipher what exactly this amendment is, one that we idolize more than the lives of our youth.

The Second Amendment states, “A well-regulated Militia, being necessary to the security of a free State, the right of the people to keep and bear Arms, shall not be infringed.”

This document, written in an era where a musket could be fired two to three times per minute if operated perfectly, could never imagine the gun that Nicholas Cruz used in the Parkland High School shooting which had a rate of fire of about 600 rounds per minute, if used correctly (CBS).

James Madison was the man to propose the Second Amendment on June 8, 1789. According to Politico Magazine, Madison did not care as much about individual rights of guns as much as gun extremists may believe, “There is not a single word about an individual right to a gun for self-defense or recreation in Madison’s notes from the Constitutional Convention. Nor was it mentioned, with a few scattered expectations, in the records of the ratification debates in the states. Nor did the U.S House of Representatives discuss the topic as it marked up the Bill of Rights.”

Madison added this amendment because of the militia, and the House of Representatives stood by it when they added, “A well-regulated militate is composed of a body of people” (Politico).

State militias soon dissolved, and for two centuries, post-amendment, many individuals had guns. There was a catch though – there were gun laws in towns and states that controlled everything including where gunpowder could be stored and who could carry a weapon. Courts overwhelmingly upheld these restrictions (Politico).

What many people are not aware of is that four times between 1876 and 1939, “…the U.S Supreme Court declined to rule that the Second Amendment protected individual gun ownership outside the context of the militia” (Politico).

We have not always been this obsessed with guns. This is proof that America knew guns were dangerous long before we claimed to. These state and town laws were abided by for many years until the National Rifle Association came into play.

The NRA rewrote the Second Amendment. It was not until the NRA supported so many of our capitalist agendas that we even deemed guns important. In 1975 Ronald Regan had an interview in Guns & Ammo magazine where he stated, “The Second Amendment is clear, or ought to be. It tappers to leave little if any leeway for the gun control advocate” (Politico).

Soon after Regan was elected, the GOP claimed, “We believe the right of citizens to keep and bear arms must be preserved accordingly, we oppose federal registration of firearms” (Politico). This was the year that the NRA bestowed their very first presidential endorsement to gun-loving Regan and somehow the NRA entered the political sphere as a main contender.

The Parkland shooting could have happened in Wisconsin just as easily as it could have happened in Florida. Madison State Journal quoted, “Comparisons of Wisconsin’s and Florida’s gun laws compiled by the National Rifle Association also show Wisconsin is more lenient in some areas. Florida, for instance, has a three-day waiting period for purchasing handguns. Wisconsin’s Republican governor and Republican-controlled Legislature ended the state’s two-day waiting period in 2015.” Since the year 2012, Governor Scott Walker has received $12,500 from NRA, and in 2015 Walker signed two laws to loosen gun laws in Wisconsin (CBS).

We created loose laws in our beloved states and re-elected officials that took thousands of dollars from the NRA. We allowed our people to love the weapons they had easy access to. Americans did not always love guns, we taught them to. We taught them to wish for a gun for their birthday, and to wish for the power to kill.