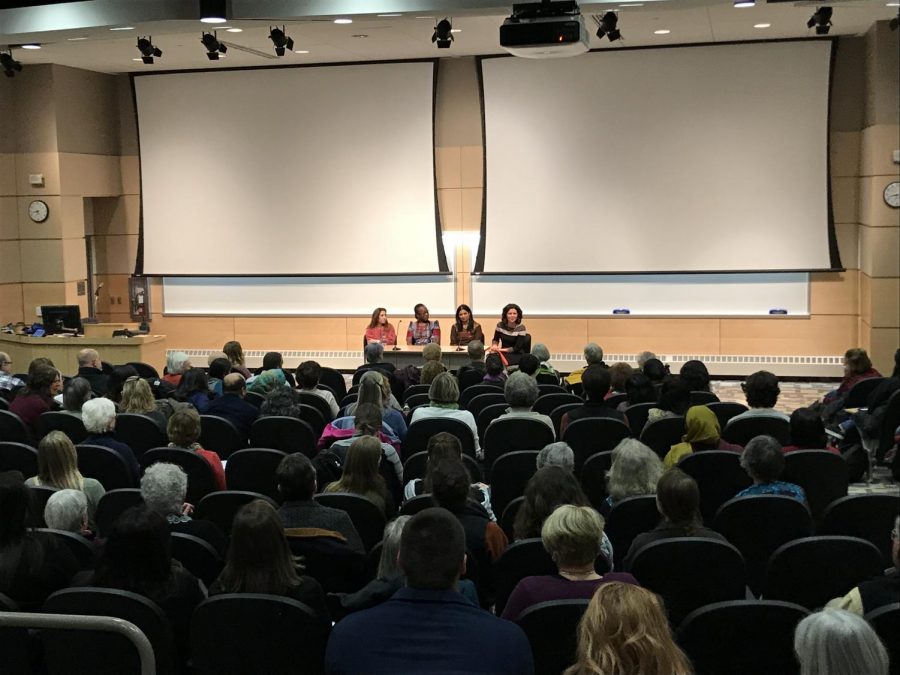 International Women’s Day is a holiday in which “women are recognized for their achievements without regard to divisions, whether national, ethnic, linguistic, cultural, economic or political” (UN.com). Now more than ever, we need to celebrate women and empower them to continue the fight for human rights.

La Crosse Central High students recognize the lack of equality from a personal level. Members of the “Feminist Equity Movement” – Lucy Franklin, Marley Richmond, and Jenny Hamann– had a table set up at the Women’s Day panel in the Hall of Nations. The three girls were selling ethically made shirts that read, “This is what a Feminist looks like” and all proceeds went to New Horizons.

Richmond commented on the idea of the shirts, “We wanted to fundraise for the New Horizons shelter and show that by wearing these shirts, anyone can be a feminist. There is diversity within the feminist movement and we wanted people to feel proud to say they are a feminist.”

Hamann added, “The culture at Central around feminists is not good. Most people label feminists as negative and we want to prove that that is not true.”

Newcomer Franklin concluded, “I got motivated to join during the election because women’s rights was a topic being discussed and I was curious on the feminist movement.”

After the light refreshment hour, the attendees moved into a lecture hall to hear the guests of honor speak. The goal of the panel was to “combat racism in communities and promote a global understanding of feminism.”

This year was the 6th year of the panel at UWL. There were thirteen sponsors in the La Crosse area. The sponsors each send one representative to the planning meeting and nominate a woman to serve on the panel for the spring.

For this Women’s Day, the four women came from the countries of Columbia, Ghana, India, and Romania. The women shared their immigration narratives, discussing human rights issues in their countries and their personal testimony of the differences they have encountered.

Lynda Crowley from Columbia is full time anti-human trafficking advocate who is also attending the Western Technical paralegal program to further her career. She came to America in 2015 motivated to succeed in America after the economic depression.

Crowley primarily discussed Columbia and their human rights violations over the years. She began with, “Until 1954, women were not citizens in Columbia. In 1955, women got the right to vote, but only voted how the man in their lives did. Until 1980, women caught having an affair could be captured and killed.”

Women in Columbia are often at risk for violent behavior. Crowley told us , “Every day in Columbia three women are killed.”

Crowley has always been driven to help others; she stated, “I am a human being that helps other human beings find a new horizon in their lives after having their dignity taken away. Thank you to women for never giving up.”

Angela Amoako from Ghana discussed her experiences as a current student in the master’s program of microbiology at University of Wisconsin – La Crosse and her past life in her home country.

Amoako started with, “Ghana had the same primary education for girls and boys until they reached the secondary level. They have an unforgiving system that makes it more difficult for women to get an education.”

Most of the housework in Ghana is also gendered. Amoako added, “There was a gender tone in many aspects of Ghana society. Girls tended to the home and boys did whatever they wanted. We were told we must learn how to cook to feed and please our husbands. Attaching a women’s worth with being able to take care of her husband or not and being solely known as ‘Mrs. XYZ’ makes women stop dreaming.”

There are many societal pressures in Ghana for women to get married. Amoako shared, “I never had a boyfriend and then when I entered my twenties everyone was asking me when I was going to get married. I didn’t know what to say, I never had these expectations before. Many women are pushed to seek out relationships that end up not being good for them.”

Amoako concluded with, “Ghana still has a lot of work to do. Less than 11 percent of government officials are women and this has been the same statistic since 1992. I am waiting for the day we have a female president in Ghana, and I hope I am able to see that.”

Puja Mehta from India added to the conversation with a personal perspective. Mehta began with, “I was a rebel. I wouldn’t go to embroidery class or cooking class, and I would wear pants.”

Mehta explained that Indian women are forced into gender roles but they are not the weak-willed people society expects them to be – “There is no way an Indian woman is weak, they can be anything BUT weak.”

Mehta also offered an interesting comment that most advocates forget, “This is not just an issue of men not respecting women. Women also do not respect other women. We must lift each other up and spread awareness and be a united front for human rights. India is in everyone. If anyone believes in equality, then they believe in India.”

The final speaker was Cristina Kovacs from Romania. Kovacs said, “I have spent half of my life in Romania and half of it in America. I applied for the green card lottery system and won a spot. Romania was a communist society and I was young and adventurous and wanted a new start.”

Kovacs discussed living in a communist country, “We were kept in the dark. I didn’t know any other kind of life so it seemed normal. You couldn’t speak up; freedom of speech was nonexistent.”

Equality has shifted over the years in Romania. Kovacs noted, “Women were sometimes beaten by their husbands because whatever went wrong was their fault, and marriage was seen as a tactic of submission. The restraining order was just introduced six years ago, thankfully.”

In a country where its citizens are uninformed, Kovacs stated, “If you only know what is around you and no one explains what is on the outside world, you cannot think on a larger scale. Education is the key to promoting change.”

The Women’s Day panel lead to informative discussions about immigrant narratives. On a broader notion, we must celebrate and empower women every single day, not just on Women’s Day. “Strong Women – May we know them, May we be them, May we raise them.”