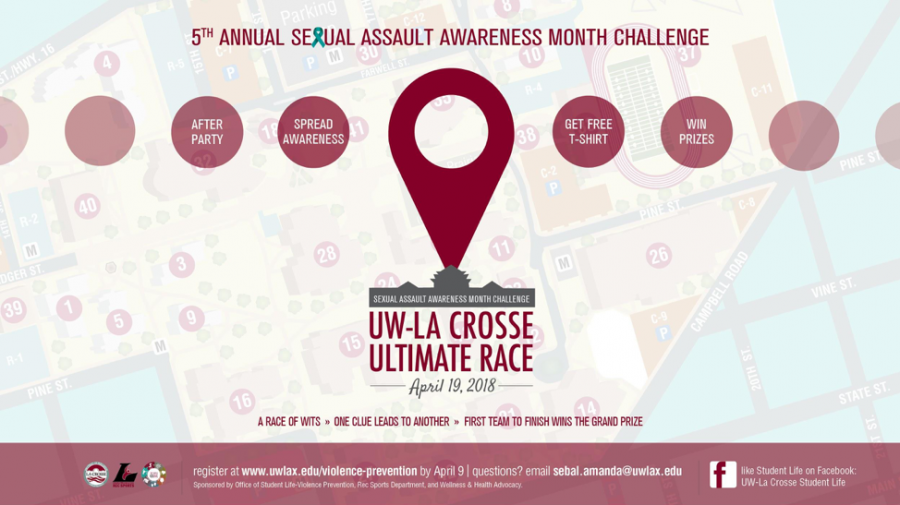 On Thursday, April 19 seventeen teams of three to five people will meet at the Clock Tower to begin the Fifth Annual Ultimate Race. The race this year will be highlighting April’s designated significance as sexual assault awareness month. The race itself is based off the TV Show, The Amazing Race.

Participants will compete at different stations around campus to win prizes. At each station, there will be clues that the team will have to figure out in order to advance to the next station. The event will be topped off with a celebration that includes snack and various prizes.

Amanda Sebal, a graduate student in the Master of Science in Community Health Education program and this year’s Violence Prevention Graduate Assistant, coordinated this year’s event. “April is Sexual Assault Awareness Month and this issue has been gaining National attention for quite some time,” Sebal stated.

The #MeToo movement comes to mind at the mention of recent events. On Oct. 5 2017, the New York Times published an article detailing Hollywood Producer’s, Harvey Weinstein, allegations of sexual misconduct that dated back years. This unleashed a flood of similar stories in every industry. In Feb., Glamour Magazine put together a list of 80 “high-profile” men that had been accused of sexual misconduct post-Weinstein (Glamour).

Sebal said, “Sexual violence is a serious public health issue that affects millions of men and women.” Sebal added that, “According to the National Sexual Violence Resource Center, 20% – 25% of women and 15% of men well experience sexual assault during their time in college.” The race is to bring further awareness to this on all campuses, not only UWL’s, Sebal commented.

“We want to acknowledge that UWL is aware of this issue, and we and want to recognize that our students are doing something positive on campus to educate and promote awareness about sexual violence,” Sebal said.

Sebal said, “Not only do we want to raise awareness about sexual assault, we want to educate race participants on how to prevent sexual violence.” Sebal continued, “This event is a really great way to show support and advocate for sexual assault awareness.”

UWL Sophomore Kendra Whelan is the Vice President of PAVE, as a part of the PAVE executive team Whelan served on the planning committee for the race. “As members of the committee, [PAVE’s executive’s] helped plan out the after party including location, food, prizes, and activities.” Whelan added, “[We] came up with the idea for a selfie station with “Consent is…” boards, so people can write and share what consent means to them.”

The event will also include an open mic style portion where, “anyone can speak about their experiences without fear of being reported,” Whelan explained. “Ingrid Peterson will be there if anyone needs emotional support,” Whelan added.

As for how the community can become involved in this cause, Whelan explained, “[PAVE’s] hope for next year is to have joint meetings or events with other clubs on campus, to unify the school to show support for victims and survivors in all corners of student life.” PAVE also wants to work closely with the organization RARC (Rising Against Rape Culture) and other groups that are bringing awareness to sexual assault.