Viewpoint: Fight the New Drug, what exactly are you fighting? 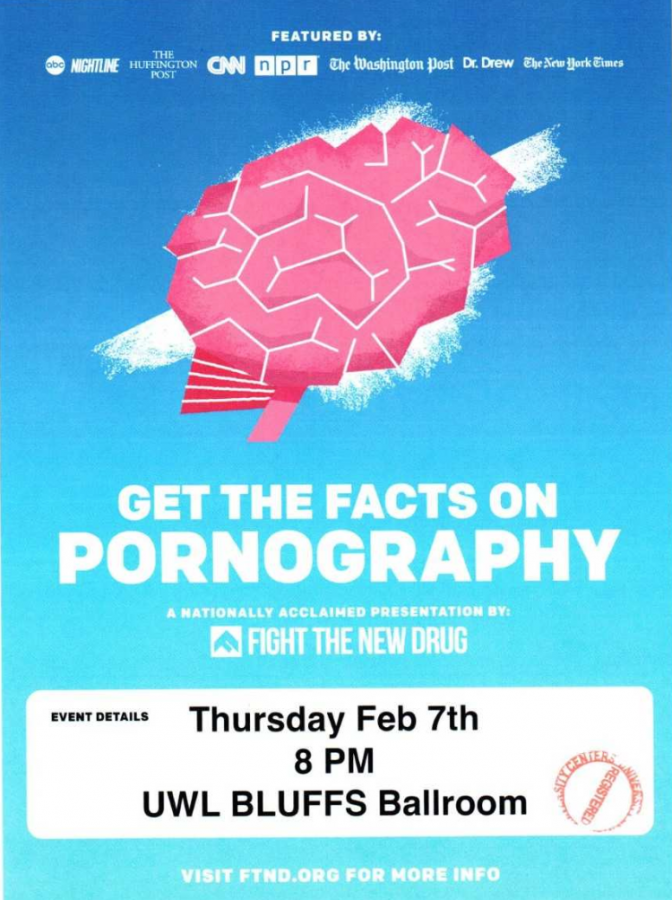 The Fight the New Drug poster for the event on February 7, 2019.

The pornography industry is corrupt, and this is not a hard concept to understand, but the way that this ideology is executed through different platforms is one that is constantly shifting. We can all agree that pornography, as an active member of our society, must be reassessed, but through education reform and activism, not temporary face-value conclusions.

University of Wisconsin – La Crosse’s chapter of CRU, Campus Crusade for Christ, is hosting the anti-pornography group, Fight the New Drug on Thursday, Feb.  7 at 8 p.m. FTND works to dismantle the pornography industry by selling perfectly marketed t-shirts and offering ‘scientific’ facts on the many ways pornography can impact your brain, relationships, and our society. This is not a conversation about whether pornography has consequences and flaws because we all know this to be evident. This is a conversation about how a strategic marketing team can sell shame and produce empty societal change.

While FTND explicitly states on their website, “our presentations, like our content, are not religious or political,” CRU opened them with too wide of arms willing to brand their religious affiliation across the forefront of a ‘non-religious’ hoax.

In an interview with Desert News, Clay Olson, founder of FTND spoke of the mission: “Our goal at Fight the New Drug is to decrease the demand for pornography through education. It’s not a religious or moral approach, it’s just the facts. We think that once people in our generation know how manipulative and harmful pornography can be, they won’t want to have anything to do with it.”

Olson and the other key founders of FTND were all affiliated with the Mormon church. Olson even went as far as to present his beliefs on pornography at the 11th annual Utah Coalition against Pornography conference in 2013, which focused on faith and the Bible as justification and reason to educate the youth about the trends and horror of pornography. Although not all speakers used religious rhetoric as an aim of encouragement and reason, Olson willingly entered a space where he knew this rhetoric would be the igniting flame and did not bother to remove himself from such controversy but felt comfortable in limbo.

FTND prides itself in being scientifically based, ‘just the facts’ as Olson quoted. FTND’s director of research, Dr. Jason Carroll is a professor of Marriage and Family Studies in the School of Family Life at the Mormon-owned Brigham Young University. One of his research interests is what he coins, “modern threats to marriage” such as pornography, delayed age at marriage, materialism, premarital sexuality, and non-marital childbirth.

While projecting anti-sex positive rhetoric around campus, Carroll filed a brief in 2014 in Bostic v. Shaefer – a lawsuit that successfully challenged Virginia’s same-sex marriage ban – defending the state and arguing that, “Traditional, gendered marriage is the most important way heterosexual men create their masculine identities. Marriage forms and channels that masculinity into the service of their children and society. Redefining marriage to include same-sex couples would eliminate gender as a crucial element of marriage and thus undermine marriage’s power to shape and guide masculinity for those beneficial ends.”

While being in charge of all of the researched content that FTND uploads on their website, Caroll was spouting LGBT hate speech through the Virginia legal system. We can never be certain if this lawsuit played a role in the FTND platform, but by using a critical lens and patterns of implicit biases that the director of research displayed, there is a plausible reason to believe there is a strong undertone throughout the entire FTND hierarchy.

FTND relies on peer-reviewed journals with quotes from other popular anti-porn websites. Dr. David Ley, a psychologist who specializes in sexuality issues and the author of The Myth of Sex Addiction, did an audit of the FTND research and told The Daily Beast that it was, “Extremely one-sided and is not composed of empirical studies on the actual effects of pornography. Instead, their citations largely include writings in pop psychology and by writers who are not conducting actual research, and who do not have backgrounds in sexuality research or treatment.”

The most obvious claim of FTND is that pornography affects the brain, “like a drug,” as their website says. In an Op-ed by sex therapists published in The Salt Lake Tribune in 2016, entitled “Utah students’ needs real sex ed, not ‘Fight the New Drug,” therapists discussed how FTND uses a targeted audience and zeroes in on their insecurities.

FTND claimed that, “Cutting back on pornography can lead to withdrawal symptoms.”

From undertones of anti-masturbation ideology, shameful connotation, and Mormon syllogism, despite claiming that they have no religious affiliation, FTND has failed to attack the real issue that people have with pornography – sex trafficking.

There are alternatives, and they must be discussed. FTND has found a capitalistic solution to an individual, systematic problem. They are not creating real change. They are using the insecurities of girls in heterosexual relationships who may have not explored themselves as sexual beings and young men who are dealing with guilt and toxic-masculinity concerns and worries of being coined “that guy.” All while chanting their Mormon, white-feminism in unison.