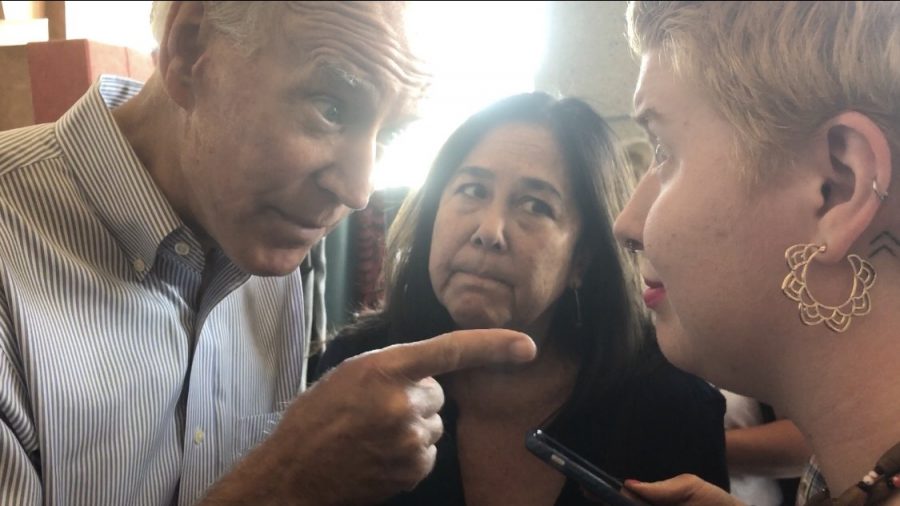 Cayo is studying English and political science with aspirations of going to law school. Cayo has been heavily involved in the UWL community both on and off-campus and defines themselves as “an activist that happens to be a student.”

Cayo said, “I reached out and grabbed his hand and went into our second attempt after he did not have an answer to our first question about court systems. We mentioned we were at the Kavanaugh hearings and said we were worried about his stance on Roe v. Wade and the Hyde Amendment. He then asked me why we were worried.”

Cayo went on to say, “I was very confused at first until I realized that this was going to be the tactic he’d use for the entire conversation.” Cayo clarified to Biden that they were concerned about Biden’s original stance on the Hyde Amendment. Cayo then began explaining their concern but was cut short when, as they described, Biden interrupted them. “I don’t like it when men interrupt my sentences because they so often do,” said Cayo.

After Cayo responded to Biden, he said, “Nobody has spoken about it, done more, or changed more than I have for women.” Cayo then asked Biden to prove this statement and follow through with his claims.

According to Cayo, Biden responded, “Prove it?” Cayo then said, “This is when he leaned forward and shook his hand in my face, shook his finger in my face, which is where that photo came from.” Cayo added, “His eyebrows furrowed, he looked very serious, he leaned over me, and he was very intimidating.”

Cayo said, “He started to raise his voice, and for a hot second, right when he first raised his hand, like just for a crazy moment in my head, I thought, ‘He’s about to hit me. He’s going to slap me in the face right now and I’m going to be the person who got slapped in the face by a Vice President’.”

Cayo reflected on this moment and said, “It seems absurd. I don’t know, for a second I thought he was really about to slap me across the face.” Cayo then said, “And I know a part of that is when men get angry we’re conditioned to react that way because of the history of trauma and abuse of women, and I rationalize that now, but for a second I was genuinely, genuinely concerned.”

Cayo explained what happened after the picture was taken. “I said Biden, sir, we’re talking about Hyde and he said ‘Thank you’ and turned his back on us.” This is when Cayo said to Biden’s turned back, “We deserve better!”

Cayo explained that this line had not been planned, like much of the interaction, but was what came to mind as Biden walked away.

Cayo served as a first-year senator last year for UWL’s Student Association as well as being a member of the organization “One” and are also interested in creating a chapter of “Next Gen” at UWL. Cayo has also served as a Regional Director for the western region of the Women’s March Wisconsin for the last year and a half.

Cayo explained, “When I saw Women’s March was hiring, I jumped on it and was entirely unqualified, I had only worked food service jobs, and there was nothing to my name to say I’d be a good organizer or social justice activist and they were like, ‘Oh cool, you have passion, you care, you want to change the world, cool, join us to dismantle oppression.’”

“Every activist started out by applying to a job they were in no way qualified for, that seems to be the trend,” said Cayo.

Cayo said, “I have done a lot of stuff since being at UWL. There are so many things to learn about.” Cayo mentioned their involvement as an active member of the pride center on campus and their sexuality as “gay as hell.”

Looking forward, Cayo said, “I’m hoping that over the summer, I’ll be able to birddog. The end goal is that if we ask about the courts enough, it’ll be a question that makes it to the debates, for Democratic and Republican and later on when it’s the nominees.”

Cayo wanted to leave the UWL community with this statement: “There are ways to have more agency than retweeting a hashtag if you look for them and you’re willing to fight for them.”

Cayo added, “People think that they can’t change the world, but if you’re able and willing and privileged enough to do it, there’s no harm in trying.”