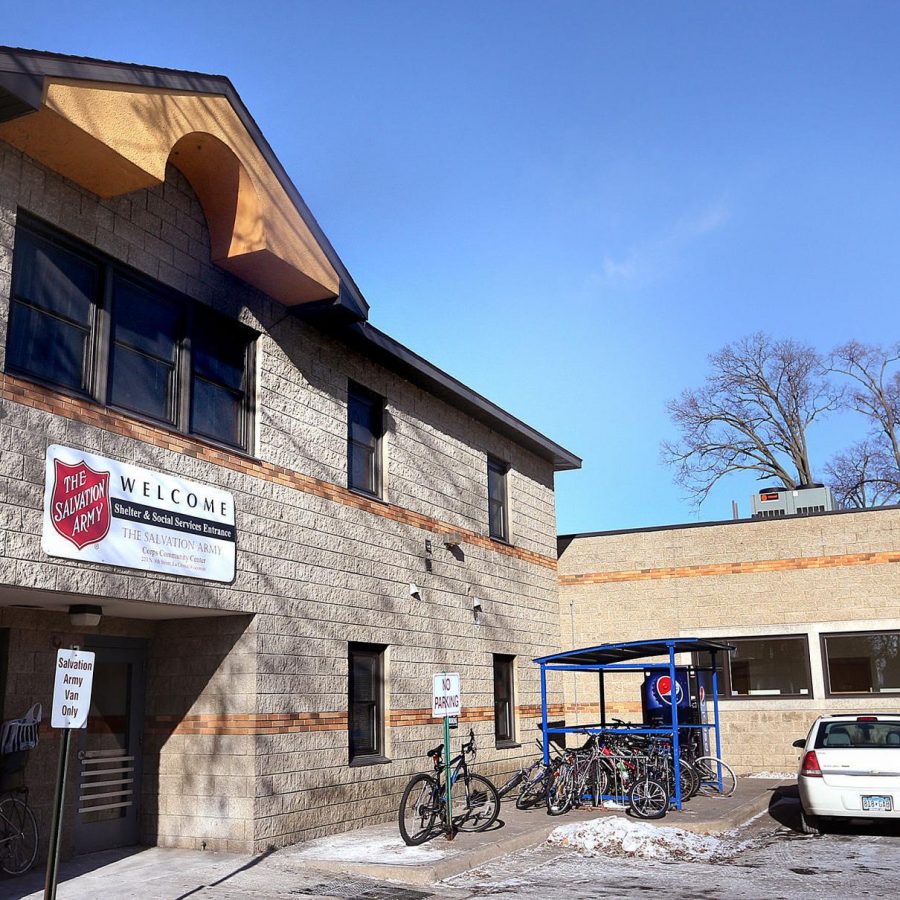 The Salvation Army building in La Crosse serves a duality of purposes. Within its walls, there is office space, the brick and mortar locations for community resources, and homeless shelter which, during emergency situations, can house up to 71 people at a time. On Sept. 13, an average day, the shelter was housing 47 guests.

The shelter provides resources for people living in severe poverty in the La Crosse area, many of whom fall under the category of homeless. According to Krista Coey, the organization’s Social Services Director, the shelter provides more than just a home to those in need. They also serve three meals a day to anyone who chooses to stop by and utilize the meal program, as well as a separate food pantry. They provide furniture vouchers and clothing vouchers from their thrift store to anyone who needs assistance purchasing essential items for house and self, procure bus tokens to shelter members who need transportation, and diaper allotments to struggling parents. They also do eviction prevention in the community and give out housing vouchers to those who qualify.

Funding for these endeavors comes from government grants, support for veterans from the Veteran’s Administration, different organizations around the La Crosse area who donate or help to fundraise, personal donations, private grants, and the annual Red Kettle Campaign — which according to the Salvation Army’s website, brings in more than a third of their annual budget. The total number of people who use these services, “is in the high 800’s,” said Coey.

“We do see the stereotypical mental health and addictions population, but another big population that I don’t think the community realizes is our aging population, our elderly, who have one at one point or another encountered some medical setback. A lot of our individuals had been in a house 20, 30, 40 years — we had an individual who had pancreatic cancer— and they are unable to keep up with their medical bills and their housing at the same time, and so they are discharged from the hospital into homelessness because they couldn’t keep up and don’t have familial support in the area. This is probably our fastest-growing population right now. The other is young kids,” said Coey.

She also mentioned the presence of families and singles alike. “The other fast-growing population we have is young kids who age out of foster care into homelessness. They don’t have the tools or were robbed of the tools, to be successful, so we often see them here.”

Daniella Fohr, Case Manager for the Salvation Army, says that she sees trauma as the common denominator between many of the people she has a relationship with at the shelter and both her and Coey agree this is present is every person who comes through. “I personally think that the root cause of homelessness is traumatic backgrounds and what that then ends up manifesting as in adulthood,” said Fohr.

“Overall you could say it’s a lack of support. I mean because these traumatic backgrounds come from a lack of positive support from infancy to childhood. A lot of these people are brought up in homes where violence and drug use and abuse and trafficking and things like that are a common occurrence. There is no person in the entire world that you could take and put through that situation and have them come out on the other side and be okay and be able to function in society the way people would expect you to, or feel that they should be expected to,” said Coey. “And I think that that’s the biggest thing is lack of support. Someone needs to be able to step in and rescue. We are the organization that runs in when everyone else is running out.”

Adding to the community of the shelter, are students. University of Wisconsin-La Crosse, Viterbo, and Western Technical College students all contribute to the shelter’s population. According to Kathy Volk, director of pupil services for Jefferson County, homelessness among students is not a new phenomenon. Her research was found quoted in a segment on homeless students done in Jefferson County; “Volk noted that statewide, 2 percent of all students fit into this legal definition of homelessness. That number has quadrupled over the last 10 years, and Volk said she still believes the phenomenon is under-reported.”

Coey also mentioned how those same students who struggle to pay for meal plans during the school year aren’t served during the summer, so they often use the Salvation Army as a resource during those months.

Homelessness in America has been a recurrent phenomenon since the 1870s, at which point the word was used to describe people who would roam around the country in search of work. In 1987, the United States government deemed the issue valid enough to warrant its own committee; the United States Interagency Council on Homelessness, whose goal was to eliminate chronic homelessness by 2015. Since then, the word has been followed by a very specific tone of connotations. “The homeless population is the most feared and misunderstood population, ever,” said Coey.

In recent years, city planners have taken an initiative in the issue. The topic of Defensive Architecture, sometimes known as hostile design, has been introduced in many areas. The technique is defined as:

“An intentional design strategy that uses elements of the built environment to guide or restrict behavior in urban space as a form of crime prevention or order maintenance.”

Andrea Lo, CNN reporter, defined the topic as, “a type of urban design usually aimed at preventing people from using public spaces in undesirable ways. It can come in the form of spiked or sloped benches, bolts installed on shop doorsteps and windowsills, and even water features that operate at surprising intervals on flat surfaces.” She goes on to describe its controversiality. “While use of design to block homeless people from finding a place to sleep or young people from skating in public angers many people, others feel it’s a necessary measure to secure public safety.”

“I remember one time in three and a half years feeling slightly afraid. This is such a loving and welcoming community, I don’t feel in danger. And to see people shy away, and to get phone calls about people sleeping in the park… the reality is you take them out of the park where — and I’m not even sure how that bothers people — and then where do they go? You’re just taking the problem and putting it someplace else, and they go to parking garages or other places wherever they feel safe.”

“If we could get more people to understand what trauma does to people, I think that’s how we’ll start to see change in the future. We have to be educating parents when their kids are little,” said Fohr.

“Stigma needs to change,” added Coey, “The world is changing so fast and so rapidly with the changing generations. I mean sexuality and transgender connotations have changed, all of these things are things are changing with the times and with people and effort. And when mental health care and addiction and social class discrepancies become just as acceptable, that’s when I think we’ll see change. When someone doesn’t feel looked down upon for walking into a mental health facility saying ‘I need help.’’’

To get involved check out these resources: