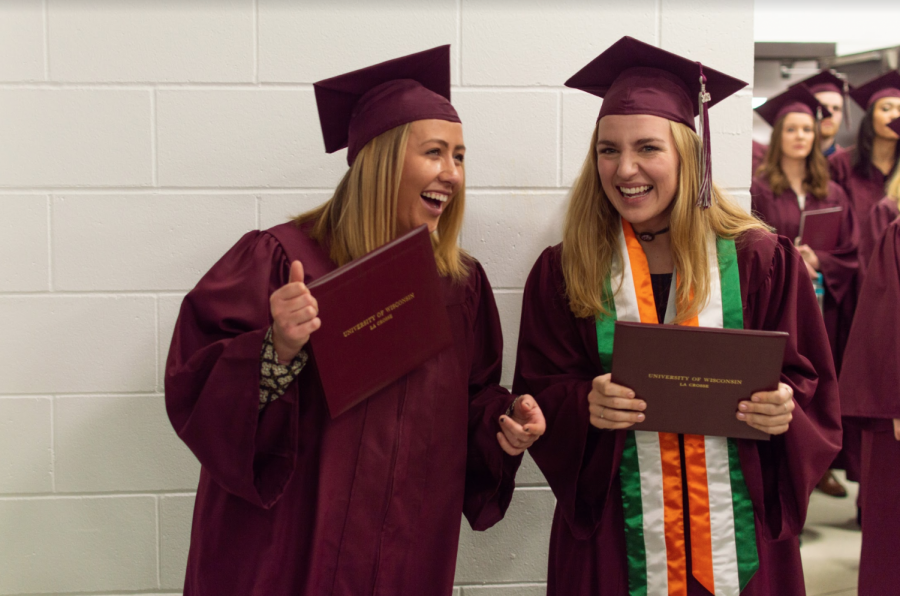 University of Wisconsin-La Crosse winter commencement was held on Sunday, Dec. 15 at 11 a.m. 725 students received their degrees. The Racquet Press spoke with some students about their time at UWL.

Jorie Collins graduated this semester with a major in public administration and a minor in psychology.

“The relationships I’ve developed throughout college with my roommates inspired me everyday. Living in a house with four smart, independent, lovely women encouraged me to succeed in my academic life so I could help improve the livelihood of the women I’ve grown to love so much in La Crosse as well as around the world,” said Collins.

Collins wore the Ireland sash for her study abroad semester in Ireland in the Spring of 2018. During this time in Ireland, Collins said the woman’s rights movements was surfacing. Women were standing up for the freedom of their bodies. Collins saw how another country dealt with clashes in public policy.

Tori Kempken graduated with a degree in marketing.

“I found inspiration through a variety of surprising individuals in the La Crosse community. My first bosses at Fayze’s, Kelsey and Drew Williams were so supportive of my education and helped me figure out how to work and manage school. I had support from La Crosse locals who were pursuing different avenues other than higher education; they helped me understand there’s more to life than school, and taught me more about the city of La Crosse than anyone else could,” said Kempken.

“I connected with different professors, especially Dr. Brokaw, my last semester here at UWL. He taught me valuable life lessons I couldn’t learn in a classroom. And lastly, my roommates, who became my family over the last four and a half years. I’m surrounded by strong women who never gave up on each other. All of these people believed in me when I couldn’t believe in myself,” said Kempken.