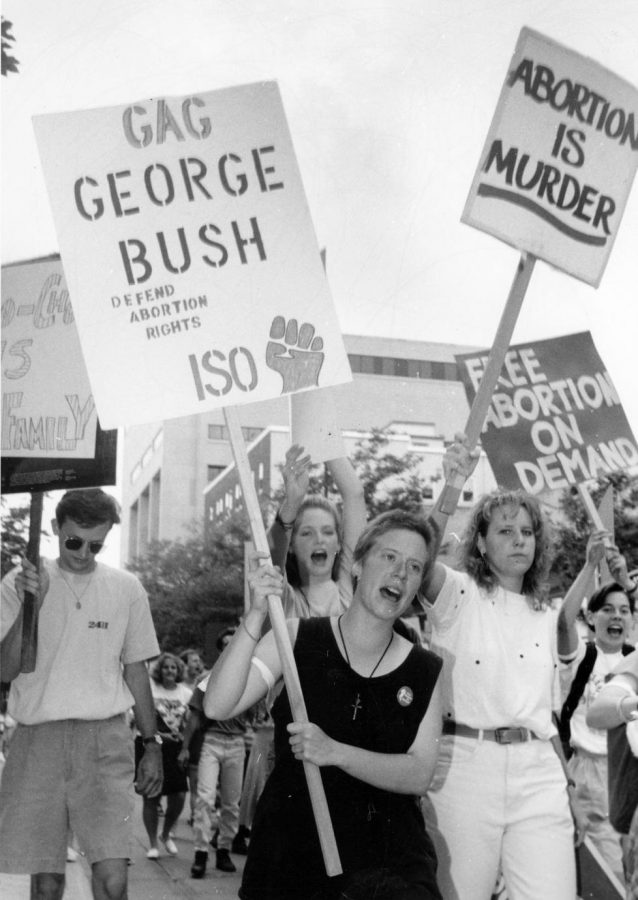 Abortion Rally at UW-Madison, 1992. Retrieved from the UW system archives.

On Jan. 22, 1973, the Supreme Court ruled that a woman’s right to make her own medical decisions, including the choice to have an abortion, was protected under the 14th Amendment

Norma McCorvey, under the pseudonym “Jane Roe,” was looking to terminate an unwanted pregnancy. McCorvey was 22 years old, unmarried, and living in Texas, where abortion was prohibited except for under circumstances. McCorvey sued Henry Wade, the Dallas County district attorney, for the right to an abortion. The case was passed to the Supreme Court in 1970.

While the Supreme Court ruled the right to safe and legal abortions, it stipulated that states had the right to make their own laws about second and third-trimester abortions. The Supreme Court ruling sparked major controversy and has faced many attempts to be overturned. Many states have passed bills restricting abortion laws, but Roe v. Wade, has yet to be overturned.

In Dec. 2019, over 200 members of Congress made a request to the Supreme Court to revisit the case. According to the Center for Reproductive Rights, if Roe v. Wade were to be overturned, abortion rights lose protection in more than half of U.S states.

The Racquet Press reached out to members of the University of Wisconsin – La Crosse’s student body to record their reactions to the potential overturn.

“Roe v. Wade was the landmark case in which the Supreme Court declared that it was constitutional for women to have the right to abortion up to three months of pregnancy,” said Julia Tutton, President of the UWL branch of Students for Life of America (SFLA). “The overturning of this landmark decision would not make abortion illegal in the United States, nor would it criminalize women who seek abortions. Rather, it would bring the decision regarding abortion legality down to the states. Individuals would have more of a say in the abortion discussion in their state and would have the opportunity to vote themselves for what they want. The request made by Congress was made in response to the 2014 Louisiana case which would require abortion providers to have admitting privileges at nearby hospitals.”

“To me, this law makes sense in terms of taking care of women and children. Having admitting privileges add another level of safety for women who are going through an invasive and violent medical procedure,” said Tutton. “This ensures that, in case of emergency for the woman herself or the child of a failed abortion, both receive the appropriate medical care they deserve as human beings. Some argue that this causes an “undue burden” for people seeking abortions, however anything that provides more care and safety for women only makes sense.”

“Although the Roe v. Wade case was, and apparently continues to be, extremely controversial, I don’t think it should be overturned. If a woman, or a childbearing person, wishes to terminate a pregnancy, then they should have the right to,” said UWL freshman Grace Babb.

“Personally, I am unsure whether or not I could terminate a pregnancy of my own: I think it depends heavily upon the situation. However, my own beliefs are deeply tied to my religion and I realize that not everyone thinks the same way I do,” said Babb.

“I find the matter of overturning Roe v. Wade a disturbing one, but not just because of its inherent social controversy. The idea that members of our Congress think that it is even acceptable to overturn, is not only an invasion of our 9th Amendment given the right to privacy but also a gross overstretch of power,” said Helen Clark, UWL freshman.

“The Supreme Court has ruled on the case saying that banning abortions is unconstitutional. For Congress to challenge that is to challenge the very foundation of our governmental system, based on the separation of powers,” said Clark.

“I am objectively against Roe v. Wade as I believe that every person has a right to life, no matter what stage of life they are in,” said Emily Ludewig, member of SFLA, “While I understand that pregnancy can be traumatic, especially in cases of rape, I don’t believe that it is okay to punish the baby for the sins of his/her father. I know that the adoption system also needs work, but I believe that still having the chance at life would be better for the child than ending his/her life without them having the chance to experience it.”

“I realize that many people make the argument that the woman has the right to choose, but by making the choice to have an abortion, the woman is inherently taking away the choice of another person,” said Ludewig. “If everyone should have the right to choose, why does that not apply to the child as well? I would definitely like to see Roe v. Wade revisited and overturned in the future.”

“The members of Congress who believe they are even capable of overturning a Supreme Court decision are either embarrassingly uninformed or simply don’t care to abide by the rules of this nation, upending our core value of checks and balances,” said Clark. “Either way, those in Congress who seek to overturn Roe v. Wade do not belong in such a position of power to speak in good faith on behalf of their constituents.”

Tutton said, “I think that this topic can be so polarizing for people. It is difficult for people to humanize those on the opposite side of the line. One thing that I think we can all find in common is that we love women. No one on either side wants women to suffer.”

“Our society has made us deaf to listening to people who disagree, which is more harmful than helpful. I believe that every human being has inherent dignity from conception to natural death, regardless of gender, creed, social standing, level of wealth, political ideology, etc. I look forward to a culture that respects everyone equally regardless of size, age, gender, race, etc,” said Tutton.

“What I’m really trying to say is that although I may not completely agree with all abortions, I do agree that all women, and all childbearing people, should be entitled to their own decision. Just because I wouldn’t have an abortion doesn’t mean I should stop you from doing so,” said Babb, “I, in no way, believe that Roe v Wade should be overturned. I believe everyone has the right to make their own choice, even if I don’t agree with that choice.”